The Earl of Curl

The ice sparkles, light glittering off the pebbled surface as the lead thrower steps up to the hack. As he gathers his breath and steps toward the hog line to deliver his stone toward the house, his teammates—the second, vice and skip—prepare to sweep the ice, assisting the delivery of the stone as close as they can to the button in the center of the house, assuring the lead the most points possible before stepping out of the way to allow the opposing team their turn at delivering.

This is curling in Oklahoma. 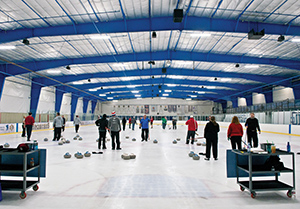 According to Club Communications Director Ryan McGhee, “Curling is a Scottish game deeply rooted in sportsmanship that starts with a handshake and ends with the winning team buying the first round.” What’s not to like about that?

Long a Winter Olympics staple, curling is played on the ice, where four players per team throw handled stones, usually made of Scottish granite and weighing between 38 and 44 pounds, toward the house—a bull’s-eye on the floor. The closer the player gets his or her stone to the button (the center of the bulls-eye), the more points that player gets. Of course, there is always the risk of your stone getting knocked out of the house by a stone from the other team. This is what makes curling a game of skill and strategy, often compared to chess.

Curling can be traced back as far as the mid-1500s, when references were found in paintings and notary records highlighting a game played on frozen ponds where a stone was thrown down the ice three times. Curling spread to the rest of the world in the 1800s as Scottish people settled to other parts of the world and brought their favorite pastime along with them. Curling was included in the first Winter Olympic games in 1924, which marked the first official international curling competition.

The rules were first formally adopted by the Grand Caledonian Curling Club in Edinburgh in 1938, and the sport today keeps to its Scottish roots. Still today, official curling stones used by The World Curling Federation are manufactured only in Scotland, from the granite found at Ailsa Craig.

“The Spirit of Curling” makes the sport unique. According to the World Curling Federation’s website, The Spirit of Curling “refers to the respect curlers show, not only to one another, but also to the sport itself. It is encapsulated by the saying that a curler would rather lose than win unfairly.”

The Oklahoma Curling Club was formed in 2010 to promote curling in Oklahoma. The club can be found at Edmond’s Arctic Edge Ice Arena most Sundays, where they hold classes for beginners and bonspiels—curling tournaments. Even though ice sports aren’t common in Oklahoma, the passion and energy behind curling is palpable.

“This is a sport you can do at any age, just like bowling or golf,” says McGhee. “We’ve had high school students and retirees play here in Oklahoma City. We even have the college team at OU as a part of our club“ The club has curling leagues that compete in the fall, winter and spring. “The leagues usually run on Sundays for eight to nine weeks, depending on how many teams sign up.” There are usually two leagues with eight or nine teams each competing each season. 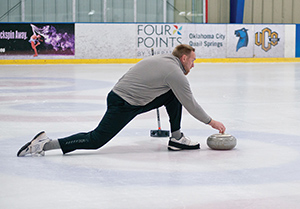 The OK Curling Club has about 60 members—and the membership always surges during the Winter Olympics. “I first discovered curling during the Torino Olympics on 2006,” said McGhee. “My college roommate and I thought it sounded fun, so we attended an open house at a club in Dallas. We both liked it, but didn’t want to drive that far to play. Fast forward four years and the OK Curling Club was founded and I jumped at the opportunity to play locally.”

It’s not all concentration and hard stares on the ice; yes, there may be yelling and shouting from the skip (team captain) throwing out instructions, but it’s a social game. “My favorite part is the social aspect,” says McGhee, “I’ve met some of my best friends through Oklahoma Curling Club. It’s a friendly sport and everyone is made to feel welcome.”

Worried about slipping on the ice? “I have been playing for six years and I still fall on the ice. It’s part of the game and shouldn’t keep someone who is interested from playing,” said McGhee.

“Curling has something for everyone,” says McGhee. “It’s fun, it’s great exercise and you can be as competitive as you want.” And it’s an easy sport to get started in. The Oklahoma Curling Club holds learn-to-curl sessions, usually prior to each league. “There, you can come get a hands-on introduction to the sport from USCA-certified instructors.”

$25 to pay for ice time. Wear warm, loose-fitting clothing (all special equipment is provided by the club). Next Session is scheduled for December 6, 4-6pm at the Arctic Edge Ice Arena in Edmond. Visit www.okcurling.com to get started.

Button: The small circle at the center of the House, where the most points are.

Delivering/Throwing: Sliding a curling stone down the ice.

Hack: Where players push off from to deliver stones.

Hog line: The line at which the stone must be released.

House: The 12-foot wide circle at the end of the ice where stones are delivered for points.

Pebble: water droplets applied to the ice to give it texture and provide a more effective sliding surface.

Sheet: The ice where a match is played.

Sweeping: Using a synthetic broom on the ice to impact direction and speed of the curling stone.

Vice: Player who throws third; player in charge when Skip is throwing. 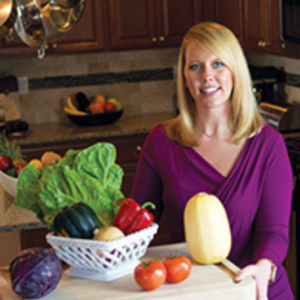 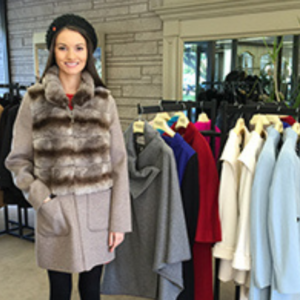 Bundle Up In Style

by Chloe Shelby
From ruanas to fringe, discover the season's best winter fashions that keep you warm
Read More  >