Alison and I took a road trip to Arlington, Texas last weekend to attend the Eagles concert. I got some tickets on the floor and figured it would be a good get-out-of-town weekend.

If you haven’t attended a concert at the AT&T stadium, let me fill you in. It’s huge. You could fit at least 2 Chesapeake Arenas in there. Even with decent floor seats, we felt miles away. Chris Stapleton opened for the Eagles. I’m not really familiar with his music but some guys wearing cowboy hats a few rows in front of us seemed really excited.

So, the Eagles come out and nearly 100,000 aging boomers go wild. Back in the ‘90s the Eagles had a tour called Hell Freezes Over (cause they all got over their differences and got back together – probably to pay some bills). I think this tour could be called Memory Loss Takes Over. Lyrics were missed, the audience was welcomed with a “Helllllo Houston” (oops), and voices weren’t what they used to be. Let’s just say half the band took it to the limit, and the other half took it easy.

But some things never change. Fans will be fans, and when you serve alcohol, some fans become amazing people-watching material. There was a disturbance a couple of rows behind us – two women in their 60s were pulling hair and slapping each other – all because of a spilled beer. Security got the two separated and calmed down. The officers kind of looked like they were lecturing their moms.

Even with a marked increase of oxygen tanks and mobility scooters among the concert attendees, count me in for their next tour. I could always use a reminder that “Life’s Been Good” – as Joe Walsh likes to sing … and he should know, he’s 70. 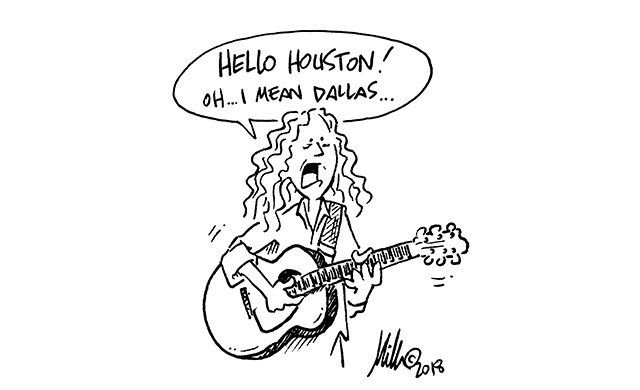