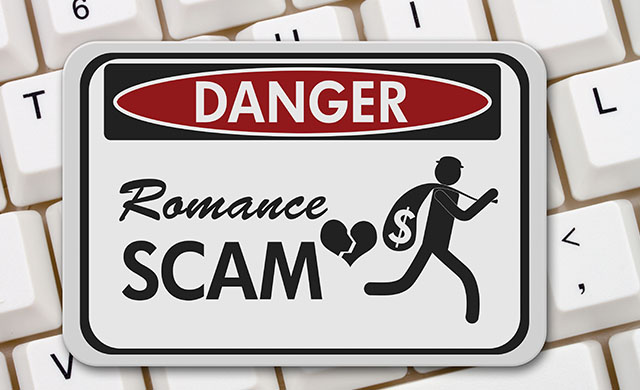 A while back, I wrote a story called The Dating Game. Basically, I gave my limited experience into the world of online dating. After that story was published, I heard from several women concerning the other side of online dating—those who were scammed. Each asked me to write about the subject so I’m sharing a few of their stories.

A friend in OKC told how she became so enamored with a gentleman online that she almost fell hook, line and sinker for his scam. After months of communication, they were finally going to meet. However, he had a company emergency while out of state and his bank would not release funds to cover the expense because he never did business online. Could she possibly send the money and he would pay her back when he saw her? Only after confiding in a friend was she able to see it was a scam and not respond, saving thousands of dollars.

Another woman thought she was about to meet the man of her dreams. He wrote lovely, flowery emails and could hardly wait to meet her but was transferred from one place to another. She got suspicious and found an online site that exposed scammers. Sure enough, there he was. She saw emails to others that were verbatim to what he had sent to her. He also used the picture of some gentleman who had no idea his identity was stolen and used online.

Many reading this wonder how this could possibly happen and are certain they would never fall for such a ploy. Don’t get too comfortable with that thought. In the last year, I have heard innumerable stories and one of the worst was from a lady in Kansas.

She met her prince charming online and they had a long distance relationship. Though he lived in another state, they would meet halfway at least once a month and he even spent time in her home. More than a year later, the romance had blossomed and they planned to be married. At least that was her plan until she found he was dating two other women in another state, even living part-time with them. Besides the heartache of a broken relationship, she had loaned him money. After all, they were planning marriage and she trusted him implicitly. The money was never returned and she discovered he had also scammed money from the other ladies.

Though none of the above women lost hundreds of thousands of dollars like the scams highlighted in newspapers and TV, they still lost personal savings along with some self-respect and trust. They felt betrayed and violated.

And these scams do not happen to women only. TV personality, Dr. Phil, had a program where he revealed a woman who had stolen someone’s picture identity and scammed a gentleman out of more than $200,000.

And yes, there are some positive online stories where couples meet, marry and are living the happy ever after dream, but it is the exception.

The message is to be extremely careful. Do everything you can to protect yourself. Do background checks. Though they will not show any type of online scam, at least you can know a little about their employment history and any legal problems involved. Move slowly with your online relationship and get to know them as a friend before plunging into the romantic realm. Meet in a public place for your first face-to-face date and always tell someone where you will be.

If your relationship becomes serious, introduce him/her to family and friends. Ask their opinions. Always beware of anyone who immediately wants your personal contact info while on a dating site or tries to isolate you after meeting in person and doesn’t want to meet your family. One lady went out with a man who eventually became a stalker. Also be cautious if you only hear about friends, family or grown children but never meet them. This could be reason for concern.

For those who are still hoping to meet a soul mate online, I hope you do. Just remember, if your online sweetheart seems too good to be true, he/ she just may be exactly that.

Louise TuckerJones is an award-winning author, inspirational speaker & founder of Wives With Heavenly Husbands, a support group for widows. LouiseTJ@cox.net or LouiseTuckerJones.com.