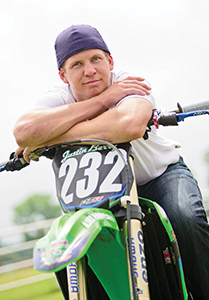 The day was shimmered in
110-degree heat on the day Justin Berry flew through the air into the
unforgiving branches of a tree and lost not only his ability to walk, but his
ability to talk, see, write and even hold basic objects.

On July 10, 2010, Oklahoma
melted under a brutal summer, but it was the kind of day that 20-year-olds like
Justin loved. He and his friends took their dirt bikes to the practice track in
Wellston, and as a professional motorcross rider, as well as young and
immortal, Justin liked to push the limits.

He and his friends were jumping
the “table top” over a canyon 45 to 50 feet wide, but the jump, Justin said,
was about 180 feet in distance. He only gained 20 feet in the air, but maybe
the distance was too far. Maybe the heat caused it.

No one knows what really
happened, but Justin thinks he jumped too far that day. He thinks he landed on
a braking bump—the lump of dirt that rises like a small mountain from bikes
braking over and over—but in the end, it doesn’t matter exactly what caused his
bike to “pogo” him over and over and over. His bike flew into the trees while Justin
rolled right after it.

And the hot world went dark. 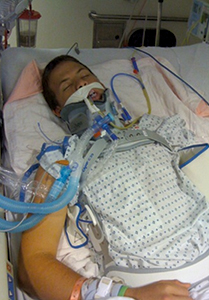 In that crash, Justin broke his
back in four places, his hip and a collarbone. His worst injury was inside his
skull, where his brain swelled and began to lose vital information. After being
in a coma for two weeks, the 20-year-old rising motorcross star found he
couldn’t walk. He forgot how to talk. He couldn’t perform basic motor skills.

“I was in the hospital for two months, had
physical therapy for speech and had to work on writing,” said Justin, who three
years later shows no sign of any difficulty with either walking or talking. “I
had brain bleeds in four places. I guess I was expecting to just wake up one
day and have it all back. I wish it did happen like that, but it was tough,
hard work and I had to stay positive.”

Three years later, 23-year-old
Justin walks just fine. He talks like a pro and his once-crooked,
half-paralyzed smile is as charming as a country boy’s smile should be.

He flashes that smile as he
climbs back onto his dirt bike.

Justin Berry raced his first
motorcross race when he was eight years old, but the love of the roaring bikes
flying over humps and ramps hit him when he saw his first motorcross race at
the Lazy E Arena at the ripe young age of five. He got his first bike that same
year.

“I loved it,” he said. “Watching
a race for the first time got my adrenaline going and I wanted to get on a bike
and just go fast. It’s not a team sport, you know. If you lose, you lose on
your own—and you go back on your own and work until you get better.”

Justin doesn’t remember that
first race he had at the Lazy E Arena. He’s pretty sure he didn’t race worth a
darn, but winning wasn’t the point at that time. It was about having fun. It
was about going fast. Soon he was at a track at SW 54th and Douglas on a
regular basis, a fact his baseball coaches weren’t happy about. “They told me
that it came down to picking one or the other,” Justin said. “Wow. I was only
eight and I was told this? Well, I stuck with motorcross.” 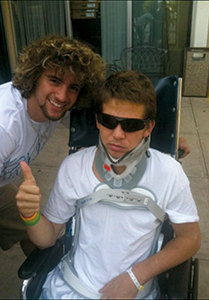 Continuing to race at the track,
Justin eventually joined the Amateur Nationals circuit, running his dirt bike
on tracks in Las Vegas, Texas and Tennessee. He was 12. “When I was 16, almost
17, I turned pro,” Justin said. “I was a junior in high school, so I was
homeschooled so I could race. Most of the time, you go from Amateur to
Arenacross and then to Supercross. I skipped Arenacross and went to nationals.
It was big time.”

Although he raced at the Texas Freestone
and the Colorado Thunder Valley, Justin knew he had to improve. He wasn’t in
the shape he needed to be in to win, although he did win a race in El Reno. He
had to practice more. He had to push himself.

So he headed out to Wellston
that hot, blistering summer day to do just that.

When Justin woke in the hospital
two weeks after his accident, he remembered nothing of what happened to him.

“Walking took a long time to
relearn, but I promised myself I’d walk out of that hospital, and I did,”
Justin said. “Of course, they tied a belt around my waist so they could catch
me if I fell.”

Besides learning his basic motor
skills again, Justin had to learn to see as well. The traumatic fall knocked
his eyeballs loose, and his left eye drooped down while his right eye cocked
upwards. He had no depth perception at all. 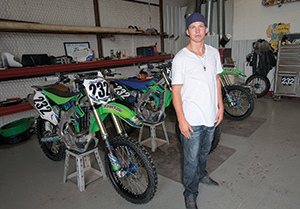 “I had eye surgery on November
10, 2011, and the doctor fixed the muscles in my eyes, but he said he didn’t
want to see me again until February,” said Justin. “A week went by, and my eyes
were still messed up. A few weeks went by, still messed up. A month went by,
and still messed up.” On February 4, 2012, Justin woke up and his eyesight was
perfect. “Just like that,” he said.

Sometime between the eye surgery
and his vision coming back, Justin got back onto a motorbike for the first time
since his accident. He and his friends went to the Little Sahara Sand Dunes and
“just messed around” a bit.

“I wasn’t scared to ride. I was
scared that I wouldn’t be able to ride like I used to,” he said. “I shocked
myself. I rode easy—even on the jumps and corners with my eyes all messed up.
That day, knowing I could ride—it relieved all the anger and the fear and the
emotions.”

Now, Justin continues to
practice almost daily. With a lot of catching up to do, his goal is to make a
good showing and “give them heck” in October at the Texas Pro Challenge races.
He wants to win. 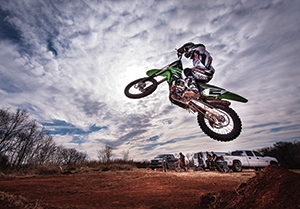 He wants to inspire.

“People who have had a brain
trauma get down on themselves and they think they have nothing,” Justin said.
“I want to show them they can do it. I want to prove to others who suffered a
brain injury that if they stay positive, they can do it. Don’t ever give up.” 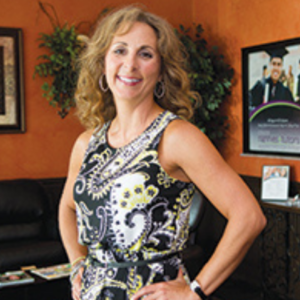 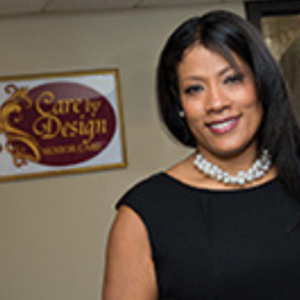