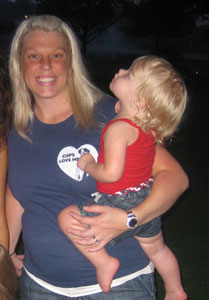 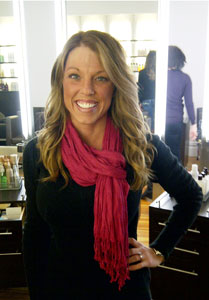 Melissa Kingry’s transformation from being overweight to a toned size 2 was a yearlong journey that taught her patience, endurance and healthy eating habits. But more importantly, it proved that you could go a long way if you are willing to work hard on achieving your goal. “Just making the decision that you are going to do this, it’s not easy,” she said. “It is a life-changing thing.”

Kingry is an Edmond mother of two young girls who works as an engineering technician. During her first pregnancy she gained excessive weight that she wasn’t able to lose. While pregnant a second time she gained even more. At her heaviest, Kingry weighed 200 pounds.

“One day I just woke up, I knew that my husband and I were done having children, and I just thought, OK, now it’s just time to get in shape so that I can keep up with my kids and I can enjoy everything that my kids like to do,” she said. “Also, I really wanted to show a good example to my children as they grow up.”

Several small changes started bringing big results. Kingry started cooking more at home. She prepared healthier meals with grilled chicken and salmon, and incorporated a lot of fresh fruits and vegetables in her diet. She substituted the oil and milk she used with a healthier brand and stopped drinking pop. “That dropped the weight so fast,” she said. Kingry started taking the stairs instead of the elevator at work and bought a treadmill. “At night whenever the girls would go to bed, I would get on the treadmill and start out walking, and then ended up jogging, and later I started running four miles every night.”

Kingry logged everything she ate. “I found that if I wrote it down, I was held more accountable.” Once she figured out how many calories to consume and how many to burn, the progress became obvious. Colleagues and friends started noticing the difference. “Being able to get rid of clothes not just a little too big but way too big, that’s a really good feeling,” she said.

Cooking became a favorite hobby. Kingry began experimenting with healthy recipes for the whole family from blogs and cookbooks. Among her favorite were Rachael Ray’s 30-minute meal ideas. “My husband just enjoyed the fact that I was cooking.” Her daughters loved it, too. She said eating healthy doesn’t mean you need to starve yourself or cut out everything you love to eat. “If you crave a cupcake, have one, but watch what you eat the rest of the day.”

Kingry, who has a busy schedule working full-time and being a mother, said the lack of free time shouldn’t be an excuse for unhealthy habits. Finding the time and motivation could be challenging but it all pays off in the end. “If you are healthy, happy and are taking care of yourself, that reflects on your entire family,” she said.

Kingry wasn’t the only one working hard to lose extra weight. During that time the entire Oklahoma City metro area was challenged by Mayor Mick Cornett to loose 1,000,000 pounds. When Kingry heard about the challenge, she decided to join and started tracking the lost pounds on the campaign’s website. In January the Mayor, who was also on a diet, announced that the goal was met.

The success put the campaign in the national spotlight and a famous television talk show wanted to feature some of the participants. Ten people from the Oklahoma City area were selected to undergo total makeovers on the Rachael Ray Show in New York and Kingry was one of them. Her achievement was going to be recognized by her favorite television personality. “This giant bus showed up at my house,” she said.  “It was crazy.”

Kingry and her fellow Oklahomans stayed in New York for four days and had the chance to update their wardrobe and hairstyle with the help of makeover guru Kyan Douglas and celebrity stylist Ted Gibson. Some participants had lost more than 150 pounds. “Some of the most amazing people I’ve ever met in my life,” said Kingry, “and I can say that there will be friendships there that will carry on forever.”

One of the most exciting and rewarding moments for Kingry was standing backstage right before her appearance and hearing the announcer saying her name and that she had lost 70 pounds. Then she walked on stage in front of the bright lights and the cheering audience. “That wasn’t anything I thought would ever happen,” she said.

Rachael Ray was warm and welcoming. “She really seemed excited for all of us and I think that excitement carried through the room,” recalls Kingry. “I could feel emotions between the 10 of us and I kind of felt that throughout the audience.”

Kingry hopes that her story will encourage more people to start exercising and eating healthier, and to never give up before reaching their own glorious moment of victory.