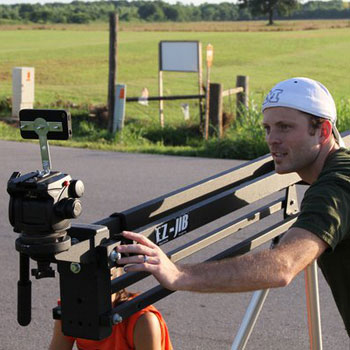 Not long ago, a telephone was just a device that let you talk to someone who was beyond shouting range. A few waves of advancement later, many of us carry movie-quality video cameras (that also happen to make phone calls) in our pockets. Coupled with the advent of YouTube, for the first time in history, the door is truly open for backyard Spielbergs and local filmmaker Kyle Roberts is taking advantage of that fact.

Most recently, Roberts released a video for Defining Times, a local supergroup comprised of talented musicians from some of the metro’s best bands, fronted by The City Lives’ Chase Kerby. It was shot entirely on the GoPro 2, a tiny camera meant to be clipped to bicycle helmets and surf boards. Roberts employed a setting on the camera to film 120 frames per second, putting the action in slow motion.

Roberts fixed the GoPro 2 to the back of his car and pulled Kerby along on a skateboard. To sync Kerby’s lips to the slow-motion video without slowing down the song, “Limelight,” Kerby had to sing four times the song’s normal speed. “We had to have a slow song,” Roberts explained. “If you took any regular song, it’s just too fast. You couldn’t even try to sing it. That’s the challenge of this video. It took him a week and a half to practice this, even though it’s a really slow song, to really get that down.” Using special effects software, Roberts further slowed some of the skateboard tricks (performed by a stunt double) to give the illusion of 1,000 frames per second.

During the past year, Roberts has released a variety of films to his YouTube channel, “ocdeuce22,” under the banner of his company, Reckless Abandonment Productions. Many have been shot with handheld devices and some have delved into stop animation. Combined, they’ve gotten more than a million views.

Last spring, Roberts made a music video for “Sarsaparilla Girl” for local band Dr. Pants. Roberts shot it entirely on an iPhone 4. After that, Nokia contacted him to shoot a short film with their smartphone, the Nokia N8, for a competition. Roberts’ entry was a video for local musician Denver Duncan’s “Stalker.” “It didn’t win the contest, but it was the second-most ‘liked’ in all the hundreds of people who entered,” he says. “That got more buzz than any of my other videos.”

Special effects trickery is Roberts’ playground, which is clear in videos like “Dum Dum Dah Dah” for the Nghiems, which features humans and dolls filmed in stop-motion, spliced together and fighting each other to music. “The day after it posted it was the 17th most ‘favorited’ video on YouTube in the world,” Roberts says. The production, which features the band members’ heads superimposed onto 1/6-scale Bruce Lee and Michael Jackson dolls, depicts the musical trio in an old-school, arcade-style fighting game, where they all have powers related to their musical instruments. “It’s kind of like Mario — save the princess, save the world,” he explains. “The special effects and stuff took the longest part (We had to) basically create a video game from action figures.” After the video for The Nghiems hit YouTube, more than 20 bands from all over the country contacted him in hopes that he would make videos for them as well.

Roberts’ other forays into stop-motion are “Wall-E Meets Michael Jackson,” “Iron Man vs. Batman,” and “Battle of the Bonds.” “Iron Man vs. Batman” showcases a brawl between two of the world’s most famous crime-fighters set before an Oklahoma City backdrop. The film is interactive, like a “Choose Your Own Adventure” book, and allows the viewer to decide who wins. To date, the video has had more than 260,000 views on YouTube and has been featured in the L.A. Times and Wired Magazine. “That’s the first one that really took off,” said Roberts.

“Battle of the Bonds” is a six-minute James Bond parody featuring six cinematic 007s, from Sean Connery to Daniel Craig, animated with more than 5,000 individual photos. The short film, which took eight months to create, stars Sideshow Collectibles, the same brand of $200, 1/6-scale dolls featured in the “Dum Dum Dah Dah” video. They are bigger than normal action figures, and are highly detailed and posable. Unfortunately, there was no Daniel Craig “Bond” in the inventory, so Roberts had to have one custom made in Singapore. The bill for these films can be high, so Roberts gets sponsorships so he can focus all his attention on the creative aspect.

For “Battle of the Bonds,” he enlisted voice talent from across the untamed reaches of YouTube and superimposed the actors’ mouths onto the dolls. Roberts says the process is easier than animating the mouths, but it adds the difficult task of matching real human lips to arguing, plastic people. “It’s really tough,” he says. On location, Roberts normally has a crew of three or four people, many of whom have done a lot of independent movies. “I don’t think (people) understand quite how much work goes into stop-motion, but I think they understand that it takes a long time.”

Roberts takes inspiration from other stop-motion films, especially “Fantastic Mr. Fox,” because it tells a good story in addition to the beautiful visuals. “I really do watch as much as possible. One, to get ideas and get inspiration and just respect what other people are doing, and just to know what else is out there,” he says.

Roberts started teaching himself stop-motion while his wife, Sarah, took grad school classes at night. “I just started playing with toys and somehow made a career out of it,” he says. Although deadlines can be stressful and his projects are time-consuming, he and Sarah, make time to go on dates. “It’s very stressful, but we find a way to make it work,” Roberts says. “She says I play with toys, or she calls them dolls, but they’re not. They’re
action figures.”

“It’s rewarding. At the beginning of it, I just did it because I wanted to learn it,” he says. “I wanted to tell a story with action figures … to see if I could pull it off. After it got a lot of response, I thought to myself, ‘Maybe this is something I could actually do.’” Roberts also credits faith for his success. “My faith is a big part of my life and work,” Roberts explains. “Even though not everything is ‘Christian’ I always try to keep it fairly clean and my production company name, Reckless Abandonment, stands for leaving your old life (for) your new life
with Christ.”

Roberts made his first video in college in 2007, but his video career didn’t take off until a year-and-a-half ago. However, he started down this career in high school when a broken foot directed him away from basketball and into broadcasting. “I’m glad I did because it’s kind of picking up now. I doubt I would have gotten very far in basketball. I’m 5’10.” ” His school in Columbia, Missouri had a strong broadcasting program and Roberts was involved in a weekly news program with other students. That led him to make music videos and his teacher gave him a key to the broadcast office so he could edit on weekends.

A scholarship to Oklahoma Christian University brought him to Edmond and he stayed. As a video intern at church camps, one in Colorado and one in California, he had to make videos every day which taught him to work quickly. He was offered a two-year internship shooting music videos in L.A. for Redband Pictures but it was two years with no pay and 80 hours a week. Roberts says he was close to taking the offer, but instead took a job at NewsOK.com, producing a biweekly show called “Static.”

Roberts says when he graduated, people told him he needed to go to L.A. to make it. “It was true then, but it’s not the case now,” he explained. Roberts wants to prove that he can become a successful filmmaker here in Oklahoma. To all the hope-to-be Wes Andersons and Tim Burtons out there, Roberts says, “Just go do it. Whether you have an iPhone or a Flip camera, or whatever — you’ve just got to get out there and do it.”

To see Roberts’ work, visit ra-pictures.com or check out his YouTube channel, ocdeuce22. His filmmaker-themed T-shirt line can be found at recklesspictures.spreadshirt.com.