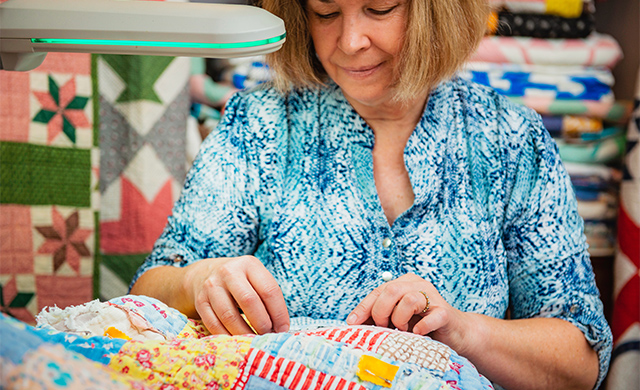 The value of a family’s hand-pieced quilt is measured by memory. Martha Sparks specializes in helping people restore these important heirlooms so that the story can carry on for future generations. With a thirty-year background in the museum field, Martha’s work goes much deeper than that of a skilled seamstress—she does detailed textile restoration in her home studio.

“Right now, I’m working on a quilt made of various feed sack patches from the 1920s,” Martha said. “Two of the fabrics have become so fragile that they’re almost non-existent, so I’m restoring those patches with pieces from my stash of original period fabrics.”

Martha spent six months on a 1950s butterfly-block quilt in which a family member had cut up the bottom two-thirds to make teddy bears. Luckily, another family member rescued remnants of the original fabric, so Martha is reattaching the missing portion.

Martha’s goal is to make the quilts look whole again, in a way that no one can detect her work from the creator’s work. It’s a technique revealed to her in the basement of a museum. “An elderly gentleman, working amidst shelves of liquids and tools, had a small-scale sailboat made of rosewood with mother-of-pearl inlay. He said to me, ‘See if you can find the areas I restored.’ I looked closely and never found any. That was the moment I knew I wanted to be that invisible individual who restored objects.”

Her tools of invisibility include small needles, scissors, and a variety of surgical instruments. “Quilt restoration is a lot like doing surgery, except on fabric instead of flesh. It’s precise, microscopic work that can involve snipping one tiny thread. It harkens me back to my early days at a natural history museum when I was helping mount mollusk radula (a structure like a tongue) onto specimen slides.”

After working in museums around the country, from natural history museums to the Rocky Mountain Quilt Museum, Martha is very aware of the power of a single object, big or small. “When you spend years working intimately with objects, you can’t help but be drawn to them. I enjoy knowing these things are tied to a past era.”

Few quilt projects have affected Martha as much as a four-patch polyester quilt from the 1970s owned by a man in hospice care. “It wasn’t a valuable quilt, but it was special to him. His mom had made it from family clothing scraps. His request was that the quilt be laid on him in his casket at his funeral.”

Martha still becomes emotional as she remembers working long hours to restore the quilt in time. “The outer edges were stained and frayed from use. I had to rush at the end, because he passed away sooner than expected. I later received a picture of the family members holding the quilt at his service. I have so much satisfaction at having worked on the material object that sent him into the next world,” Martha said. “It’s rewarding to help folks save their family textile heirlooms, and I plan to continue as long as I possibly can.” 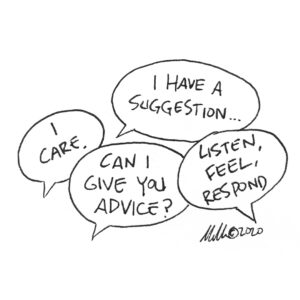 September 2020, In Other Words with Dave

In Other Words with Dave – September 2020

by Dave Miller
It’s a rare case when the words I speak have an impact on someone’s life – at least that’s how it feels. When I replay important conversations I’ve had in the past, I think I should have used bigger words, more empathy or perhaps some research or fact-finding would have supported my point of view. ...
Read More  > 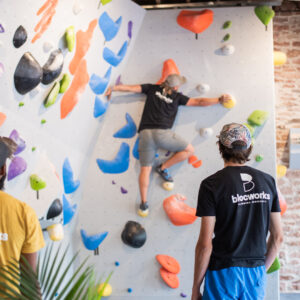