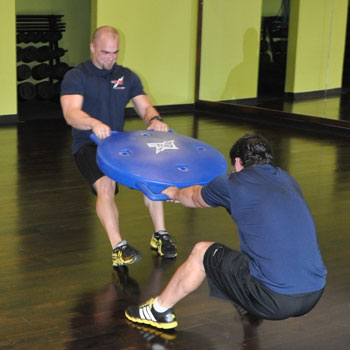 College and professional sports programs across the nation have found a new way to build strong, unstoppable players, and the key is an invention by Edmond resident and former football star
Steve Zabel.

“The Tug” is filled with water and it uses inertia to offer a new spin on the millennia-old game tug-of-war. Disc-shaped and fixed with four handles, it boasts an innovative design for increased safety and added features to create a workout reminiscent of dangerous strength-training exercises of the past.

The idea came from Zabel’s football days at the University of Oklahoma. In the off-season after his sophomore year, his team conditioned with “stick wrestling,” a battle of brute strength where participants wrestled over a 24-inch segment of a broom handle. The exercise proved to be a very bloody fiasco, with his teammates getting gouged and hit with the stick, butting heads and catching elbows.

Thirty years later, after a decade of NFL play for the Philadelphia Eagles, New England Patriots and Denver Broncos, Zabel started coaching at Curry College in Milton, Massachusetts. There he met a young coach who suggested having the team play tug-of-war using tires. Instead of running sprints after practice, the team had six tires for the exercise. “This is what stick-wrestling was like, except nobody got hurt,” Zabel explained. However, someone did get hurt at Harvard when a defensive coordinator decided to increase the weight by upgrading to tractor tires. As a result, an athlete broke a femur. This caused Zabel to realize his still-primitive idea for The Tug would have to factor in weight variation and safety.

In the off-season, Zabel applied for a patent and developed a prototype for his invention. It was 18 months before he got a response from the patent office in 2004. After that, he found a manufacturer in Gainesville, Texas, and The Tug went into production. “It’s been a fun ride so far,” Zabel says.

He started going to football conventions and high school and college football clinics across the country to promote The Tug. One of his former Philadelphia teammates, who was coaching at Baylor University at the time, bought six. Less than a week later, The University of Texas bought 12. Soon, OU, Oklahoma State, Tennessee, Michigan, Wisconsin, Minnesota and many other Division I schools were placing orders and integrating The Tug into their athletic programs. “It’s kind of taken on a life of its own,” Zabel says.

High-profile appearances in an article about Syracuse in ESPN The Magazine and on a Thanksgiving Day football game gave The Tug a big kick in sales. Now, professional sports teams including the Dallas Cowboys, Tennessee Titans and St. Louis Rams are using The Tug and Zabel has shipped several thousand units. It’s also used in training for hockey, wrestling, lacrosse, football, women’s soccer and other applications.

What’s unique about The Tug is that it can hold about 15 gallons of water, which makes it 80 pounds when half full. While being fought over, the water sloshes around, creating inertia. So, when two people are playing tug-of-war with the device, it’s like there are three, the third being the inertia created by the battle. “You’re not just going against your opponent,” says Zabel. “You’re going against that third guy,
The Tug.”

Users have found solo ways to implement The Tug as well, in exercises including lunges, duck walks and squats. The fact that the water is always moving turns routine exercises into unique, core-engaging workouts because it’s like trying to balance an 80-pound level, Zabel explains.

“The Tug has fit a pretty good niche in that world,” he says. The handles are 36 inches apart, which makes using The Tug safer than old-school stick-wrestling. It’s made of bendable resin, which is softer and more forgiving than plastic. Its weight also serves as a safety feature. When full, The Tug weighs about 150 pounds, which makes it harder to throw around and hurt someone. “The heavier it is, the safer it is,” Zabel says.

While The Tug is marketed mostly to athletic programs, Zabel is working on a smaller, more versatile version called “The Tugger” that will be intended for the public. Zabel says he hopes that one day every elementary school in America will have a Tugger. Another product that’s now available from his company, Competitive Action Sports, is the “Water Slog.” It is designed for more traditional weight lifting and holds 16 gallons of water.

Zabel continues to travel the country promoting and selling his products. “It’s been something that I’ve enjoyed. It allows me to stay in the world of athletics,” he says. Not only is he still part of that world, he’s helping shape the way athletes of the future will train.