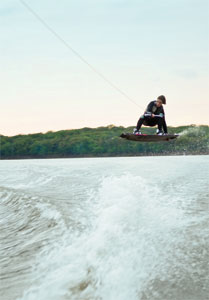 Wakeboarding is a beast of wild origins — a hybrid of waterskiing, snowboarding and surfing bred in crystal blue waters off the coast of Australia in the ’80s. The extreme sport features dizzying spins and gravity-defying stunts at thrilling heights while the rider is pulled across the water by a speedboat, and it’s more than just a weekend obsession for local athletes Taylor Kress, Rachel Orgill and Dylan Branch.

Kress, an Edmond native who won the WWA Wakeboard World Championships in his division last year in Indianapolis, has long been a thrill-seeker. “I motocross; I’ve always snowboarded. Pretty much any extreme sport, really, I’ve done it at one time,” he says. But he loves wakeboarding most. Being on the water and the satisfying feeling of smoothly executing a trick are what keeps Kress coming back every season.

He learned to wakeboard when he was 6 years old, but didn’t like it at first. As a child, waterskiing was an institution in his family and wakeboarding came with it. It wasn’t until he was 11 that he returned to the sport, drawn in by the amazing tricks he was seeing on TV. “From then on, [I] just watched videos nonstop and wanted to do it,” he remembers.

Nine years later, Kress is studying business at UCO and moving to the professional level in wakeboarding following his win at Worlds last August. A couple weeks before that, he also won the WWA National Championships in his division. “I thought I got beat,” he admits of Worlds, “but when the scores came out I ended up winning.” He says it was a relief to win after trying for years. Now, Kress wants to win Worlds in the professional bracket.

In wakeboarding, divisions are based on skill level and age, explains Branch, a 16-year-old wakeboarder from Guthrie. Usually, wakeboarders will compete in heats of about five people. They ride two times, and the judges take each rider’s best score. The top two from each heat progress to the finals, where they ride two more times and then first-, second-, and third-place winners are selected. For pro riders, there’s a cash payout; for the rest, trophies and other prizes.

Kress isn’t the only Edmond-grown world champion whose first exposure to wakeboarding came at age 6. Orgill, now 15, rode for the first time on a houseboat trip in Virginia and has kept up with it ever since. When she was 9 years old, she started learning some tricks and then decided to try to upstage her dad, who posed some competition. “I wanted to compete with him and get better than him, and then I did.”

The Edmond North sophomore estimates that, while riding, she can fly six to 10 feet into the air. To get airborne, a wakeboarder cuts in toward the speedboat’s wake with the edge of the board. “Whenever you edge through the wake, it pops you up,” Orgill explains. “It’s a really cool feeling. I just love going out and doing it,” she relates. “It’s such a unique sport.” Orgill says she loves the time wakeboarding allows her to spend on the water with friends and family.

She tries to make it out to Arcadia Lake two or three times a week during the school year, and during the summer she goes five times a week. “As soon as it doesn’t freeze overnight, that’s when our season starts,” she says. “It’s always terrible, just waiting for spring to come.”

Orgill also competes regularly. “I was really excited,” Orgill says of placing first at the World Championships last year. “It was like all my hard work paid off.” She’s been competing at Worlds for three years, and last year she also placed fourth at Nationals in the junior women (ages 14-18) division. She placed third in the world two years ago, and then she won second in Worlds last year.

For years, she’s been participating in the Wake Games, held in April in Florida. It’s the first significant event of the season. However, last year, she broke her femur in a back flip while training the night before the competition. “At first, I thought I was just going to be able to walk it off, but obviously I couldn’t. It was disappointing, but it was OK,” she says.

To prepare for the Wake Games, Branch recently spent a month in Florida to train. He’s been riding for a few years, and he was first introduced to the sport by his dad. “He got me a board and took me out and he’s pretty much my inspiration to do it. I love it,” Branch says. His dad, Greg Branch, rides with him often. “He’s actually still really good.”

Last year at Worlds, Branch placed third in the junior men’s division, and his season is already filling up with competitions. He’s out on the water for one to three hours every day, and he’s able to get 10 to 15 feet in the air. He’s homeschooled by his dad, with whom he spends two to five hours per day in academic instruction.

Branch often trains with Kress, who has taught him a lot. They and Orgill ride at Wake Zone Cable Wakeboard Park in Oklahoma City, where speedboats aren’t necessary thanks to cables that pull wakeboarders across the water. “It’s a good place to learn, good atmosphere, it’s just really fun,” Branch says.

“I love being on the water. It kind of gets my mind off everything. It’s a sport I love. I really don’t do any other sports. It’s just fun, [I] get to hang out with friends, and it’s a progressive sport,” Branch says.

To test the water for yourself, or to learn where you can be a spectator to the action, visit the World Wakeboard Association online at www.thewwa.com.