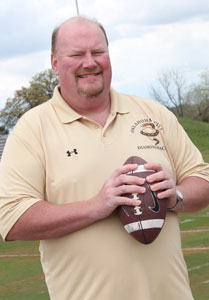 Veteran college football coach Brian Kelly has set his sights on the Oklahoma City Diamondbacks, a semi-professional football team with a promising future and several Edmond players on the roster.

The season kicked off March 3, with early wins perhaps setting a template for a successful 2012 for the team. “We kind of have an idea we’re going to be pretty solid this year,” Kelly predicts. The season ends May 30. “No conflict with NFL or college football for fans, but it gives them a chance to see some ball between now and then,” he says. “We’re a high-scoring offense; it’s a lot of fun for the fans.”

This is his second season with the Diamondbacks and first as head coach. Last year, he served as defensive coordinator and this year has taken on both duties.

Kelly was defensive coordinator for arena football teams Kansas City Brigade and Las Vegas Gladiators (now the Cleveland Gladiators), for years. Before that, over the course of nearly two decades, he was on the coaching staff at Eastern Illinois University, Oklahoma Panhandle State University, Mars Hill College, University of Memphis, University of Maryland, Sam Houston State University and Southeast Missouri State University. He was at Eastern Illinois during Tony Romo’s tenure. “Good guy. All the guys on the team loved him.…He’s definitely one of the elite quarterbacks in the league,” Kelly says of Romo. “I’m not particularly a Dallas Cowboys fan, but I am a Tony Romo fan, so I can’t help but cheer for him.”

Of his time with the Gladiators, Kelly remembers, “That was a great experience. Vegas is what
Vegas is — it’s a show town, so arena football is just another show.” Attendance at those games sometimes reached 8,000 and they played in a venue nearly the size of the Chesapeake Energy Arena.

Originally from Moore, Kelly came back to Oklahoma in 1996 when, while coaching in North Carolina, he got a phone call and learned his dad had cancer. He was told to come home and make funeral arrangements. Now, his dad is still alive, 83 years old, and cancer free.

Kelly was head coach at Edmond Santa Fe High School from 1997 to 2001 and during that time 24 of his boys signed to D-1 schools. About 50 went to D-2 and 1-AA schools. He partly credits this to his contacts in the world of college sports. He knew coaches all over the country and he used those connections to get the schools to look at the players.

In those days, coaches had to suffer through the cumbersome process of sending tapes of each player’s football highlights to universities, then call three days later to ask if they received it, then call in another three days to ask if they watched it. Now, players can post highlight clips on YouTube to pique colleges’ interest. Still, even with changes to the recruitment process, Kelly says it’s important for hopeful players to attend football camps. He played for OSU during the Jimmy Johnson era, and he owes it to attending a football camp. “By the end of three days, I had a scholarship offer up there. Camps can be important for kids and I don’t think people need to discount that.”

Of his Santa Fe players, Brandon Whitaker played at Baylor University and led the Canadian Football League in rushing this year. “I think the CFL is going to have a hard time keeping their hands on him,” Kelly predicts. Another player went to Sam Houston State then started coaching at Baylor, and that’s how Kelly got Whitaker there. “We knew when he was a sophomore that he was outstanding.”

“It was a good place to coach and a good school,” Kelly says of Santa Fe. “A lot of talent.” His current league is also impressive. “Our league is only getting better and stronger,” Kelly says of the Oklahoma Metro Football League, which includes the Diamondbacks. “It’s pretty rock ’em, sock ’em ball.”

In February, the OMFL reorganized to merge with the Central Football League. The leagues have blended their schedules and, at the end of the season, OMFL and CFL teams will butt heads for the championship. The Diamondbacks play against teams from across the state, as well as Arkansas, Missouri
and Kansas.

“We’re kind of a gateway league for some players,” Kelly explains. Lionel Bibbins, who played for the Diamondbacks last year, has signed a contract with the Utah Blaze. Kelly says NFL teams and Canadian teams have been after Bibbins. “He’s an excellent player. We were happy for him to get the opportunity; of course, we hated to see him go because he’s so good. We probably have, I guess, five or six guys that if that’s what they want to do, they will have the opportunity to do that.”

“It’s more than just weekend warrior football,” Kelly affirms. He says a large percentage of the team members played four-year college football and have a great understanding of the game. “We have guys from Louisiana, Texas, St. Louis, Chicago, as well as our Oklahoma guys.” Kendrick Powell and David Hunt, originally from Flint, Mich., are Edmond transplants. “They’re good additions to the community,” Kelly says. New to the Diamondbacks, TJ Shaw played for Edmond Santa Fe and UCO. “I think he’s going to be an excellent addition for us,” Kelly says. Quarterback Brandon Noohi and wide receiver Ryan Gallimore also are former Bronchos. “Those guys hold a lot of records over at UCO for passing and receiving,” said Kelly. “We’ve got about seven receivers who are just outstanding players, but Gallimore, he’s something else.”

Gerald Jones played for the University of Tennessee and made it to the final cut with the Philadelphia Eagles last year. Kelly is pretty sure someone will snatch him up this year.

The team practices and plays its home games at Millwood High School, the host location for all Oklahoma Metro Football League teams on this side of the state. “We love playing at Millwood; it’s very convenient, right off the highway, there’s great parking, and it’s a great place to see a ballgame,” Kelly says. “We really enjoy it; it’s a great venue.”