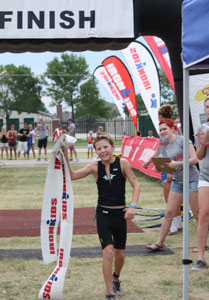 Training and competing in one sport takes dedication, commitment and perseverance. Training for three sports simultaneously? That takes three times the effort, but brings three times the reward, as one Edmond family discovers. They have two children competing in youth triathlons as part of the Oklahoma City-based H-I-S Racing team.

10-year-old Chloe, a Charles Haskell Elementary fifth-grader, and 12-year-old Mason, a seventh-grader at Summit Middle School, were introduced to triathlons in 2009, when the family cheered on a family friend who was a triathlete.

“(After watching him), we saw there was an IronKids (competition) in Oklahoma City a few months later, so we thought, ‘what the heck,’” Beth said. “Both kids were good runners, were fairly good swimmers, and had been active in sports since they were little bitty, so it wasn’t really a stretch.” The two children had no training, no fancy equipment or bikes; they just showed up, she said. “I think we even had to scrounge up a helmet from a neighbor.”

As a junior competitor, Chloe swam 75 yards, rode two miles on her bike and then ran a half-mile, earning sixth place. Mason took seventh place in the intermediate category, swimming 150 yards, riding four miles and running a mile. They both loved the experience, and Chloe decided to continue training for the 2010 season. Mason didn’t commit to the sport until the following year.

Although Chloe prefers individual sports, she likes to be part of a team, so to train, she joined the newly-formed H-I-S Racing team, sponsored by H-I-S Paint Manufacturing Company and coached by 19-year-old Talbot Cox. Cox understands triathlon fever. As a seven-year-old, he watched his dad compete in his first triathlon. He then raced in his first event three months later, and has never looked back.

Cox became a more serious competitor when he was 10, competing in the national championships in Colorado Springs, Colo., almost making the top 10. At age 14, he raced his first Half Ironman — a 1.2-mile swim, 56-mile bike ride and 13-mile run — and finished in less than six hours. Just last year, Cox became “draft legal” which allowed him to compete in the top level of the USA Triathlon junior competition: Junior Elite Cups. Drafting is a cycling technique which, once conquered, allows riders to ride in tightly-grouped packs to take advantage of the aerodynamics. Non-draft riders might average 18 miles per hour, while draft riders will average 27, Cox said.

After taking off most of 2010, he traveled to West Des Moines, Iowa, to compete in a national competition, and was astounded at the advancements made by other competitors from across the nation. The difference? Team training. The athletes that were members of one of the nine triathlon teams in the nation were consistently higher achievers.

Cox approached his dad, Tony Cox, triathlete and owner of H-I-S Paint, with the idea of starting a racing team, and H-I-S Racing was born. The first practice was in mid-June, and involved only Tony, Talbot and Talbot’s two younger sisters. By national competition in September, H-I-S Racing had 23 team members ranging from age 7 to 19. Chloe Case was one of them.

The team practices roughly two hours a day, six days a week April through September, but many of the kids like the Cases train the different aspects year-round: riding bikes on indoor trainers, running on treadmills and swimming indoors in the cold months. Cox also teaches them nutrition and the mental strategies, transitions and tactics to shorten their times and improve their performance.

In 2010, Chloe placed 24th at the National IronKids triathlon in St. Petersburg, Fla. The experience showed her that she could compete against athletes that had been competing longer, had better equipment and were more fine-tuned, Beth said. “It gave her something to shoot for.”

Last season, she won first place at seven different triathlons and was named Top Overall Female for the South Midwest USAT championship series. She also increased her ranking to ninth place at the IronKids Nationals.

Her brother Mason competed in 2011, as well, and even with his year off, he won two different events and placed in the top five in every triathlon in which he competed. In his first IronKids Nationals competition, he placed 22nd.

Coach Talbot had a successful year as well, and has fully committed to achieving his dream of qualifying for the Junior Olympics. He graduated high school early last December and trains daily, working toward winning the 2012 Dallas ITU (International Triathlon Union) Triathlon Pan American Cup, which would qualify him for the World Championships in New Zealand.

“When you train with others, you bring out the best in each other,” he said. “Someone is always there to push you to excellence.”

“Triathlons are touted as an extension of play for kids,” Beth said. “Kids naturally ride bikes, swim in the summer and run around playing. If you are going to play, why not do it with friends?”