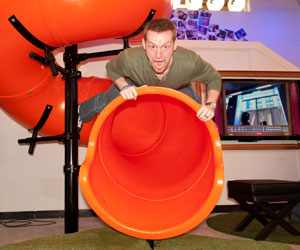 Lots of people wish they could watch baseball for a living, but no one expects to actually get to do it, except for Edmond man Kyle Thompson and a few lucky “cave-dwellers” whose job is to watch all 2,430 Major League Baseball games this season.

Squirreled away in the MLB Fan Cave in Manhattan’s Greenwich Village, with a wall of TV screens and a bevy of celebrity couch-mates, life since March has consisted primarily of one thing: baseball. So far, they’ve watched more than 1,700 games, sometimes as many as 14 simultaneously. It’s partly to prove they can do it, but it’s more to let people all over the world get a taste of every fan’s dream job. “We’re literally in baseball heaven,” Thompson beams. “As a baseball fan, there is no better experience other than if you were to actually go watch all of the games, and that would be impossible.”

About six months ago, almost immediately
after earning an MBA from the University of Central Oklahoma, Thompson and his wife, Kelsi, temporarily said goodbye to Edmond and their home state and reported to New York City. No one actually lives in the Cave — Thompson and his wife have an apartment close by — but he has spent nearly every waking hour in the Cave since he arrived, and he never gets a day off. “I don’t leave until the West Coast games are over, which is one or two in the morning, most nights,” he says.

Thompson admits it wears on him when he can’t spend every evening with his wife, his dog and his friends. He wouldn’t still be in New York without Kelsi’s support. As for their new city, “She loves it,” he reports, although he admits, “We’re not living real life right now; we’re living in New York City and someone’s paying me to watch baseball.”

He and eight others were picked from 22,000 applicants who submitted two essays and a video. The cave-dwellers relay their experiences to the outside world through social media and TV. They blog, tweet and post, upload videos to YouTube and host concerts and special guests. “There’s a different challenge that comes up every day, so it’s definitely not a stagnant environment,” Thompson assures.

He keeps a running list of every celebrity, team and band he’s met since he arrived in New York, and that list now has more than 200 names on it. Thompson has played drums while actor Craig Robinson (“The Office”) played keyboard. He’s performed a magic trick for Penn Jillete (of Penn & Teller). He’s hung out with Derek Jeter and met Charlie Sheen. “He was one of the most cordial and polite visitors that we’ve had,” Thompson says of Sheen. “He knows everything about the game of baseball.”

Thompson even has his own baseball card, created by Topps. On it, he’s swinging a bat while wearing the jersey of his beloved Cardinals. “I was like a little kid the whole time,” Thompson says of the experience. The cave-dwellers were treated like baseball players and got to sit down with their own personal designer who put the cards together right in front of them.

“As a kid, I played all the time,” he said, and from an early age he’s been a Cardinals fan. “I wasn’t the type of fan who would exclusively watch one team,” he said. It didn’t matter who was playing, he would be watching baseball. “It’s interesting to look back and say, ‘Wow, I started doing this back then, and sort of have been my entire life.’”

Life in the Cave is a dream, but eliminations come at unexpected times with little warning. When they learn that someone will soon be sent home, “it hangs above you like a big, mean cloud,” Thompson said. The original nine have been whittled to four. Who gets cut is based on fan voting, social-media following, Facebook likes and how the cave-dwellers communicate with their followers and handle themselves in general. “There’s a lot of things that go into it,” he explains.

Thompson predicts, “There will be more people sent home. They say there is one overall winner of this thing.” Attending the World Series in October is the final stage of their adventure.

Thompson tries to be a good ambassador for Oklahoma. “[It] makes me feel like I’m accomplishing the goals I set out to do, and that’s to represent the Cardinals well, to represent my state well and represent my God well. And I feel like if I fail in any of those areas, it wasn’t worth being here.”

Those who want to help Thompson stay in the Fan Cave can vote for him an unlimited number of times on www.mlb.com/fancave or follow him on Twitter @KyleOKC. 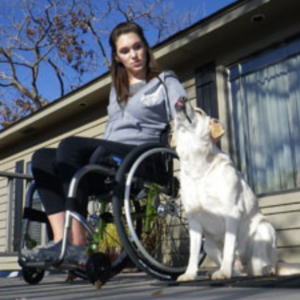 by Heide Brandes
On a bright sunny August day in 2010, Davis glanced down for a second while driving her truck from OSU to her parents' house north of Edmond. That glance made her truck shift...
Read More  > 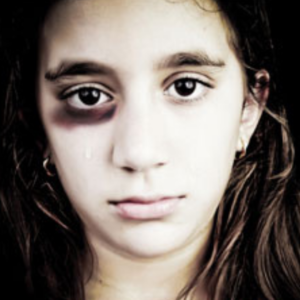 by Stephanie Rasch
The 2011 brutal murder and dismemberment of 19-year-old Carina Saunders from Mustang has thrown Oklahoma and human trafficking into the national spotlight, where many Edmond residents least expected to see it "��� close to home.
Read More  >