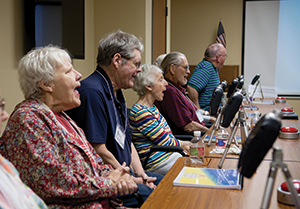 They sit around a u-shaped conference table, this group of individuals from all walks of life. Before them sits a spiral-bound workbook, bottles of water and what looks like a sort of microphone on a tripod. There are big red buttons on each table that read “speak louder.” The group is cheerful and engaged—men and women, joking good-naturedly with one another as they all settle in. Standing in the middle of the room is Christina Santos, who subtly goes around the table, checking in with all the participants.

“Set your decibel meters at 90 and remember to put them an arm’s length away from you,” she reminds them as she readies a display at the front of the room. When everyone is ready, they start on the first exercise. “May! Me! My! Moe! Moo!” And that’s when you realize that “Loud Crowd” is the right name for this bunch.

Parkinson’s disease is a neuromuscular disorder that is brought on by a loss of dopamine production in the brain. This loss causes movements to become small, which may lead to muscular atrophy that can impact walking, facial expressions, small motor skills, swallowing and speech. Parkinson’s disease is the second most common neurodegenerative disease after Alzheimer’s, affecting more than one million people in the United States. The goal of the Parkinson Foundation of Oklahoma is to “improve the quality of life for Parkinson’s patients and families, create awareness in each community, educate healthcare providers about PD, and support research efforts.”

“Most people don’t realize that their voice is changing,” says Santos, a speech pathologist who leads the program. “Their breathing becomes shallower and their voices become softer.” When Santos works with people with Parkinson’s, she records them talking before and after therapy. This helps illustrate how the disease has impacted their voices and how speech therapy can improve their communication. Most are surprised to find their voices aren’t as loud as they thought. 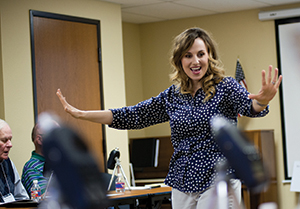 Jim Keating founded the Parkinson Foundation of Oklahoma eleven years ago when he realized there was no such group existing. He first heard about the Speak Out! program a few years ago, through a colleague who saw a news story about Speak Out! in Dallas. Keating contacted the group about bringing the program to Oklahoma after seeing the positive impact it had on people with Parkinson’s. “There are many things that get worse with Parkinson’s,” says Keating. “When we can strengthen people, it’s powerful.”

The Loud Crowd works through a series of vocal exercises, including vocal glides (holding a note at a low tone and gliding up the scale while maintaining vocal strength) and reading passages aloud. The book, HOPE: Four Keys to a Better Quality of Life for Parkinson’s People by Hal Newsom is the reading this day. A passage about initial diagnosis sparks a discussion on how each group participant felt when they found out their own diagnosis. They were relieved. They were scared. They were in denial or joyful acceptance because there was finally an answer to what was wrong.

They discuss issues impacting daily life—how medication affects their moods, issues with eating when their hands are experiencing tremors. All the while, Santos gently guides them to “speak with intent” and “speak louder” when voices became soft. More than individual speech therapy, the Loud Crowd group offers people diagnosed with Parkinson’s a safe place to share their triumphs and challenges.

The best measure of a therapeutic program is its success rate—and the Speak Out! program enjoys a wonderful record of not just delaying Parkinson’s-related speech issues but reversing them. Santos says that the Speak Out! Program is “more than just slowing down the progression of the disease, it’s about turning it around and becoming stronger.” 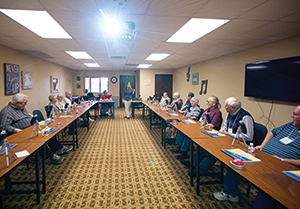 One of the initial local group members was a choir director in his 50s with Parkinson’s disease. His voice had become so quiet that he needed a microphone to be heard speaking, and even then, listeners struggled to hear him. After just four weeks of vocal work, he was able to speak at a clear volume again. Another gentleman was unable to continue a job that included providing expert opinion on television because his speech had degraded, but after therapy he was able to regain his voice—and his career.

The conference table is crowded when it’s time for the Loud Crowd choir practice. Accompanied by a piano and acoustic guitar—played by foundation executive director Jim Keating—Santos leads the men and women around the table in warming up their voices and singing songs that include traditional classics (“Let Me Call You Sweetheart”), Elvis Presley songs (“All Shook Up”) and modern pop songs (like Pharrell Williams’ “Happy”).

The music is healing and connecting for the group. When they struggle with a particular melody or phrasing, Santos has them practice that part independently. This choir sounds amazing, and has a string of public appearances to their credit with more in the works. The only giveaway that this isn’t any other typical choir practice is the reminder from Santos to “sing with intent” when voices get soft. As with the Loud Crowd group, this is a group of people who are cheerful and engaged, working together to overcome. 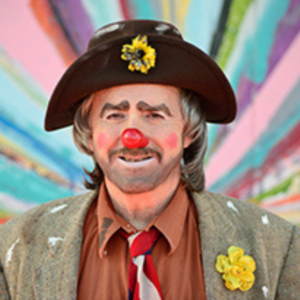 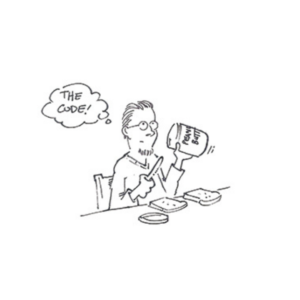