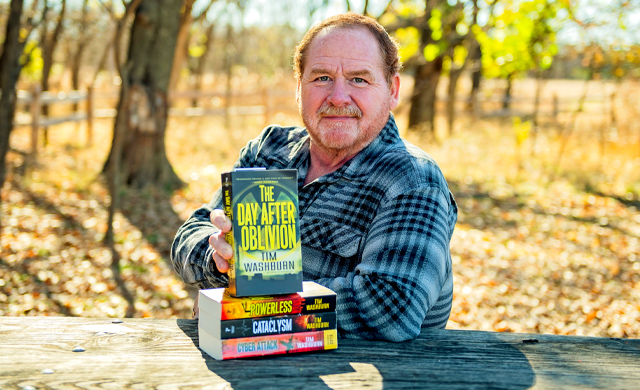 Edmond resident Timothy Washburn spends his days planning sophisticated cyber attacks and unleashing monstrous volcanic eruptions, a career path he never anticipated. “I didn’t want to destroy the world over and over,” Washburn said. These doomsday scenarios unfold in Washburn’s thriller novels, which focus on events such as catastrophic solar storms or hackers taking down government computer networks. All of his scenarios start with a kernel of truth, he said.

“Everything I write is possible, maybe not probable, but certainly possible,” he said. Originally from Tecumseh, Washburn attended the University of Oklahoma and later worked in broadcast journalism and as a freelancer before pursuing a
career as a novelist. Getting published took time and perseverance, and he wrote four novels in other genres before writing a disaster thriller that landed him a publishing deal.

“If I’d known how difficult it was going to be, I’m not sure I would have pursued it,” Washburn said. “Now that I’m here, though, I can’t see ever doing anything else.”

Washburn spends between three and four months researching each book, focusing on details ranging from the effects of radiation sickness to how jets work and often generating a stack of papers a foot high. Immersing himself in apocalyptic themes has prompted him to think about what he’d do in a similar situation, but despite his in-depth knowledge of the subject, he says he’ll probably be in the same situation as everyone else.”I mean what do you do, you can stock up on cases of water or buy some freeze dried food, but realistically, how prepared can you be?” he said.

Washburn’s fourth thriller, “Cyber Attack,” published in late November. It focuses on a series of cyber attacks that destroy everything from power grids to chemical plants and threaten the entire United States. His other novels include “Powerless,” in which a solar storm takes down the power grid across the Northern Hemisphere, “Cataclysm” which focuses on the eruption of a supervolcano and the massive earthquakes that follow, and “The Day After Oblivion,” which follows what happens when the NSA’s computer networks are hacked, leading to nuclear strikes, millions of deaths and a handful of survivors struggling to rebuild civilization.

Washburn just signed a three-book deal for a historical Western series that follows a family based in Texas. With the first book set in 1873, he shifted his research to historical details such as the history of guns, newspapers and telegraphs. Washburn grew up reading Westerns but never imagined he’d write in the genre, in part because the genre’s popularity waned for a while. However, he sees it making a comeback.”I think people are looking for escapism from the reality of what’s happening,” Washburn said. “If you’re writing a fiction book about what’s going on in Washington, people would say that would never happen. You just can’t compete with what you see on the news every day.”

When asked what advice he can offer aspiring writers, Washburn suggests to keep writing, even though 90 percent of submissions don’t even get a response. “A lot of people make the mistake of writing one book and trying to get it published. You’re better off to just keep writing,” he said. 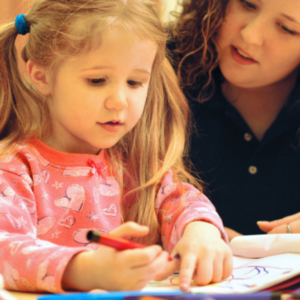 by Maria Veres
Childcare that educates and nurtures
Read More  > 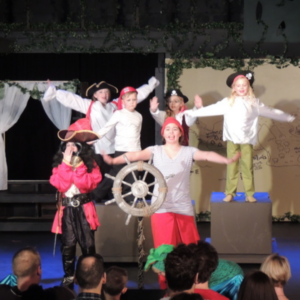