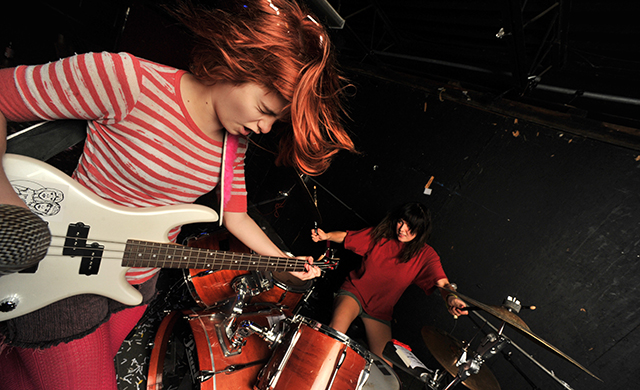 The girls look like little pixie
fairies—just so tiny and young and full of the energy that butterflies and
hummingbirds seem to have. It’s hard to visualize these two teenage girls—one
18 and the other 13—as the new powerhouses in punk/pop music. These young
musicians thrash about on stages in California, Austin, Chicago and Oklahoma
City with guitars, drums and a huge fan following that’s only growing.

However, within a few minutes of
conversation, it becomes clear that Kelli Mayo and Peyton Bighorse are anything
but typical. Kelli, the younger of the two, is a fireball of restless energy.
Under a floppish mess of blonde hair and through braces, she speaks about
musical influences and how the music changes through her. Peyton, who just
graduated high school, is a little quieter, but her eyes light up when she
talks about sharing the stage with such bands as The Flaming Lips, the Waves
and other musicians twice their age.

Welcome to Skating
Polly—Edmond’s answer to the punk/pop scene.

“Our parents went to law school
together and still hang out, so that’s how Kelli and I started hanging out—by
default,” said Peyton. “She was six and I was 11, so we weren’t really that
close at first.”

Some kind of kindred spirit
brought the Edmond girls friendship. After becoming step-sisters, they created
their own horror movie, listened to their favorite bands, and on one Halloween
night in 2009, they made music happen.

“I love music, obviously, and I
was always around instruments,” said Kelli. “I decided I wanted to be in a
band. We were just messing around with instruments at a Halloween party and
decided to try it out.” The two girls started playing. Peyton worked the drums
and Kelli picked up a guitar. “I remember people were there and interested,”
Peyton said. “My brother and his friends thought it was cool even though we
were just messing around.”

A few weeks later, the girls
accompanied Kelli’s father, Kenneth Mayo, to the Hook Echo Studios in Norman
where Mayo and Peyton’s mother Amber were recording music. While checking the
microphones, the two girls began singing and playing. It was enough to get
Skating Polly its first gig.

Where the name Skating Polly
came from is actually a bit more complicated. “We originally wanted something
that included both our names,” said Keli. “We had code names of ‘Kate’ and
‘Polly,’ but then ‘Skating Polly’ was just something that flew out of my mind.
I like it. It’s a juvenile sounding name, but we aren’t a kiddie band.”The name
had to grow on Peyton. “I didn’t like it at first, but now I do,” she said.

On June 9, 2010, Peyton and
Kelli performed their first show at the Opolis in Norman. “It was really crazy.
The songs were really simple back then, and we messed up about five times,”
said Kelli. “But I was ten years old, and we were just starting.” The crowd,
however, thought the 10- and 14-year-old punk girls were more than meets the
eye. 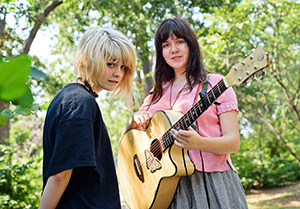 “People told us we were really
good, but I think a lot of it was the novelty of our being so young,” said
Peyton. “But the day after our first show, we got another offer to do a second
show.” From there, gig after gig came Skating Polly’s way, and although the
opportunities came easy, the girls worked hard. Soon, the band was a regular at
venues like the Opolis, the Conservatory, the Hi-Lo and Auntie’s Shanty. They
were the featured band at the Norman Music Festival, and soon Skating Polly was
touring along the West Coast, the Central States and in places like Kansas
City, Phoenix, Denver and Chicago. “If we have a tour, we do about eight or
nine shows a month,” said Kelli. “Locally, we do one or two a month.”

“We try not to overstretch
ourselves,” Peyton said. “We played at South by Southwest (SXSW) in Austin this
year. We did eight shows at SXSW, an annual music, film, and interactive
festival. It was a lot for us to play a show, sometimes two, every day there.”
Though grueling and challenging, SXSW also put Skating Polly in the limelight.

With music influenced by Babes
in Toyland, Bikini Kill, Nirvana, Regina Spektor and The Flaming Lips, the duo
says their music has its own style—a mix of punk, pop, hard, slow and original.
Both girls play drums and piano and sing. Skating Polly just released their
sophomore album, Lost Wonderfuls, produced by Exene Cervenka and mixed by
Flaming Lips drummer Kliph Scurlock. Cervenka, vocalist for the X, became a fan
of Skating Polly after their shows at SXSW. Lori Barberi of Babes in Toyland
and Jody Stephens of Big Star also caught their shows. “I thought it was really
cool to meet them,” said Peyton.

The girls have no intention of
slowing down. In October, Skating Polly heads to Washington to record with
Calvin Johnson of the studio Dub Narcotic and are planning new tour dates. “We
are now dedicated to the music,” said Peyton. “I thought it would be cool to be
famous when I was younger, but now I want to be able to just make music.”

Kelli, who is now homeschooled
to accommodate their touring schedule, said her dream was to be able to just
make enough from music to be able to survive and continue. “There’s still so
much more to be done,” she said. “I want to help out the world in some way, and
I want to be able to use music to do that. I have dedicated my life to music,
and that’s what we want to do.”

Skating Polly will open for Kate Nash on
November 1st at the Metro in Chicago and on November 2nd at the Deluxe in
Indianapolis. For more information on the band, visit skatingpolly.com. 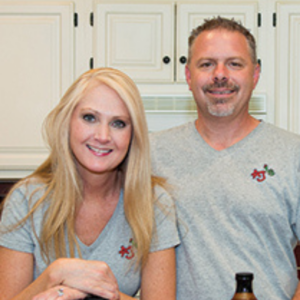 by Mari Farthing
When Greg Johnson's family and friends encouraged him to bottle and sell his tasty homemade creations, he listened. Lucky for us he did.
Read More  > 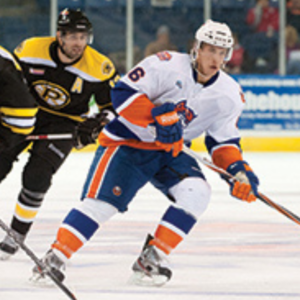 by Paul Fairchild
Matt Donovan is an Okie born and raised and is now playing for the New York Islanders in the NHL.
Read More  >