Roasting for a Reason 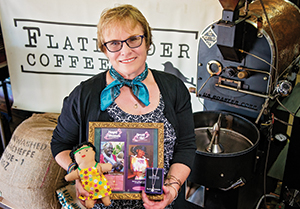 Sharie Wilkins’ story is as varied and robust as the coffee she brews. The Edmond resident has found a way to combine her professional interest as owner of Flatlander Coffee Company with her passion for serving women and children in poverty. Wilkins—a proud mother and grandmother—has been a pilot for Southwest Airlines for 16 years while performing countless days of humanitarian work in some of the most remote parts of the known world. Flatlander Coffee may be nestled in the heart of Oklahoma, but its influence and beneficiaries are spread across four continents.

Flatlander Coffee, originally located in Norman, originated from a common interest between Wilkins’ two sons, Levi and Jake. Through their mission work internationally, the family was exposed to coffee from throughout the world and owned an impressive collection of roasting profiles. Levi had a passion for roasting coffee, so he and his wife Emily founded Flatlander. Through his passion, he developed the different coffee profiles. Due to the success of their business and their growing family, they made the tough choice to allow me to step in and take over the business. “These are family heirlooms,” Wilkins recalls thinking. “I can make time for this.” Her purchase of Flatlander was a crucial moment in Wilkins’ life. “It just hit me—I could sell coffee to help women and children!” Wilkins recalls. She now uses proceeds from Flatlander to benefit two amazing organizations.

The first project is Hope 4 Women International, a nonprofit serving women and children in Uganda and the Philippines. Wilkins has been involved with the organization since 2010.  Hope 4 Women’s mission is to bring “dignity, joy, health, and God’s love to women” through a variety of programs to improve physical, mental and spiritual well-being. The organization administers a one-year sponsorship program that educates Ugandan women in business practices and encourages them to empower themselves. 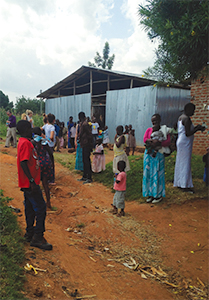 “Graduates of this program have started their own businesses in agriculture, pastries, tailoring and many more,” Wilkins says. “We first and foremost want the women to be accountable and become financially independent.” Wilkins is eagerly awaiting an upcoming graduation ceremony in July, where she anticipates nearly 100 women will participate.

Hope 4 Women also administers the “Dress a Girl Around the World” program. Women from the United States, Canada, Hong Kong, Australia, Scotland and other countries spend a day sewing dresses for girls in impoverished parts of the world. The program has distributed more than 450,000 dresses to 82 countries since 2009.

Wilkins’ second humanitarian project, an orphanage in Medellin, Colombia, is just as close to her heart. Wilkin’s son Jake came across the orphanage while traveling abroad and returned to tell his mother about the amazing work being done there. Recognizing that many children “age out” of the orphanage only to return to life on the streets, Wilkins helped start a program to teach life skills to those who are about to leave its custody. “We find children who are at risk of becoming homeless or worse,” she explains. “My goal is to make these children self-sustaining adults once they age out.”

She acknowledges that her volunteer work can be emotionally and physically draining. “We see so much heartbreak. We interact with people who live in extreme poverty and face challenges most of us can never imagine.” Despite witnessing such desolation, Wilkins is eternally optimistic. “The women and children I work with give me so much more than I could ever give to them. When you see gratitude and joy in their faces, it makes it all worthwhile.”

“I don’t think I knew all those years ago how God was putting it all together, but He was,” Wilkins explains. “He is writing my story. I’m just trying to keep up!”

Wilkins’ enthusiasm for serving others is matched by an energy that seems limitless. As a pilot for Southwest Airlines, she already has a demanding job. She commutes to Dallas for a day before beginning her work week, which typically consists of four-to-five day increments before commuting back to Edmond. 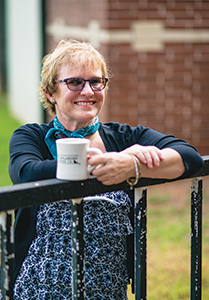 Seniority affords some pilots to pick their preferred hours, a policy Wilkins has used to balance her “day job” with her several humanitarian projects. For years, company policy permitted her to convert her volunteer hours to airline tickets, which she would then donate. This detail perfectly demonstrates Wilkins’ passion for charitable works—she could have used those airline tickets for a personal vacation, but instead used them in the service of others.

The roasting profiles Wilkins uses for her coffees are not just the products of proper temperature control and other technicalities—instead, they are imbued with the stories of those Wilkins has met during her years of international humanitarian work. “Every roast we do is done with the needs of those women and children in mind,” Wilkins adds. She’s taken roasting courses in Rome and Columbia, which has only enriched her passion for coffee. In addition, through her son Jake’s love of coffee and travels, he has experienced many different coffees and he continuously shares his input through many coffee tastings. Wilkins uses a 3-kilogram roaster, but plans to upgrade to a larger size as the coffee business expands.

Wilkins readily acknowledges that her grueling schedule is getting more tiring as the years go on, but she shows no signs of slowing down. “Its especially hard to leave my grandkids for long periods of time!” She draws her energy from the people she helps. “When you help fill a material or spiritual void in someone’s life, there is just so much joy.” 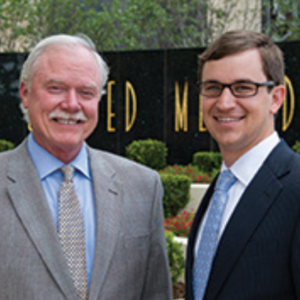 by Morgan Day
With the opening day of their new facility drawing near, members of St. Luke's United Methodist Church's Edmond campus are ready to impact the community in ways they never could before.
Read More  > 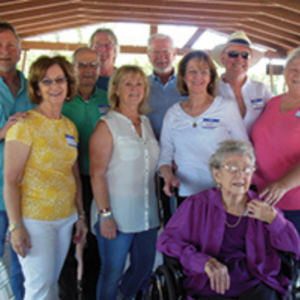