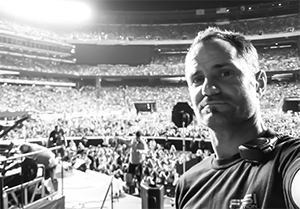 Kenny Ruhman already knew he was lucky to find his dream job, but it was the night that he danced on stage with The Dixie Chicks in front of thousands of fans when it hit home—he was living the life.

Ruhman has all the stories that come with a life of traveling and working with the biggest names in music. He’s rubbed elbows with artists like Bruce Springsteen and Beyoncé. He became friends with country music powerhouses and others.

In September, he left for a nine-month tour with Lady Gaga across the US and Europe. Ruhman is a “rigger,” the man who climbs the high towers and rigging at the top of stadiums and venues to hang lights, sound equipment and all the other magic that makes a concert a success.

“People think of roadies as that fat English guy in shorts and a t-shirt who parties with the band all the time,” Ruhman said. “Sure, there’s still some of that, but that’s not what we are. Concerts are so tech-savvy now—you have to be a professional.”

However, Ruhman is still amazed and thankful that a kid working construction in Midwest City—through luck and hard work—became one of the most in-demand riggers in the rock and roll world.

It Started with a Girl 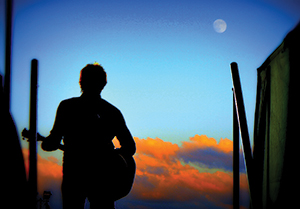 “It all started with my wife, Tiffany,” Ruhman said. “We were high school sweethearts and after school, I was doing construction and she was going to college.” Tiffany urged her then-boyfriend to find a career he was passionate about. On her advice, he began studying music at Florida’s Career Institutes of America in 1989. Quickly, he found that video was more to his liking, and he earned a music video business management degree. In 1991 he decided to return to his hometown.

Ruhman always prided himself on working harder and better than the other guy—that work ethic paid off. While shooting basketball games for Cox Cable, he was asked to film a Bruce Springsteen concert in Chicago in 1992. More than 40,000 fans packed into the amphitheater for one of the greatest rock shows ever witnessed. “It was amazing,” he said. “Bruce Springsteen was all over the stage, grabbing my camera and kissing the girls in the crowd. I was hooked. This is what I wanted to do.”

Or so he thought. After shooting video at concerts, Ruhman noticed what he called “the rock stars of crews”—the riggers. 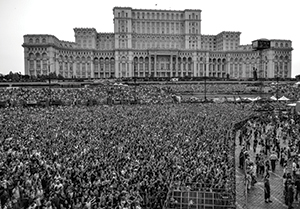 Ruhman already had Springsteen, Billy Joel and other big bands under his belt as a cameraman, but the rigging job is what really excited him. He partnered up with an old school friend, Mike Gomez, who was working as a rigger. Through Gomez, Ruhman found his niche in the rock world.

For years, Ruhman worked as a local crewman, and he was hired regionally when bands toured, but he had dreams of being a tour rigger. “I became the go-to guy,” he said. “I volunteered, always offered to help, took on the jobs.” In 1999, he was finally offered a road tour position for rock powerhouse ZZ Top. “Mike Gomez started touring with bands, and someone called him to work the ZZ Top tour,” Ruhman said. “He couldn’t go, so he recommended me. That was my first real tour.”

Touring with major concerts isn’t a six-month long party. The crew sets up concerts, tears down rigging afterwards, gets back on the bus and does it again the next day. 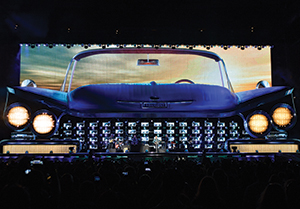 Since that first tour, Ruhman has worked hundreds of concerts and big events. He rubbed elbows with bands like Jane’s Addiction, The Eagles, Bon Jovi, Van Halen and more. He traveled from the US to Peru to Australia to Europe and beyond. His stories of life on the road could fill a book. “One of my favorite memories was when I was working the ’97 Super Bowl,” he said. “We were setting up the rigging for circus guys to bungee jump from the center top, 300 feet up, and they convinced me to do it. I bungee-jumped in the Superdome, did a quadruple flip—it was epic.”

Life as a rigger has its pros and cons. The job pays well and it’s always an adventure. The downside is being away from his family.

“But, it’s been the best life,” he said. “I’ve realized what I do is a career, but also a party. I’ve been very lucky. Be that ‘go-to’ guy—go above and beyond. Be like that with everything in life.” 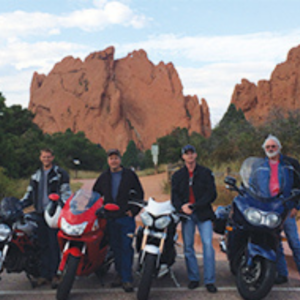 October 2014, In Other Words with Dave

by Dave Miller
Dave is going on a mancation.
Read More  > 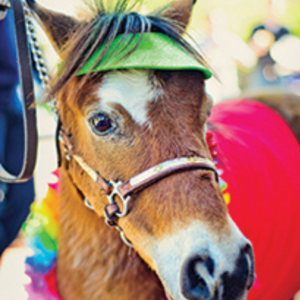