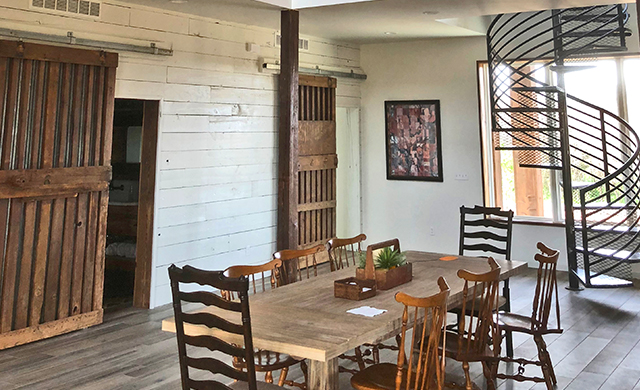 Horses and hay rides are part of Darci Oplotnik’s childhood memories. She and her seven cousins grew up playing in their grandparents’ dairy barn, four-wheeling all over the ranch and having gunny sack races in the quarter horse arena.

After 28 years, a downturn in the racing industry forced Grandpappy Ellis Gragg to sell the 640-acre property in 1991. Coffee Creek Ranch, which had begun as a Land Run homestead, became Coffee Creek Golf Course and neighborhood. The golf course gave new life to the buildings on Grandpappy’s ranch. The house became a clubhouse and the barn became golf cart garage.

“One time I visited the golf course just to look around,” Oplotnik said. “They hadn’t done a ton of remodeling. The orchard became the parking lot, but in the upstairs clubhouse, where the administration offices were, the bathroom still had Grandma’s blue butterfly wallpaper and hand towel rack. It was like being in a time warp from 30 years ago.”

In 2017, the property underwent another change when the golf course closed unexpectedly. “My cousin, Jill Olson, was driving by and saw the sign that an auction was being held on the property that day. She called me in a panic,” Oplotnik said. “Jill, Grandpappy and I rushed over, and within a few hours, I had purchased the old barn and windmill.” Oplotnik and her husband had the barn disassembled and stored it in a semitrailer for future plans.

Although the Oplotniks live in Edmond, they own a 5,000 acre cattle ranch and wheat farm in Northern Oklahoma. In cooperation with Oklahoma wildlife management, part of the land is planted with native grasses and set aside for deer, turkey and duck hunting. “So I decided we needed to build a farmhouse there,” Oplotnik said.

Using the historic layout of the barn, Oplotnik drew an initial draft for a new farmhouse, keeping the layout as similar to the original barn as possible. Taking into account that the barn was two stories tall, with horse stalls below and a hayloft above—the center of the farmhouse is designed to have a high, open ceiling. Oplotnik credits her cousin, Shannon Ford, an interior designer, with the idea of using the old windmill blades as a decorative art element hanging from the ceiling.

“We’ve used every possible timber and beam from the barn. Every wall has barn wood on it. My grandpappy’s horse-stall doors are sliding doors within the house,” Oplotnik said. She’s proud that her children and future grandchildren will stay connected to the family history of Coffee Creek Ranch. “We are a close-knit family, and even though my kids didn’t grow up at the ranch, they hear lots of stories. Like the time my cousin and I decided to make oatmeal for the horses. We took a water hose to the feed truck and ruined an entire load of oats. Grandpappy wasn’t real happy with us.”

But Grandpappy was “super happy” when his granddaughter rescued the old barn and windmill. Sadly, he was unable to see the completed farmhouse, because he passed away in late summer. “I’m proud to honor him with the farmhouse,” Oplotnik said. “It’s bittersweet since he didn’t get to see it finished. I just hope he’s looking down now.”