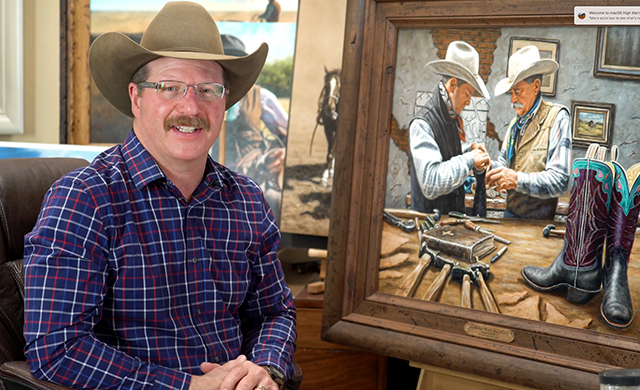 Boaldin grew up on a cattle ranch, and he loves to tell visual stories about the American cowboy’s way of life. After some ranch work of his own, followed by a 30-year career as a commercial artist for The Edmond Sun, Mardel, and The Oklahoman, Boaldin is now focusing on his art full-time. That, and his Telly-awarded, Emmy-nominated television show, Art of a Cowboy.

The show was born when Boaldin visited an Oklahoma ranch in early 2017, seeking ideas for new paintings. He took photographs of the animals and the scenery, but was equally inspired by the passion of the workers. “These people are humble, and quiet and hard-working—and they’re feeding the world!” Boaldin said. “Some people think ranching is dead and gone, but it’s still going strong.

During a chance meeting with publicist, Saraa Kami, Boaldin shared his idea that he’d like to visit ranches all across the United States and tell their stories on canvas. Kami saw a bigger vision of also telling these stories on screen. Five days later, Boaldin was at his family ranch filming the first episode! The premise of the show is that viewers meet ranching families on film and see how they live. Boaldin, the host, then creates five oil paintings based on his visit.

“The show is unscripted. It’s just learning the story of their lives,” Boaldin said. “After visiting the ranch, I look through the footage for the scenes that I think are the most touching to paint.

As a thank you to the families, Boaldin offers a canvas print of their favorite painting and the opportunity to be first to purchase any of the other paintings. The remaining art is then sold to the public, with pieces available at local art galleries in Edmond.

“Selling the originals is what keeps me fed and the electricity on, but I’m the most happy when I’m painting,” Boaldin said, “When people buy a painting, they feel very connected to it, especially the ones from the shows, because they’ve seen the paintings come to life and seen the action going on behind it.

Boaldin is currently filming the 8th episode of Art of a Cowboy, which airs on the local OETA station. The July show features a 150-year-old ranch in Oklahoma that’s been owned by the same family for five generations. Art of a Cowboy has also received national recognition and will soon be seen on the national Public Broadcasting Station (PBS) and, contract pending, a national cowboy channel.

Although being a full-time artist and television show host is fairly new territory for Boaldin, he’s thrilled to do what he loves and bring recognition to the real-life cowboys he admires and views as tough and rugged Americans.

“The whole show is a win-win situation. The ranchers love to tell their stories, and I get to put their life on canvas,” Boaldin said. “I believe it’s important to bring the legacy of their work to light, because they are passionate about getting food to your grocery store. They lived the ranching life for generation after generation. They want to keep the cowboy life alive, and so do I.