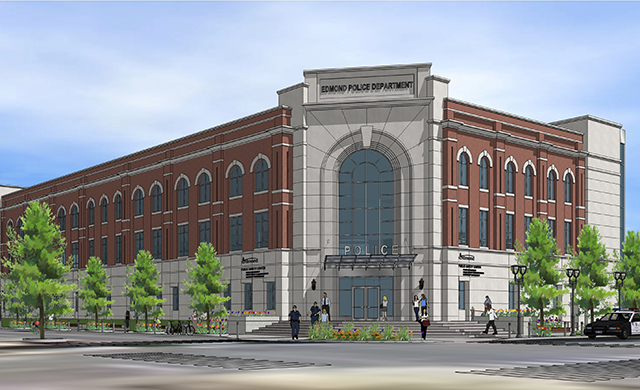 It’s a question of space. The
answer has been seven years in the making. Right now it’s just a hole in the
ground at the intersection of First and Littler. Upon completion in early
summer of 2015, it will be one of the most important spaces in Edmond. That
space, the new Edmond Public Safety Center, will be filled primarily with the
Edmond Police Department and the city’s mission-critical Emergency Operations
Center.

On the surface, new space
doesn’t seem like a lifesaver. But it is. New equipment and improvements for
important services like the city’s 911 center need more space. More space means
room for the people who operate the equipment for emergency services and
provide cutting edge, responsive service.

Edmond’s population has more
than doubled since 1980, when the existing police department was built. In that
time, Edmond’s land area has quadrupled. The police department staff has grown
but the room needed to operate in hasn’t changed.

“Our 911 center runs into space
issues frequently because there are only five positions inside. If five people
are working in that space, there’s no more room for anything else to happen
there,” said Edmond’s Director of Public Safety Communications and Emergency
Management, Matt Stillwell. “An important example was the activation of the
Emergency Operations Center this past spring during the May tornadoes. Already
very busy and crowded, the 911 center filled up quickly because Edmond was
actually hit by a tornado. The additional, critical staff reporting in to help
had no workspace.”

Edmond Mayor Charles Lamb is
frustrated with the existing facilities. The 911 center’s operators, he says,
work in cramped conditions in a leaky basement. The current center has reached
the limits of its existing space. There’s so little of it, in fact, that the
actual emergency management control room isn’t even in the same building as its
various department managers.

“Our jail was built for a city
population of 35,000 in 1980. Edmond has more than doubled in population since
then and our jail hasn’t been expanded accordingly. There are six usable cells
allowing us to jail eight people at one time. We arrest many more than that on
a typical weekend night. We’re forced to get the judge out of bed at 3am to
release them on an Own Recognizant Bond. The other option is to transport
prisoners to the county jail—taking an officer out of his district for at least
two hours,” says Steve Thompson, Deputy Chief of Police.

A major improvement for the
Edmond Police Department will be private rooms where victims of crimes can give
reports without being in close proximity to prisoners. “Currently, there’s no
accommodation for victims, placing citizens in uncomfortable conditions when they
need to make reports and maintain some privacy.
This is a situation I have personally had to deal with and it is not
what Edmond citizens expect or deserve,” said Mayor Lamb.

The new space also offers a few
key technological advantages. What engineers call “redundancy” is one of them.
In plain English that means more than one. The existing 911 center has only one
line coming in for 911 calls. If something happens during a disaster and that
one line goes down, local 911 calls are rerouted to a different location,
potentially slowing the response times of emergency responders. The new center
will feature multiple lines coming in. If one goes down, there are two others
waiting to handle the load and therefore 911 calls are routed appropriately.

The new space has to be
adequately powered as well. Electrical power comes in from two locations. If
those both fail, there are two backup generators in place. If one of those
fails, officials will be able to choose the mission critical functions that
will be powered by a single generator. That’s backup after backup that the
existing Emergency Operations Center doesn’t have.

In growing cities, space comes
at a premium. So do critical services like 911 responses and a police
department equipped to deal with everything that comes its way. The new Public
Safety Center will cost almost $35 million when finished. Saving lives,
however, is a return on investment that can’t be measured in dollars. 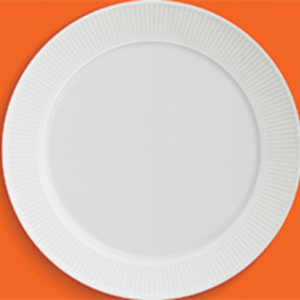 Meals from the Heart

by Lance Evans
Several churches and neighbors band together every Thanksgiving to put on the Edmond Community Thanksgiving Dinner, providing a meal and fellowship to those who might not have had the opportunity this year.
Read More  > 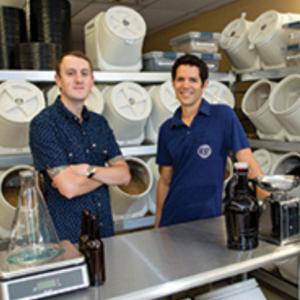 by Mari Farthing
The craft of brewing grows in popularity each year"���and is currently thriving in 21st-century Oklahoma.
Read More  >