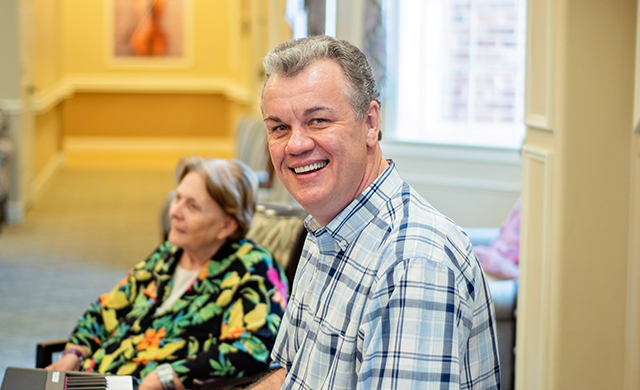 It’s incredible to see the power of music work in their lives, especially Alzheimer patients,” Graham said. “Several times a month, I’ll be playing, and all of a sudden, I’ll see the staff getting very excited. Someone who hasn’t spoken a word in months starts singing along to a hymn. It’s embedded in their soul. It’s such a privilege to witness this, and I see it happen all the time.

Graham is a man of great enthusiasm. He receives much joy from his work as a musician–to the point that he spends his holidays playing for residents. Although he charges for his playing, he keeps his fees to a minimum, because, “Money can’t buy the joy I get from making listeners happy.

His fingers fly over the keys at mind-boggling speed. Graham calls it, “singing songs with my fingers.” He usually plays five to seven hours a day, but on Christmas he plays nine hours. “It sounds crazy, but my fingers don’t get tired. That’s how I know it’s God-inspired.

Although Graham plays a wide variety of music, from country classics to Frank Sinatra favorites, his goal is to keep the old church hymns alive, because that’s the music that speaks strongly to the elderly. As he plays, he looks into the faces of his audience, knowing that even if they seem “checked out,” his music is reaching them in ways he can’t understand.

“Sometimes I see people smile or cry,” Graham said. “Probably 100 people a week tell me it’s the best music they’ve ever heard. I’m not bragging. I feel it. I see it. One song can bring back a thousand memories. That’s why I’m always watching; waiting for that happy moment.”

Graham never had formal music training. He only plays by ear. He taught himself to play the violin and accordion before he was five, and then he begged for piano lessons. Although he had perfect pitch, the local piano teacher said he was too young, so he said, “Fine, I’ll teach myself.” When he was 14-years old, his church needed a piano player, so he took the job, which became his foundation for spiritual music.

As an adult, Graham only dabbled with music. He didn’t return to music until tragedy struck during his early forties. His wife passed away from cancer, and he went through a “dark valley” of depression for four years before he started playing for senior citizens. Now, he is playing full-time, and is often invited to perform at churches and share his story.

Every Tuesday night, Graham hosts a Facebook Live performance, taking song requests from around the world. He has thousands of hymns memorized, and it doesn’t matter if he hasn’t played the song since childhood—he can still play it perfectly.

Graham has perfomed at the White House ten times–for Bill Clinton, George W. Bush, and Donald Trump. In 2017, the Trump Administration invited Graham to play during the White House Christmas tours. “They seemed shocked that I was willing to play for two and a half hours without a break,“ Graham said. “Why take a break when I’m playing on the Steinway piano given to President Roosevelt?

Graham sees his White House concerts as a big honor, but his true love is to perform for his hometown audiences. He’s a celebrity among the senior citizen set, and they often ask for his autograph. “I’d rather play for them than make millions,” Graham said. “Every day, I’m thankful to play and minister through music, and I’m excited to know that the best is yet to come.