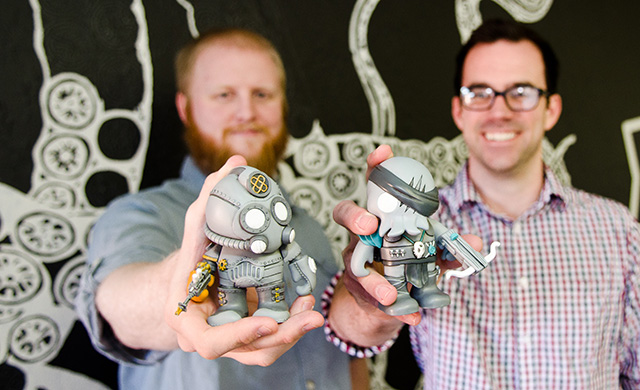 James Hugo, 30, and Chase
Layman, 27, co-owners of Edmond’s Wheelhouse Graphic Design studio, are
storytellers. But they tell their stories in a most unusual way. There are no
pen and paper. There’s no word processing. They express themselves with the
unlikeliest of media—toys.

Their latest storytelling effort
takes the form of RIVALS, a richly textured tale best described as “pirates
meets steampunk.” The narrative features two civilizations, the greedy Cogs
fighting against the nature-loving Nautilus for a mineral that makes steam
power possible. In the deepest of the deep seas is the Lurk, the battleground
where they clash for supremacy. 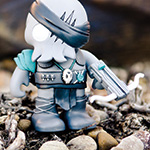 The aesthetics of “steampunk”
harken back to the Industrial Revolution, a time where steam powered the world.
The retro-futuristic look of steampunk— captured beautifully in RIVALS—was
kicked off by authors H.G. Wells and Jules Verne, both writing their best-known
works of fiction at the tail-end of the 19th century and the opening years of
the 20th century. The look and feel of the genre includes an array of hoses and
pipes, industrial contraptions of all kinds and, of course, steam.

The nautical theme of the toys
comes straight from the imaginations of Layman and Hugo who, as storytellers,
are fascinated with all things maritime. “RIVALS actually started out as
something completely different. Our shop is practically built around a nautical
theme—everything from our logo to the design of our office,” says Layman.

RIVALS is a labor of love for
Layman and Hugo—the product of a fascination with toys that sprouted from their
childhoods. Growing up, they didn’t just play with toys; they used them as
springboards for creating richly textured stories. “My love of toys goes all the
way back to when I was a kid,” says Layman. “I loved Legos. I loved building
things. I loved creating my own imaginary worlds. I grew up drawing and
creating these worlds with stories, characters—even languages. Toys were a part
of that. They’ve always fascinated me. That’s what led me to the idea of making
our own toys. James and I both love toys and we just asked ourselves, why can’t
we make our own?” 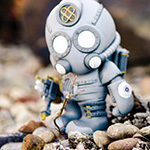 Hugo and Layman are new to the
toy-making game, but they’re moving ahead undaunted. “The professional in me
wants to say that what makes us qualified to make toys is our many years of
experience in the creative field. The simpler answer, though, is why not? What
qualifications do you need to try something? Let’s just try it and see if the
community grabs on to it. If they do—great. If not—hey, we tried,” says Hugo.

Making toys isn’t cheap. Layman
and Hugo are turning to Kickstarter.com to raise the funds needed to take their
toys from prototype to production. Even with a limited, collectible run of
1500, the cost—around $20,000—is intimidating. The proto-types are completed
and the package designs are ready, but they’re waiting for funding to push
RIVALS on to full production.

To finance the project, Layman
and Hugo will be launching a Kickstarter.com campaign this spring. Kickstarter
is an online vehicle for raising money to complete creative projects from film
and music to games and toys. The RIVALS creators are working hard to flesh out
their concept and hope to use the site to pull in the investors they need.
“Money is the big issue right now. We’ve laid out a little bit for the research
and prototyping,” says Hugo. “What we’re working on now is lowering the funding
amount we’ll be asking for our Kickstarter campaign. There’s a lot of different
ways to do that. But money is the main thing. It all boils down to the money.” 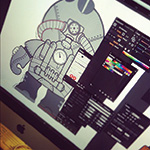 For Hugo and Layman, passion is
more powerful than steam. They are taking what they love, making it real and
putting it out there for toy fans everywhere. And they’re glad to be doing it in
their home state. “I don’t know of any toy designers in Oklahoma. There might
be a few little ones here and there, but most of the artists that do this stuff
are in LA. It’s just exciting to try to something like this, to take a risk
like this, in the middle of Oklahoma.” 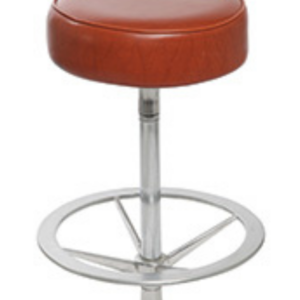 by Louise Tucker Jones
My son, Aaron, suggested I let my readers in on some of the crazy things that have happened to me, saying, "If you can't think of anything, I can give you plenty of information."�� What in the world could he mean?
Read More  > 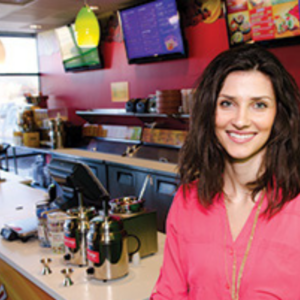 by Laura Beam
If you've ever pleaded with a toddler to eat his fruits and vegetables or abandoned the well-intentioned apple and yogurt on your desk to join colleagues for lunch"���where the gossip was even juicier than the cheeseburger"���you're not alone. Trying to maintain nutritional balance in a world replete with delicious distractions is a daily challenge.
Read More  >