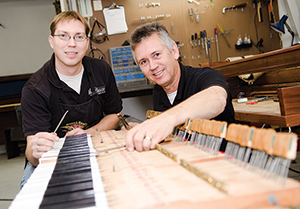 Dodging roadies and stage hands
while setting up a U2 concert or tuning equipment before a legendary
performance by the Eagles or chatting with Michael Bublé—it’s all in a day’s
work for Gary Bruce and his son Jordan.

Working with pianos comes
naturally to the father-son duo. Gary Bruce began in the piano tuning business
in 1979, catering to a range of client needs. Whether handling the annual
tuning of a family piano or restoring a prized classic, Bruce Piano of Edmond
approaches each task as a labor of love. They are frequently called to concert
venues, movie sets, and other on-scene locations to tune the pianos that will
be used. In addition, they manage the tuning for area schools and organizations
like OSU and Oklahoma Christian University. They also refurbish and move the
majestic instruments.

Bruce grew up involved in music,
performing in bands and majoring in it in college. While in school he met his
wife, also a music major. They married, moved to Edmond and had four children.
In addition to Jordan, who is the oldest and involved full-time in the family
business, the three other children have carried on the love of music, studying
it in college. Two of Bruce’s kids even have musically involved spouses.
“They’re all involved in the music business, which they sort of inherited from
us, so it’s kind of fun,” Bruce says.

He speaks almost reverently
about music and its ability to not just improve other areas of skill, but also
to transcend all boundaries. “Everybody can hear a Beethoven sonata and they
hear the same thing. It moves them regardless of language skills,” he says.

When it comes to the piano
specifically, Bruce’s respect is evident. “The piano is just a fantastic
musical invention and creation that’s able to be so expressive. The instrument
itself is fairly complex, but to be able to play one is very easy,” he says,
adding that “some instruments are not so easy, but any 18-month-old child can
sit down and push a key, hear that and make a connection to ‘I made that
happen,’ so there’s something really beautiful about that.”

Bruce clearly passed along his
love for the piano to Jordan. “I grew up always working on pianos. That was
almost a part of my chore list. Before I could go watch Ninja Turtles I had to
put on a set of bridle straps in an upright piano. I kind of thought all kids
had to do that,” Jordan laughs, adding, “I didn’t know it was weird I was in
there putting pianos together but I liked it because I got to work with my
dad.” Initially, Jordan didn’t expect to go full-time into the family business
so quickly. He was about to take on the ownership of a restaurant when his
father’s shoulder injury called him into running Bruce Piano for a year. Then,
when his father recovered, Jordan says he knew he was where he belonged.

“I loved it so much I just
stayed on. There was no way I was leaving after that,” he says. In addition to
the day-to-day work, Jordan is constantly developing ideas for growing the
business. Bruce Piano now has five employees and is still as busy as ever.

Jordan compares their work to
auto care. “You always need an oil change and it’s the same thing with piano
tuning,” he says. He explains that although the piano tuning business is
unregulated, there is a governing non-profit organization dedicated to quality
of the craft. This is the Piano Technicians Guild, of which Jordan and his
father are both members.

Jordan has also participated in
training opportunities to further his knowledge. He became only the second
person to be a second-generation graduate of the Yamaha certification program,
following in the footsteps of his father. He has also been trained at Steinway
in New York after getting the opportunity to jump ahead on the potential
five-year-long waiting list.

For Jordan, the inclusion of
refurbishment in their list of services is invaluable. He says that not many
technicians offer that option and he enjoys being able to put new life into the
classics and often save a family heirloom. “It may be an old family piano
that’s completely fallen apart and we bring it back to be like-new. I’ve
delivered pianos where the whole family is there and people just start bawling
because the piano is back.”

When it comes to Bruce Piano, family
definitely strikes a chord. 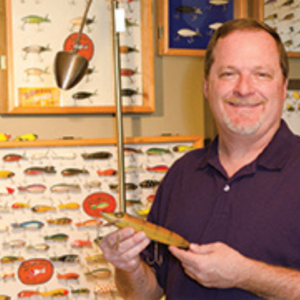 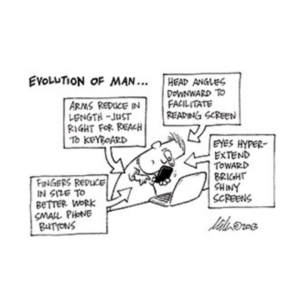