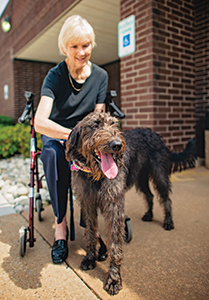 Dogs have been used for a variety of purposes throughout human history—farming, hunting and herding are made easier when assisted by a canine companion. Today, service and therapy dogs are providing even more invaluable services to their human companions by assisting them with physical, mental and emotional afflictions. A New Leash on Life, located in Oklahoma City, trains service and therapy dogs for clients throughout the state. CEO Barbara Lewis has been training dogs for most of her life, and her staff shares her expertise and passion for their canine companions.

There’s an important difference between a service dog and a therapy dog, Lewis remarks. “Service dogs are trained for specific clients with physical or mental disabilities. They promote independence for persons with disabilities by giving them a more functional lifestyle,” Lewis explains. “They’re with the owner everywhere they go and can do all sorts of tasks. We’ve trained dogs to open doors, pull wheelchairs, turn lights on and off, respond to smoke alarms and all sorts of other jobs.”

The agency prefers to use Labradors or golden retrievers due to the breeds’ temperament, size and intelligence. “We need a dog that will be able to maintain its composure in crowds and remain completely obedient to its owner, and they’re among the best breeds for those purposes.”

“Therapy dogs provide comfort to individuals or large groups of people without the need to perform specific tasks. We’ve trained dogs that are used in schools and universities, nursing homes, courtrooms, and other environments where people are under stress.” Lewis and her staff train 100-150 volunteers and therapy dogs annually. “Volunteers and their dogs all receive basic manners training before moving on to the therapy portion,” Lewis adds. A New Leash on Life also relies on volunteer “puppy raisers” who help train the dogs so they’re ready for specialized training.

A New Leash on Life also operates the highly successful Prison Pen Pals program, which allows prisoners at the CCA Davis Correctional Facility in Holdenville to train shelter dogs into well-behaved companions over the course of ten weeks. Trainers go to the prison each week to work with prisoners and their canine friends. Each dog stays in the cell with two prisoners, who are responsible for house-training and obedience training.

“It’s a wonderful program because it teaches the prisoners to value something and it gives them a sense of self-worth. Many of these dogs would otherwise be euthanized, so we save the dog’s life and help prisoners rehabilitate while they’re in custody,” she notes. 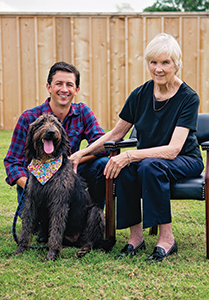 Service and therapy dogs are donated by breeders when the dogs are approximately eight weeks old. “We continually evaluate their energy, confidence and the traits they’ll need as a service or therapy dog. We try to make the decision about what each dog will do by the time they’re eight months old,” Lewis says. “We raise around 20 puppies each year, and approximately 40 percent of them will become service dogs.” The rest are trained as therapy dogs or, in some cases, are adopted by new owners who will give them forever homes.

I’m fortunate enough to have adopted one of the dogs that didn’t quite make it through her initial training and evaluation. The agency names their dogs after popular Oklahomans and landmarks—our black Labradoodle was named Shartel when my wife and I adopted her, and we were immediately smitten by her sweet demeanor and intelligence. After spending a few days with her, we decided to rename her Arya. For those who haven’t read George R.R. Martin’s epic A Song of Ice and Fire or watched HBO’s Game of Thrones, Arya Stark is a fiercely independent young woman and one of the story’s main protagonists. My wife and I both love the books and show and found that our new dog shared Arya’s penchant for individuality and rule-bending, so the name seemed like a natural fit.

When she’s not busy protecting the backyard from squirrels or stockpiling tennis balls, Arya loves to learn new tricks and is eager to please her owners. She’ll begin therapy dog training with A New Leash on Life this month so that she can be yet another of the agency’s goodwill ambassadors to those in need of comfort and support.

We’re still learning what dogs are fully capable of, and research continues to reveal more about the special relationship between dogs and humans. Lewis and her staff at A New Leash on Life are fascinated by this relationship and it’s the motivation behind the wonderful work they do throughout the state.

Learn more about A New Leash on Life at www.anewleashinc.org. 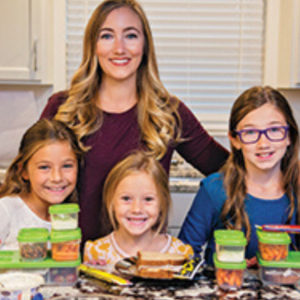 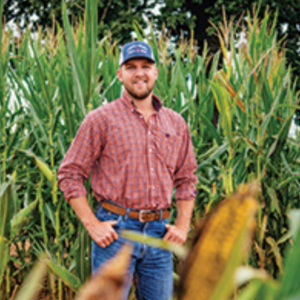