Out of the Wood Work

Put one physicist and one chemical engineer together and you get…a sawmill?

Ryan Joyce and Zach Welton are amused by this result, themselves. Neither one aspired to build a sawmill until a year ago when friendship and conversation came together during the pandemic.

Cuttin’ to the Story

Zach and Ryan both grew up on farms. Ryan’s hobby is woodworking and Zack, who has dabbled in metalwork since high school, got the woodworking bug a few years ago as well.

Last year, an acquaintance of Zach’s mentioned that his company, near Ada, Oklahoma, was going to burn a 300-year-old pecan tree. Zach said, “Don’t burn it, I’ll come get it.” His chainsaw, however, was hardly up to the task.

He invited Ryan to help, and during their multiple weekend trips to cut wood, they discussed their options. “Chainsaws weren’t cuttin’ it,” Ryan said. “The price of lumber had gotten super high, and I had a harebrained idea. I said, ‘Zach, it’s too expensive to buy wood, so let’s make our own? Why don’t we go in together and buy sawmill equipment that can handle this?’”

After some online pricing, they found a YouTube vlogger who demonstrated how to build a sawmill from scratch. They then reviewed the template and decided that they would give it a try. After all, building one large enough to cut the giant pecan tree would actually save them money.

The Hobby That Grew

Last spring, Zack and Ryan became sawmill warriors. They worked every weekend until fall, building the sawmill in Zach’s driveway, where they could easily access tools and make adjustments before moving it to Zach’s acreage. The base frame is 20 feet long, and the carriage is 11 feet tall, made of thousands of pounds of high-velocity steel. In November, they successfully cut their first pecan log—and then, more wood started coming out of, well, the woodwork!

A former co-worker had some large pine trees that were being cleared for a housing lot in Choctaw. Then, an ice storm damaged trees in Ryan’s yard. In a few short months, they hauled about six semi-loads of rescued wood, a few logs at a time, to Zach’s acreage, where it is now cut, stacked, and slowly being made into boards.

“It’s all wood that was slated to be chipped and burned otherwise. Some of it is three feet across and hundreds of years old,” Zach said, “so, I’m glad we can repurpose it.”

Zach and Ryan have come to realize there is a large market for locally-sourced wood and milling services, but managing an unexpected business, while working full-time in their chosen careers, is a possibility with which they are still grappling.

“We’re socially inept,” Zach said with a laugh. “We never envisioned this as a business.”

For now, both are focused on their own woodworking interests until they decide if they want to take the sawmill in a commercial direction.

“I rescued and restored many of my great-grandfather’s tools when he died,” Ryan said. “His mission was to make cedar boxes for his whole family. He didn’t get to finish, so now, I’m using his tools and my wood to finish that project for him.” Zach, likewise, is honing his woodworking skill to make boxes with dovetail joints, a traditional carpentry technique.

“We’ve enjoyed combining our skills and interests,” Ryan said. “We never expected it to snowball like this, but now, we have a sawmill!” 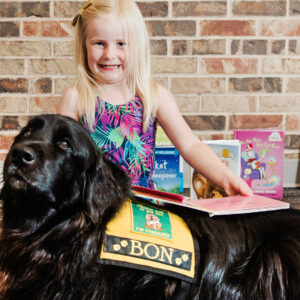 by Maggie Murdock Nichols
Bon, a twelve-year-old black labrador and golden retriever mix, wags his tail with controlled excitement as he sits beside his owner Shawn Coughlin. Bon is eager to greet children as they walk in with books in hand. Bon is a certified therapy dog and for the last ten years, has provided comfort for those left...
Read More  > 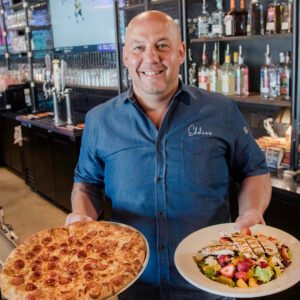 by Laura Beam
Meet Eddie Wrenn III–the namesake behind some of Edmond’s best-loved food experiences. This third-generation restaurateur is passionate about serving his community and creating dining destinations with outstanding menus and moods to match. And after 30 years in the biz, his distinct Edmond restaurants–Eddie’s Bar & Grill, two Hott Wings locations and The Lounge–are buzzing with...
Read More  >