Our Community Rallies in Support

On one side of Edmond, a line formed behind Charley Howard’s lemonade stand, and nearby, a queue of cars waited to be washed by hand. On the other side of town, hundreds of motorcyclists revved their engines for an organized ride, and at Edmond’s Crossfit 822, nearly 100 athletes started their strenuous workout in honor of a fallen friend. Each of these acts, though unique in nature, were done in a spirit of unison – heartfelt support for Officer Nelson.

Edmond Police Department Sergeant Christopher James “C.J.” Nelson died in a multi-car crash in Oklahoma City on July 19. He was the first officer to lose his life in the line of duty in department history.

As news of his death spread across the nation, the sense of loss is felt deepest by the family he left behind – his wife and two children, his brothers and sisters at the Edmond Police Department, and the community he faithfully served.

In the face of such tragedy, words fall short. Recognizing this, the Edmond community immediately traded them for action, organizing acts of love, support, and donations from all directions.

Officer Nelson’s funeral created a visible representation of the magnitude of his impact as surrounding law enforcement, and even out-of-state agencies formed a multi-mile motorcade. His motorcycle community also organized a ride in his honor.

“Officer Nelson wasn’t a member of our group,” said Will Krueger, a member of the motorcycle club 405 Riders. “But as a fellow rider and a law enforcement officer, we were compelled to show our support for him and everyone who knew him.”

The memorial ride grew from there, with over 550 participants raising around $5,000 for the Nelson family. Officer Nelson’s CrossFit family was also eager to offer their support for the man who embodied their catchphrase: “First to finish, first to cheer”.

“C.J. brought a lot to our gym. He was always one of the first to finish, so he’d often finish workouts alongside other people,” said Jenae Judge, owner and head coach of CrossFit 822. “He was a big part of our family and he truly loved his community.”

The gym has since taken steps to preserve Officer Nelson’s presence and personality within their community, hosting tribute workouts and installing an honorary plaque on the peg-board he built by hand. Not only did he build it, but he was the only person to ever successfully climb it. In his honor, it will remain that way forever.

While nothing can make up for his loss, Emily Ward, Edmond Police Department public information specialist, shared the department’s perspective on their city’s support – that all support is meaningful, no matter how it manifests.

“We see people doing whatever they can,” Ward said. “If they can’t donate, then they give their time. If they can’t volunteer, they donate. Whether they knew Officer Nelson or not, people want to honor him and it’s incredibly encouraging.”

Those interested in offering support can do so via the Nelson Memorial Fund organized by St. Luke’s United Methodist Church (see and scan the qr code below.) All donations go directly to the Nelson family. No matter the size or form of support, the Edmond Police Department emphasizes its impact.

“The Edmond community has provided exceptional support for its public safety personnel for many years. However, their response to the recent on-duty death of Police Sergeant C.J. Nelson exceeded all expectations,” said J.D. Younger, Edmond’s chief of police. “From food to funds to tears of empathy, Edmond and the surrounding community gave more love and support to members of the Edmond Police Department and the family of C.J. Nelson than could have ever been expected. We will never be able to convey the level of gratitude and appreciation that we have for our community.” 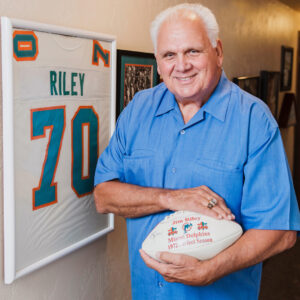 by Maria Veres
Jim Riley knows what it’s like to overcome long odds. When he joined the Miami Dolphins as a defensive lineman, they were a raw, new team that had never scored a winning season. Four years later they catapulted all the way to the Super Bowl. But the statistic that means the most to Jim doesn’t...
Read More  > 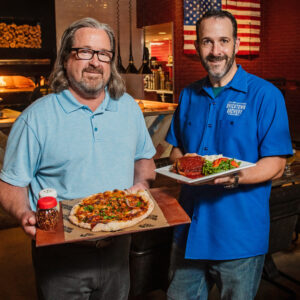 by Laura Beam
Thirty years ago, Bricktown Brewery pioneered the craft beer movement in Oklahoma. Lobbying to make brewing and selling beer legal here, they proudly obtained the first federal license number for craft beer in the state of Oklahoma. Along with that monumental achievement came another – crafting a delicious menu of kicked-up comfort foods that surprise...
Read More  >