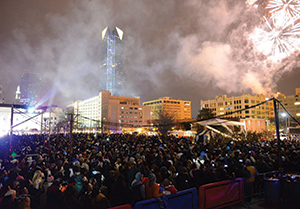 A tradition since 1987, Opening Night is a family-friendly event that features performing arts, children’s activities, street performers, a festive 5K and one of the largest fireworks shows in the state. This year, however, visitors will notice a few new changes that are designed to improve the experience of Opening Night.

“We have five venues across downtown, which include the Downtown Library, the OKC Museum of Art, the Civic Center, City Hall and Bicentennial Park, where the big finale is,” said Christina Foss, Director of Communications, Arts Council Oklahoma City.

“The layout is quite different from in the past. Before, we were more east downtown, but we moved the event west to center it around Bicentennial Park. There will be less walking distance in the cold, and everything is next to the park where the big countdown will happen.”

New Year’s Eve in downtown Oklahoma City will begin with a festive run, the Finale 5K. In it’s third year, the run winds through downtown and over the Skybridge.

“We will have entertainment all along the route,” Foss said. “We will also have original artwork as the awards. The