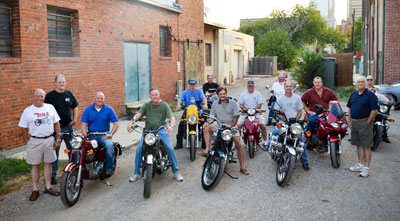 As a young man — barely a teenager — Jerry Martin was fascinated by motorcycles and the life of a man on a bike. It seems as though every young man in the 1960s held that fascination. It was the decade of bike gangs and the open road, and even young men from Holdenville were caught up in the rumbling allure of the iron horse. “I was like the rest of them. I loved motorcycles,” Martin said. “I had a small one in junior high. It was a small Honda. It wasn’t fast, but it was loud. It wasn’t a Triumph or anything. The street thugs rode the Triumphs. They were the outlaws. In Holdenville, it didn’t take much to be an outlaw.”

In the large banquet room of the Bricktown Crabshack, these outlaws and motorcycle boys gathered to talk about vintage motorcycles, about future rides and about the past. Much like the kick-start bikes of old, the vintage bikes built before 1975, these bikers have a bit of old iron in them, too.

The majority of the members of the “Blimeys, Limeys and a Hog or Two” (BLHOT) motorcycle club are older than 60. The youngest member is a rare 26-year-old and the oldest member, “Buzz” Forsythe, of Edmond, is 90. With $30,000 knee replacements kick-starting classic European vintage cycles, age doesn’t matter on the open road with a roaring engine underneath you. BLHOT members — like the vintage iron — are tough and stand the test of time. “Mostly, our main purpose is to show up with these vintage bikes and have occasional rides,” said Tom Keith, a member since 1988.

BLHOT began in late 1985. Martin moved to Moore in 1982 and at the time, he owned the outlaw’s Triumph Norton, but fatherhood made him give up the lifestyle… for about a year. “I bought another bike, and I knew a bunch of guys who had some old bikes, so I thought we’d see about doing a meet. We just printed up some flyers and met at Woodson Park in 1985,” Martin recalls.

About 60 motorcycles showed up at that first event, and Bill Decker, another founding member of the club, said everyone got to talking about old motorcycles — which were for sale and who could work on them. “I had a motorcycle for sale at the time,” Decker said. “We actually began the club in my driveway.”

BLHOT never looked back as membership continued to grow. But without a name, the motorcycle club was a little lost. “We chose BLHOT, which stands for ‘Blimey Limeys and a Hog or Two,’” Decker said. “But we welcome all bikes now.”

All the members have their stories. Lyle Henry, of Oklahoma City, owns a collection of older vintage bikes, and when he takes his strawberry-blond hair (now with more gray than strawberry) out of its ponytail, you can see the wild youth show through. “I rode bikes in high school for the excitement of it and to impress women,” he said. “But then I had an accident and a couple of kids, and I gave it up for 30 years. On my 60th birthday, I bought a bike that was the same age as me. Riding old bikes is much different than new bikes. You have foot clutches and suicide switches and they’re kick-start. I have bikes that are even older than me.”

Forsythe is still a bit of a legend and hero to the current members. Every now and then, a “funny Buzz” story will pop up; like that time he got sick and tired of all the cars speeding down 15th Street in Edmond where he lived.

“So he got so mad at people speeding down the street, he pulls his black BMW (motorcycle) out by the sideway and starts pointing a hairdryer at cars on the road. He’s got this old WWII leather helmet on, trying to scare people into thinking he’s a cop,” said Larry Wallace, a white-haired spitfire of a man with no shortage of words or stories. “So the cops come by and — BAM — they hit their lights… and give him a thumbs-up.”

Forsythe doesn’t ride as much anymore, but he does still own a vintage BMW with a sidecar. He had to get the sidecar when his bike fell over on him in the garage a few years ago. After honking the horn repeatedly, his wife found him and insisted he give up riding. The sidecar was the compromise.

Age and old bikes aren’t for the weak. Neither is easy to handle, but both can sure be fun. Since that first meet-up in 1985, the club has continuously shown its “old iron” at the Jeff Williams Classic Car and Motorcycle Show. The members are also staunch supporters of the Seaba Station Motorcycle Museum in Warwick. “Last September, 13 of us riding ‘old iron’ rode from Baxter Springs, Kansas to Texas on old Route 66,” Wallace said. “The oldest bike was a 1959 BSA and the newest was a 1975 Suzuki. We rode 424 miles.”

If age is any indication, vintage will continue to live on in both the riders and the bikes. Creaky parts and creaky knees can’t hold back a passion for the open road. “We’ve lost a few members to the Grim Reaper, but we enjoy riding together. We all just ride at the same pace these days — a little slower, though some people ride faster than they should,” Keith said, with a pointed look at Wallace who turns 67 in August. “Riding a motorcycle isn’t like a car. It takes skill, and sometimes that skill can decline with age.”

Members like 61-year-old James Shearer plan to never stop riding. With his massive collection of vintage motorcycles — ranging from P 50s Hondas, BMW K-1100 RS, 1978 CB 750S and 1963 305 Dream — he said he’ll choose riding with BLHOT over riding in a car any day. “I hope to ride until I die,” Shearer said. 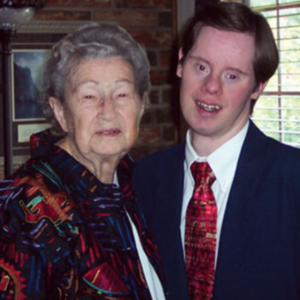 by Louise Tucker Jones
I never knew my mother was uncomfortable around people with disabilities. I was exposed to individuals with special needs at an early age. A young boy who...
Read More  > 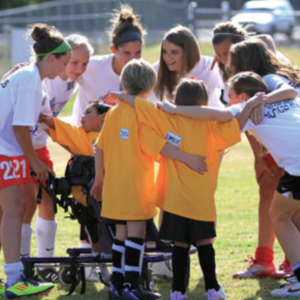 by Christy Shuler
With summer here, Edmond kids are moving outdoors, with sports providing endless hours of fun and critical exercise. While at one time some children might have been limited in their ability to participate in these sports...
Read More  >