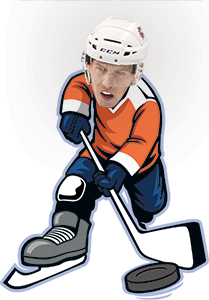 Matt Donovan makes it look easy.
He moves smoothly and effortlessly across the ice, gracefully stripping the
puck from his opponents—or checking them into the boards.

The 23-year-old Edmond native,
now a defenseman for the New York Islanders, is the only professional hockey
player raised and trained in Oklahoma. It was Donovan’s father who inspired his
love of hockey. Larry Donovan owns the Oklahoma City’s Blazers Ice Centre, home
of the Oklahoma City Oil Kings, a youth team not unlike the ones Donovan grew
up with. Larry grew up playing hockey in Boston and passed the love of the game
straight to the next generation. Donovan credits his father for pushing him on
the rink, yet never so hard that it became more of a chore than a game.

“My father has run ice rinks in Oklahoma City
my entire life,” says Donovan, “That’s how I got started in hockey. Even as a
baby, I was a rink rat. Whether it was hanging out at public skate or
practicing on the ice by myself, I was always doing something related to hockey
while my dad was working.”