“Awww!” It’s something you can’t help but squeal when you see baby animals, especially when at the zoo. Fuzzy chicks, playful elephants, even tiny turtles soften people’s hearts. Every birth that occurs at the Oklahoma City Zoo is extra cause for celebration, because many of the animals are so rare.

“Every zoo birth is exciting,” said Candice Rennels, public relations manager. “It’s such a happy occasion when an endangered species is born because our animals are great ambassadors for their relatives in the wild.” 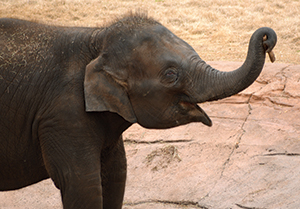 The most famous zoo baby is Malee the elephant. Her birth in 2011 was historic—the first elephant baby for Oklahoma City! The community fell in love with her, and visitor traffic increased by 150,000 people during her first few months. In December, she was joined by a sibling.

This elephant cuteness has generated excitement since 2009 when their mother Asha, one of the Zoo’s adult female Asian elephants, began breeding. The public was apprised every step along the way, following Asha through her two-year pregnancy with Malee and her second calf due before the New Year.

“An elephant birth is a significant event for our community. There is a strong connection between Oklahomans and our elephants,” Rennels said. 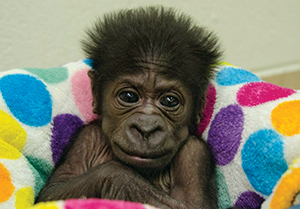 Zoo babies have a large following, and people will follow their life stories for generations. The recent birth of a baby gorilla, Kamina, made international news when she went to the Cincinnati Zoo to be raised by a surrogate mother. Oklahoma City staff knew that Kamina would not do well with her birth mother, so a different gorilla troop was a better option.

Oklahoma City, on the other hand, has earned the reputation as a surrogate zoo for chimpanzees. Recently, two different baby chimps were “adopted” and are now successfully living with their new troop.

The zoo added another surrogate success to its list in November when an African Wild Dog had three puppies. The inexperienced mother showed lack of maternal care, so the staff removed the pups and arranged for a lactating domestic dog to feed and care for these genetically important pups. Lilly, a golden retriever from Kansas raised the three pups right along with one of her own until they all were weaned. 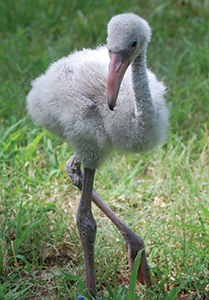 Beyond the famous babies, the zoo is host to all sorts of animal younglings. Raising a flock of flamingo chicks is a bi-annual project for the zoo’s bird keepers. Flamingo eggs are gathered up and incubated, and then the fluffy hatchlings are cared for until spring, when they are integrated into the flock. In this case, because of our native rat snake population our best option for our flamingos is to pull their eggs and hand-raise chicks.

“We take the flamingo chicks on daily walks for exercise,” said curator Darcy Henthorn. “It’s intense work, but one of the coolest avian programs we participate in.”

Baby lorikeets are also hand-raised, but for a different reason—they live in an exhibit that people walk through. “We’ve learned over time, that by hand-raising lorikeet chicks they become more friendly birds for our guests to feed and interact with,” said Holly Ray, zookeeper.

Because of the zoo’s commitment to conservation, most births are well orchestrated. Breeding decisions for endangered species are made by specialized committees worldwide. Mating partners are determined by the individual’s DNA, current offspring in the gene pool, and whether zoos have room for a future baby. 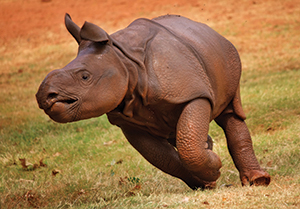 A half-century ago, zoos had a different philosophy about breeding—have as many babies as possible! Why? First, the genuine fear of extinction resulted in a “baby factory” mentality. Second, selling surplus animals, often as pets, was a viable way of making money. Over time, those practices shifted to focus on better care for fewer animals.

“We don’t have indiscriminate breeding anymore,” said Don Whitton, animal records technician. “You’d be surprised how few babies we actually do have during a year.”

Last year, only a handful of reptiles and birds hatched babies, and only a dozen mammals were born. High-profile mammals, like Rupert the baby rhinoceros, generate the most interest. Occasionally a non-mammal baby makes headlines, such as the two Komodo dragon hatchlings who came to the zoo a few years ago. Although they aren’t huge yet—they will be, and visitors enjoy watching them grow.

For the most part, pregnancy is a managed process, and staff members are prepared when a baby arrives. In extreme cases, such as the baby elephant births, fully-trained teams spend the night at the zoo, ready to help with delivery. 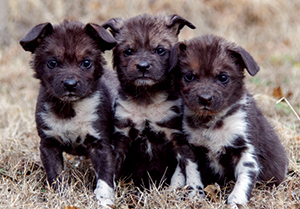 Another change in practice was the elimination of the zoo nursery. Visitors really enjoyed looking through glass windows at rooms full of baby animals, but zoo professionals now advocate that offspring stay with their parents whenever possible. Every endangered species born into a zoo is part of a viable effort to conserve the species for the future.

Technology and social media, such as cameras showing footage online, allows visitors to have the up-close experience they previously had at the nursery window, and news media keep the public informed of animal births. More exciting babies are on the horizon at the Oklahoma City Zoo—and zoo fans will have a front-row seat to view fluffy, hairy, scaly cuteness.

“Zoo babies melt our hearts,” Rennels said. “More importantly, they are the future for endangered species.”

Learn more about the Oklahoma City Zoo at www.okczoo.com. 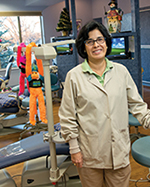 by Amy Dee Stephens
If taking a child to the dentist isn't high on your fun list, then you haven't met Dr. Martha Garzon.
Read More  >

by Morgan Day
At Oklahoma's Home Care Assistance, experienced and compassionate healthcare professionals are dedicated to giving aging seniors the attention and personal care they need in the comfort of their homes, allowing seniors to age in place.
Read More  >