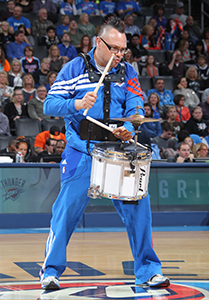 How long have you been a Thunder
Drummer?

This is my sixth season.

What’s your favorite part of
performing with the Thunder?

I love the energy you get in
front of that many people. We also get to interact with a lot of fans, take
pictures with families and let kids play on the drums.

When did you start playing the
drums?

I started in fifth grade in the
Edmond school district. I continued to play all through high school and
college, and have played for multiple bands through the years.

What’s it like to be in front of
all those Thunder fans?

There is an indescribable
adrenaline rush. Playing drums in an arena is completely different than
anywhere else. The sound, the people, it’s unlike anything I’ve experienced.

How has being a part of the
Thunder Drummers impacted your life?

It has given me more success
locally than I would have known. Playing in the local music scene for 20+ years
I had never experienced this kind of success and recognition. It’s great to be
a part of what the Thunder has done for the downtown community. They’ve caused
a renaissance of music that wasn’t there before.

How much time do you spend
practicing for game nights?

We usually have one or two
rehearsals a week, four hours total. We write the routine and then come up with
visuals to accompany. We’ve upgraded to wireless mics so we are able to do
formations that we couldn’t do before. Routines are typically about a minute
long.

Do you ever get recognized on
the street?

I do get recognized a
lot—probably because of my hair! A mohawk is memorable. I have people come up
and say, “You’re that drummer dude!” In the end, it makes me extremely grateful
for what I do. I was even in “Thunderstruck,” the movie, for about four
seconds.

How do you come up with
routines?

All the Thunder Drummers throw
out ideas until everyone finds something they like. The routines are often
based on popular songs. The Thunder doesn’t care how technically good the team
is, nobody dissects the piece. They just want us to play a beat and connect
with the crowd and make them clap their hands more than anything. We also work
with Rumble on beats so he can move to them.

We arrive at least three hours
before each game, set up and sound check everything. If weather permits, we
will go outside of the arena before the game to get the crowd going. Once the
game starts, we go to Section 301 to lead the offense and defense chants.

What do you like to do when you
aren’t drumming for the Thunder?

I have three jobs so I stay pretty busy. Two of
them are music related, so I’m very lucky that way. 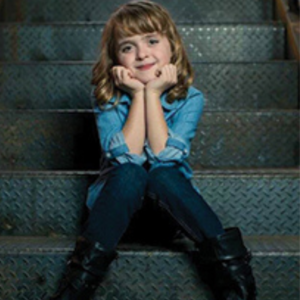 Baby’s Got the Blues

by Heide Brandes
Little Olivia is a ten-year-old with a voice for all ages.
Read More  > 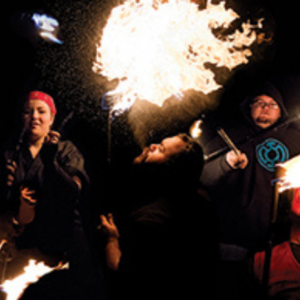 by Heide Brandes
A family that flames together, stays together.
Read More  >