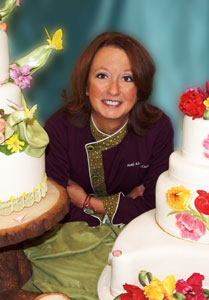 What made you decide to make the leap from lawyer to decorator?

It was a total accident. I always loved to bake. My mom and grandmother
were great bakers. I took a cake class to make a birthday cake and next thing
I know, I was working as a cake decorator during a six month hiatus from
working for the state and never went back!

What famous people have you decorated cakes for?

I was honored to do wedding cakes for several Governor’s daughters and
for Toby Keith’s daughter. I’ve done cakes for NFL and NBA families,
pro golfers and horse racing folks.

A year after opening Ruth’s Sweete Justice Bakery, you were
diagnosed with chronic myeloid leukemia. Tell us about that.

Finding out you have an incurable, untreatable form of cancer
can stop you in your tracks. When I was diagnosed, I was given
two to five years. But six weeks after the diagnosis, the FDA
approved the first real treatment for CML. I was the first
person in OK to start Gleevec. Within a year, my bone marrow
was clean. A couple years later, I was in cytogenetic remission.
After 10 and a half years on the drug, my body was building
resistance so I recently switched to Sprycel, the second
generation drug for CML.

And now you dedicate a tremendous amount of time and
effort to raise money and awareness for cancer research?

Yes – I turn 50 in April and to celebrate, I’m doing the
Madrid Marathon with Team in Training. I’ll also be doing the
Anchorage, Nike and Dublin Marathons and hopefully the
Redman Half Iron Man Triathlon this year, to raise money for
the Leukemia & Lymphoma Society. My life was saved
because of a $500,000 grant from the LLS. I believe it’s
important that I work to finance someone else’s miracle.

You are one of only 22 certified master sugar artists in
the world! How does one qualify for such an honor?

You have eight hours to do a three tier cake, single tier cake
and a non-cake sugar display. Those pieces must show eight
different advanced techniques and you must score very high on
every aspect. About 20 people attempt the test each year. Only
a few pass. It’s no cakewalk!

Yes, I was the lead on WE TV’s Wedding Cake Wars and we won.
I assisted Pat Jacoby on TLC’s Ultimate Cake Off and we won both
times. And I was also on three specials filmed for the Food Network
on the Oklahoma State Sugar Art Show.

While I miss my customers and employees, I believe that I’m meant
to be an instructor. I love the sugar arts and want the new generation
to learn the old techniques. It is incredibly rewarding to travel and
teach others.