My Edmond Outlook: Rumble the Bison 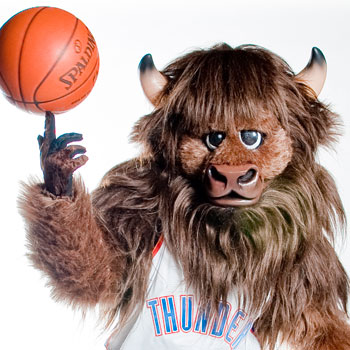 Have you had a lot of free time this season?
The off-season didn’t change my schedule much. I already work year
round doing events and appearances. From birthday parties to bar
mitzvahs, trade shows to school shows. You name it, I’ve done it.

Married, single or just grazing?
I feel like I’m married to the job…and it’s a great marriage! I
might start grazing later on if things slow down a bit, but there
is no time right now.

What conditioner do you use to get that shiny coat?
Any other grooming tips for hairy guys or bovine-types?
Luckily I’m blessed with a natural shine…no conditioner needed.
My only grooming tip is to stay fresh. People might say they like
the beast in you, but they don’t want to smell it!

Is it safe to say you’re a vegetarian?
Actually, after I was struck by lightning (feel free to read my
back story), I developed a more human-like appetite.

What makes Thunder fans the best NBA fans anywhere?
I’ve performed at many NBA arenas and can speak to this with firsthand
knowledge. Thunder fans have a positive and uplifting energy. Instead of using
their cheering power for negative feelings towards the opposing team, they
energize and motivate our team. As a team we do NOT take this for granted.

Bison burgers? Do you have an opinion either way on those?
As the Famous San Diego Chicken says “If you can’t beat ’em, eat ’em!”
Helps eliminate my competition.

Have you made any major TV appearances since the Ellen Show?
I’ve been featured in many FOX Sports, ESPN and TNT segments. I’ve been on
commercials, billboards and even video games, but it’s going to be tough to top
The Ellen Show. The day I was on-set they were also shooting the Lady GaGa
episode. It was crazy!

Is there a special union or club for NBA mascots?
The NBA mascots have an unofficial group. Some might call it a ‘fur-turnity.’ I rarely
go a week without tweeting (@rumblethebison), facebooking (rumblethebison)
or emailing other NBA mascots. There are only 30 of us in the world that do what
we do. Every summer we get together and have a conference to discuss skits,
stunts and creative ideas. We also vote on a number of awards like Mascot of the
Year, Skit of the Year and Stunt of the Year among others. I had the honor of
winning Mascot of the Year my first season in 2008. It was a humbling time to
get such an award that is voted on by your peers. I’ll never forget that.

Some say you talked Harden into a beard. Is that true?
I cannot confirm or deny that claim. It looks pretty good though, don’t you think?

Favorite activity after the game?
Games are quite exhausting. It usually takes me an hour to pack up and shower
after a game. By that time, I’m ready for some nachos and some sleep. Yes, I
have a weird craving for nachos after every game. The trainer says it might be
from a lack of salt…I tend to sweat a little during games.