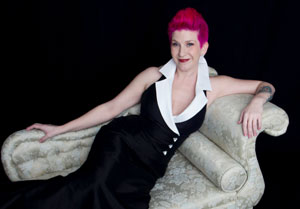 Name: Renee Anderson, Voice Instructor, Performer
Did you grow up in Edmond?
Yes I did. I’m an original Edmond Bulldog!
When did you start performing?
At the age of seven, I auditioned and was cast in my first musical. I played Gretl in “The Sound of Music” at Oklahoma Christian University. I’ve been hooked ever since.
You’ve starred in many different productions over the years. What have been some of your favorites and why?
Playing opposite Jonathan Beck Reed as Delilah Strict in Zombie Prom at OKC CityRep – sharing the stage with Jonathan is an actor’s dream come true!
Matthew Alvin Brown asking me to play Yitzhak in Hedwig and the Angry Inch – being a part of that show was life-changing. But my absolute favorite? Watching the sheer excitement and joy of the audience as I flew through the nursery window as Peter Pan at The Pollard Theatre in Guthrie. That was truely magical.
How long have you had pink hair?
Only about six years. My stylist Cherlyn has been doing my hair for 18 years and she ROCKS! She’s always done something radical with my hair, whether it’s the cut or color. We found that the pink stays longer. I feel naked when my hair is not pink. It’s become a part of me.
You once worked on a cruise ship. What was that like?
I performed on a smaller cruise ship out of Florida. I’m glad I had the opportunity and experience, but can say now that it’s not really my cup of tea. If you enjoy living in a shoebox that floats on the ocean, then I highly recommend it.
How long have you been teaching voice lessons?
I just finished my 6th year of teaching private voice. I teach a couple of days at the Lyric Theatre Thelma Gaylord Academy in Oklahoma City and the rest of the week at Upstage Theatre in Edmond. I absolutely LOVE it!
You’re also involved in a lot of charity work?
Whether it’s shaving off all my pink hair or lending my voice to raise awareness or money, I do my best to be there and help. I am very passionate about keeping the arts in education. I believe it is vital!
If you could star in any role or play what would it be?

I would love to play Eva Peron in Evita one day.

Your resume boasts high-pitched barking as a special skill?
It got your attention didn’t it? It’s been a great conversation starter at auditions.
What inspires you most?

risks and continuing to see it grow.
Renee will be performing in “Anything Goes” at UCO in July for
Edmond Summerstock. To purchase tickets visit, summerstockok.com.
Share this Story 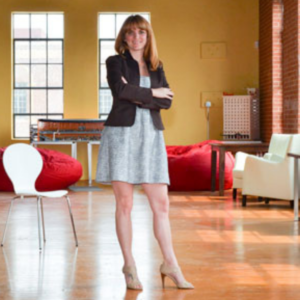 by Heide Brandes
Ashley Amend poured everything into her tech startup business, one which created touch screen programs for kiosks. But when her business started struggling, she knew she had to start anew. Amend was ready for a change and a break from the business world; she was ready for something different. But for Amend, different meant extreme....
Read More  >