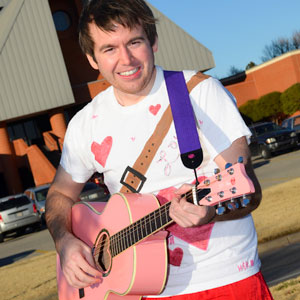 This is your 6th year serenading people for charity.
Do you write the songs or do people get to pick what you sing?
I write a new song every year. That way I don’t have to learn a kajillion
songs and if I have repeat customers they get to hear a new song.

How does someone get started in this endeavor?
I’m not really sure…for me, I just had an idea in high school that dressing up as
cupid and serenading people would be a great way to make money. That first
year I ended up making $600 which was awesome. The next year, I was a
freshman at OC and had a lot of friends raising money for their summer
mission trips, so I thought it’d be cool to do it again and give the
money away. And it’s worked that way ever since.

What charity are you supporting this year?
Well, the songs are $20 a piece and the majority of the money
will go to a charity called Give a Goat. It’s a non-profit that
gives goats to needy families in the Philippines. Then I’ll
give money to OC students raising money for mission trips.

How do people normally react? Any funny stories?
The typical reaction is always embarrassment. I probably
sing to just as many men as I do women, and the men are
typically more embarrassed, but the women can get pretty
flustered too. I’ve sang to business men and women, old
couples, kids in school, professors teaching class, etc.
Once I sang to a 7th grade girl during lunch and she was so
embarrassed she just put her head down and never looked
up, even after it was over. And then one year I got a call from
then governor Brad Henry’s wife and she hired me to sing to
him at the capital. He was pretty embarrassed, but took it well.

Do you ever get embarrassed while performing?
I’d say the assignments all have varying degrees of
embarrassment for me, but I’ve done it so much now that
I know no shame. I’m only uncomfortable when I sing to
people around my age, but anyone older or younger
I don’t even think about it. It’s just  a lot of fun.

How many of your performances are truly about love?
Most of them are goofs laced with love. A lot of wives send them
to their husbands and vice versa as a teasing “I love you,” but sometimes
I’ll get lucky and get to sing to a cute older couple who just want to have me
sing to them. Every year there’s a man – in his 60’s probably – who has me come
sing to his wife and she always gets tickled and then gets tears in her eyes.
It’s the sweetest thing.

Have you ever turned anyone down?
Only a couple of times, but that’s just because they were too far away and there
was no way to make it work in the schedule. One was in Weatherford and the
other in Florida. (haha, I have no idea what that guy was thinking.)

How can people get in touch with you to sing for their loved ones?
They can call me at 580-789-0225 or email me at jacob.shuart@gmail.com.