Mimi and Cleo are both 105 years old and live in the same assisted living center. From wartime experiences to musical choices, it’s uncanny how these centenarians have lived such similar lives—even though they have never met. These lovely ladies witnessed moments in time that most of us only read about in history books. Both claim that they’re nothing special, but they are. 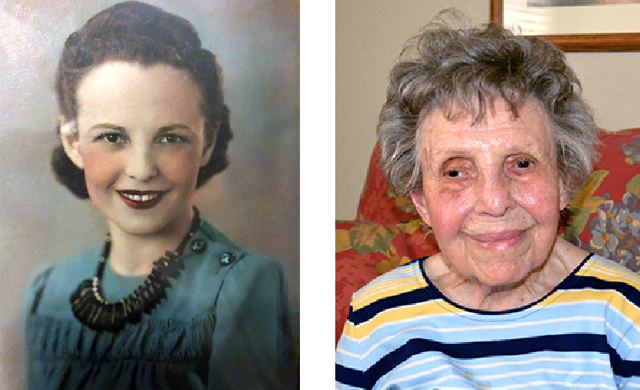 Mimi is adamantly proud of her age. “I’m 105 and a half!” She was born in 1912 in the small town of Milburn, OK. Her father had a beloved ranch, and Mimi grew up riding horses. The family traveled by horse and wagon until they got a Model T Ford, which Mimi learned to drive, under-aged.

Mimi came to Oklahoma City after high school to live with relatives. She worked at a stage theater that hosted vaudeville shows and early movies. She remembers the actors making appearances at the theater, including the western movie star, Buck Jones. The theater was owned by Phillip Isley, whose daughter, Jennifer Jones, became an academy award-winning actress.

Mimi married Charles Couch and they had one daughter, Charlene. Charles’ parents came to Indian Territory during the Land Run. Couch Drive, a street in downtown Oklahoma City, is named for his family. During World War II, Mimi traveled with Charles to Florida, where he was stationed as a marine. Although he was in the U.S., Mimi knew he was always in danger from “spy boats.”

In the 1950s, the couple moved to a house on 50th street in Oklahoma City, where Mimi lived most of her adult life. She remembers swimming at the nearby Belle Isle Amusement Park and eating at the Charcoal Oven Drive-In. Her husband opened the first Interurban restaurant in Norman and managed the Sportsman Club. After his passing, Mimi went to work as the floor manager for Pepe’s Mexican Restaurant in Edmond. Mimi’s six grandchildren say that no one baked pumpkin pies like her, and she misses doing that. 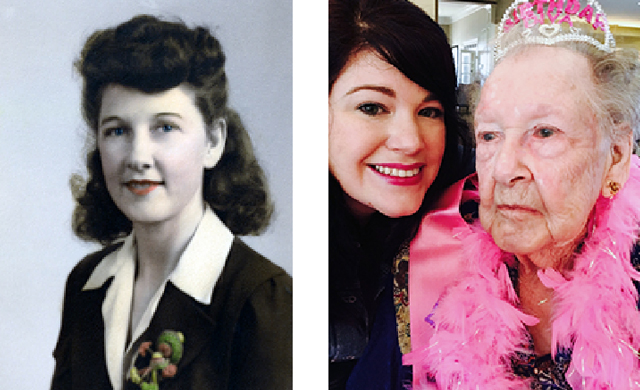 Cleo was born in 1913 in Rosedale, OK. In 1915, the family moved to Ardmore when a railroad tanker accidentally exploded, decimating the town. Since Cleo’s father was a carpenter, he helped rebuild Ardmore.

Cleo married Syl Davenport just before the Great Depression hit. Her father lost everything, but Syl found a job changing truck tires for $5 a week, which barely supported Cleo and their baby daughter, Joyce. In 1939, the family moved to Oklahoma City and bought a house on 50th street, later moving to 19th street.

When Syl entered the Air Force during World War II, Cleo took a job at Tinker Air Force Base. She checked airplane flight panels and replaced any malfunctioning instruments. Whenever Syl flew into Tinker field, Cleo’s boss allowed her time to visit with her husband.

Mimi and Cleo seem to have lived parallel lives. Their small-town roots led them to the same stretch of road in Oklahoma City during their mid-life and then landed them one hallway apart at a local senior living center. They both love Elvis music, although Cleo said, “I didn’t like his gyrations very much, but he had a beautiful voice.” They both have strong memories of the John F. Kennedy assassination.

The staff regularly drops by to chat with Mimi and Cleo during their breaks because they are such sweet souls—but Mimi and Cleo seem baffled as to why people enjoy their company.

“I’m just like everyone else,” Mimi said. “I guess it’s because they can’t believe I’m so old.” Cleo said, “A friend once told me that I’m a special person. I said, ‘No I’m not, I’m just like anybody else.’ I never did find out why she thought that,” Cleo mused.

So what’s their advice for living to 105? “I say thank you to God for my blessings every day, instead of just asking for things,” Mimi said. “Maybe that’s why I’m still here.”

“I haven’t any idea how I made it to 105!” Cleo said. “I guess it’s because I never did smoke, drink or go to bars. We lived a low-key life. We went to church. I would say that you must read the Bible and seek your own salvation. That’s what I did. I never even thought about being this old, but God’s still taking care of me.” She laughed softly. “I wish he’d hurry up and call me home. But then, you’re never ready.”