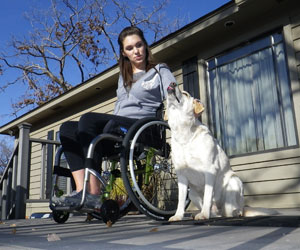 At 22, Mary Beth Davis is just a semester or two away from graduating at Oklahoma State University with a degree in zoology, and like other college seniors, she’s looking at places to intern or a job working with animals in the veterinary field.

She knows she’s graduating behind schedule, but in the past two years, the vivacious brunette has dealt with and overcome more than most people have to in their lifetimes. Her entire world changed in a mere glance down, and in the two years that followed Davis has emerged with an optimistic, never-quit, keep-looking-forward state of mind.

On a bright sunny August day in 2010, Davis glanced down for a second while driving her truck from OSU to her parents’ house north of Edmond. That glance made her truck shift. She overcorrected into the left lane. She overcorrected again into the right lane. Her truck hit the shoulder and, in a space of seconds, flipped three times, and Davis was trapped in the now-crushed cab of her truck, her head bent at an unnatural angle as the C-6 and C-7 vertebrae in her neck broke.

“I remember flipping. I remember all of it,” said Davis. “I just looked down for a split second. I had my seatbelt on, but it was the cab roof that broke my neck. It took them an hour to cut me out, and I just hurt everywhere and my neck was in such a bad position.”

Luckily, a police officer was following close behind Davis when her truck flipped, and she was flown by helicopter to OU Medical Center. “I didn’t realize how bad it was, but they immediately stabilized my neck and later I had surgery. I stayed in ICU for two weeks, and then they moved me to Jim Thorpe South.”

Through the surgeries and the medicine that made Davis sick and sleepy, she was told she would never walk again, that she should learn to live in a wheelchair and change her profession. “I was like, ‘No!’” she said. “When they told me, I freaked out of course. I had anxiety attacks. But my mom and dad were by my side the whole time. My mom was amazing. When something bad happens, she takes control and gets things taken care of.”

Still, doctors told the young woman that
although she would get stronger, she would have to adjust to her new life without the use of her legs. “When I was first injured, I was numb. I couldn’t move my arm and nothing below my chest. But being positive helped,” she said. “My core strength was really weak and that’s what I work on.”

Two years later, and through hundreds of hours of physical therapy, Davis’ core strength is stronger. She owns a car equipped to allow her to drive. In the months following her release from the hospital, she continued to work on upper body strength, dexterity and had to relearn basic life skills like dressing on her own, cooking and other activities.

She had to learn to navigate a wheelchair, and she had to get used to people staring. Missing just one semester of college, she returned to OSU spring of 2011. “I really got strong then, pushing my chair all over campus. I got tired a lot, but I started physical training at the gym with a trainer. It was new for him, training someone in a wheelchair, but going back to school opened up so much more — it gave me more strength and independence,” she said.

The dark days are still there, too. Some days, the frustration is overwhelming; so is the idea of never walking again. “You just get so frustrated that you want to quit, but you deal with it, cry and let it out,” Davis said.

But hope remains. In June, Davis took part in Project Walk, an innovative and intensive physical therapy camp in Carlsbad, California, that specializes in spinal cord injuries. In a gym setting, Project Hope participants work on stretching, range of motion and movement. “You stand. They never want you in your chair. If you can’t stand, then you crawl, kneel or use a walker,” Davis said. “I was exhausted the second day. By the second and third week, I was so tired, but you realize you can do more than what you thought you could. I can do a little movement in my glutes. My hip flexors were trying to move.”

But it was getting the car that really gave Davis a sense of normalcy. The vehicle allows Davis to push a hand pedal to brake and for speeding up. She didn’t want a wheelchair ramp, so she had to learn how to get into the car, and then pull her wheelchair in after her. “I finally learned how to get in and out of it, but the car has scratches all over,” she laughed. “Having a car gives me so much independence. It took about a month of training with my instructor to learn to drive it, but he was so much fun.”

Davis is still trying out different therapies with the hopes of eventually walking again, like the Ekso bionic suit, which essentially walks for a person. “It does 100 percent of the walking, but you have to work on balance. It’s a strange feeling,” she said.

However, the suit stays at Jim Thorpe Rehabilitation Center, and frankly, Davis said, it’s faster and easier to get around in her wheelchair. “Next year, they will have the bionics ready for home use, but it’s insanely expensive,” Davis said. “It won’t replace the wheelchair. You can rent it if you want to go to a nice event or something, but I get around so much quicker in the chair.”

She also owns an FES bike, which uses electrodes to stimulate her leg muscles to push the pedals. Movement — even with paralysis — is important to maintain bone density health. “I love it. It’s pretty cool,” she said. “I want to walk again, but I’ve come to the point that walking isn’t everything. If I never walk again, it’s not a big deal. It may be the ultimate goal, but if it doesn’t happen, it’s OK. I’m still going to be happy and I’m still going to be a veterinarian.”

Above all, Davis said life without use of her legs is still life. Her faith in God keeps her strong, as does her family’s support. “Depression gets you nowhere. In fact, I feel like there’s us disabled people who are fully capable and then there’s able-bodied people, and the able-bodied people don’t realize that life isn’t over for us. We’re still the same people. We’ll still have good days, bad days, get married, have children. Stop. I’m fine!”

Davis also counsels other recent spinal cord patients at Jim Thorpe. “This happened for a reason and that’s reason to keep going. This isn’t the path I thought my life would take, but a lot of good has come out of it,” Davis said. “I’ve helped a lot of other people. I go talk to new patients who have spinal cord injuries and I help them too. Life goes on.” 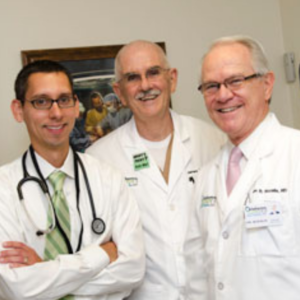 by Linda Treadway
The fall allergy season is almost upon Oklahoma, and that means the Oklahoma Allergy & Asthma Clinic (OAAC) is ready to help allergy-sufferers find relief with its high-tech facilities and highly-trained physicians.
Read More  > 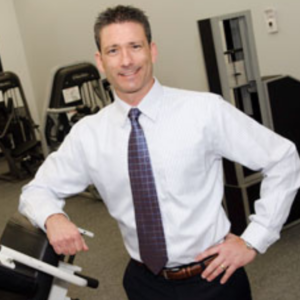