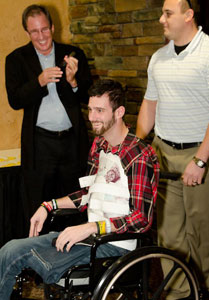 Tyler’s experience is one you’d expect to see in a movie and at the same time, every mother’s nightmare. A simple trip to the grocery store ended with an accident that would change his life forever. But it was his incredible character that would move all who heard about the tragic turn of events for this Good Samaritan.

On the evening of November 9, 2011, 24-year-old Edmond resident Tyler Ryan was on his way to Crest Foods when he spotted a couple with a child on the side of the road near 15th Street and Santa Fe. Their tire was completely shredded. A valet of six years at Remington Park, Tyler knew his way around a car and jumped in to help.

“It didn’t surprise me that he was helping someone,” says Jay Mills, owner of Jay’s Valet, the company for which Tyler was employed. “He’s the kind of kid who would ask, ‘What can I do to help?’

With hazard lights on and other safety precautions taken, Tyler began changing the tire. As he was retrieving a spare from the couple’s trunk, the unthinkable happened. A driver, who would later be described by police as inattentive, slammed into Tyler, sandwiching him between the two cars and crushing the lower half of his body.

People at the site rushed to his aid, finally releasing him from the grip of the cars. Tyler was just coherent enough to give out his mother’s phone number. A nearby resident and UCO coach quickly stepped in to wrap a belt around his leg in an effort to stop the bleeding.

The injuries Tyler suffered were severe. The bones in his legs were broken along with three vertebrae in his lower back. He had a number of contusions and lacerations on his body as well as damage to his head. The work done to repair Tyler’s broken body would take weeks along with nine separate surgeries. He was given staples in his head as well as two rods and eight screws in his right leg. Unfortunately, the damage to his left leg was so severe that it had to be amputated from the knee down.

As if in a domino effect of bad news, Tyler did not have medical insurance. In total, his medical bills came to more than $700,000, a figure that was relatively untouched by the inattentive driver’s insurance.

Despite the immeasurable difficulty of his situation, Tyler remained in good spirits. During his hospital stay he was visited by family, friends, well-wishers and the family he had stopped to help. Tyler immediately turned the attention to them. “The first thing Tyler said was, ‘How are you all? How’s your car?’” said his mother, Shirley Coleman.

While most people might let this sort of life-changing event darken their spirits, Tyler has been an inspiration to those around him. “Tyler’s always been a positive person,” says close friend Jelena Teh. “And [this experience] hasn’t changed that.”

It is this outlook that has brought the community to rally alongside Tyler, offering hope, encouragement and a number of fundraisers to help cover his medical expenses. One such endeavor is the Keep Moving Forward bracelet, worn by a number of supporters including Denver Bronco Tim Tebow. Tebow wears the bracelet in encouragement of Tyler, before and after every game.

“Keep Moving Forward” has become Tyler’s motto. Coincidentally, the words were inspired by a tattoo he had gotten just nine months prior to the accident. “It was just a motivator, something I could always look at,” he says. He recalls his parents’ “shocked” reaction to the massive image on his entire forearm. Of course, this message would prove both healing and prophetic later during Tyler’s recovery. “We think it’s really cool now. We like it,” says Coleman.

Moving forward is precisely what Tyler has done with the help of his family and friends. On January 5, Jay’s Valet hosted a surprise benefit for him in which they raised $22,500 to put toward Tyler’s medical expenses. It was an emotional evening that included a call with country singer Vince Gill, who offered motivational words. Also at the benefit, Army Maj. Gen. Myles Deering awarded Tyler a Certificate of Excellence and a medal for his courageous efforts and selfless bravery. In addition, Tyler and his family are to receive an expense-paid trip to Challenge Aspen, a summer program designed to help the disabled recognize their true abilities.

As news of Tyler’s heroism spreads, people everywhere continue to be touched by his story. During the Oklahoma City Thunder game on January 25, he was awarded the Devon Community Hero award. Kevin Durant also showed his support by sporting a Keep Moving Forward bracelet the entire evening.

As for his recovery, Tyler says it’s coming along “surprisingly quickly.” On December 12, he took his first steps with the use of a prosthetic leg, his family cheering alongside him. After his release from strength and conditioning therapy December 23, Tyler returned home with his family. He has since done a number of physical therapy sessions, building his strength and adjusting to his new physical condition. As his strength continues to grow, Tyler gets closer to walking again.

However, as Tyler continues to heal there is no foreseeable end to the medical bills increased by his hospital stay, physical therapy and prosthetic leg which will need to be replaced over time. It is the generosity of those who find that willingness to help a stranger in need, like Tyler did, that will get him through. While the future may be uncertain, to Tyler it’s simple. He’ll keep moving forward. And he’ll do it with an immense support team at his side.

To donate to the Tyler Ryan fund, learn more about upcoming fundraisers, or offer words of support, go to www.keep-moving-forward.com or call Jay’s Valet at (888) 368-5297.