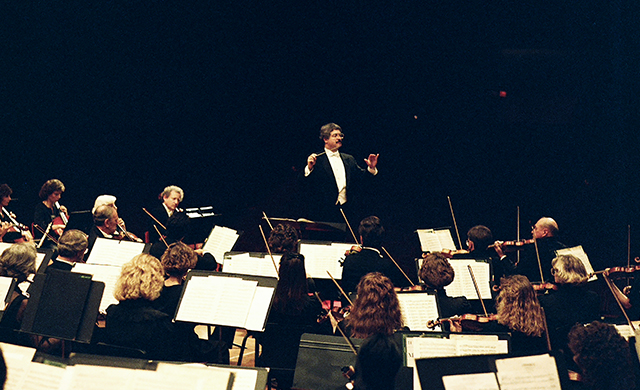 “I can always feel the audience from my dressing room,” said Joel Levine, describing the heightened emotions he experiences right before he conducts the Oklahoma City Philharmonic. “I’m just 30 feet from the stage, and I can feel their expectations for a wonderful evening. That creates a little stress, because performing live is like walking a high wire–but once I walk through the door onto the stage, I suddenly relax. I do! It’s a magic I can’t explain.”

As a child, Joel Levine borrowed the curtain rods from his mother’s window sheers to practice conducting. By college, however, he’d accepted that the career field for conductors was bleak, with only a few select cities able to support an orchestra. “Having grown up in New Jersey, my goal was to direct music for the Tonight Show–but that wasn’t seeming like a safe career choice,” said Levine with a laugh. “So I got an engineering degree.”

When Levine finally admitted that he needed to follow his musical passion, he went back to school and started over. “After all, you only go around once in life,” Levine said. “Fortunately, engineering wasn’t a waste at all, because I interface with recording engineers all the time.”

Despite being a classically-trained conductor, he came to Oklahoma City in 1976 to conduct summer Broadway shows for Lyric Theater, because, “When you’re young, you go where the work is.” In 1979, he was selected as associate director for the prestigious Oklahoma Symphony–just before it folded. The symphony, dating back to 1938, was comprised of full-time musicians that Oklahoma City could no longer afford. After an unsuccessful strike, the symphony closed.

“I found myself in a metropolis of a million people and no orchestra,” Levine said. “By then, I knew many of the local musicians, and I knew we could work with the arts community to put together a new orchestra.” It took another year to pull everything together, but in 1989, Levine directed the first concert of the Oklahoma City Philharmonic.

Now, Levine is preparing to retire from his 42-year musical career. During his tenure, Levine has had the luxury to conduct classics, premier works, Broadway and pop, holiday shows, and guest performances. He also developed the children’s Discovery Series, short concerts themed around topics like animals or pirates to interest children. “My parents took me to museums, the Metropolitan Opera, Rockefeller Center–that’s part of my family tradition,” Levine said. “It’s not a long thought process to rationalize that when your parents take you to hear music, it makes a stronger impression and you’re more likely to love the art form. In the end, I don’t care if children walk out knowing the difference between an oboe and bassoon. My standard for success is did they enjoy it? And will they come back?”

After retirement, Levine intends to come back, too. It’s in his life’s blood. Not only does he plan to voluntarily conduct the annual Christmas concert, he will tackle the backburner project he started in 1994. “I’m going to archive the rich history of Oklahoma City’s symphonies,” Levine said. “I’ve collected programs, photographs and scores dating back to the very first concert in 1938. No one can see them but me right now, because I’ve only had time to ‘hunt and gather’ these items—but I plan to remedy that and get them archived and ready to exhibit.”

“It would be unfair to all the musicians who worked hard to keep the music going all these years to let this history disappear,” said Levine. “Conducting the philharmonic has been a very unusual and special experience. I’ve been the beneficiary of living in this city for 42 years, and I’ve never regretted it.” 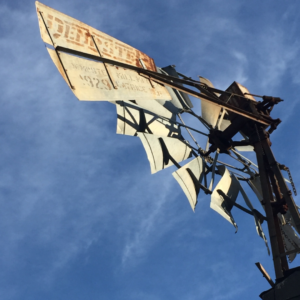 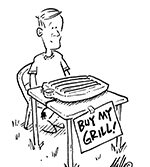 In Other Words with Dave – Buy My Grill

by Dave Miller
I’m having the garage sale to end all garage sales. Over the past month, I’ve gone room to room, closet to closet, uncovering things I don’t use anymore. They say a good rule of thumb is “If you haven’t used it in six months – get rid of it.” What if I haven’t used the...
Read More  >