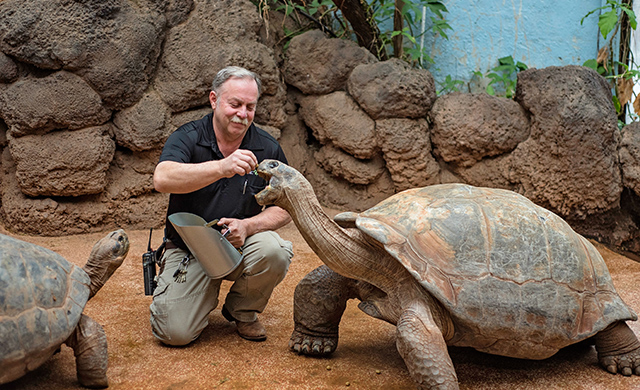 For 30 years, Joe Branham has been a Herpetologist at the Oklahoma City Zoo. Lizards, alligators, and venomous snakes are an everyday part of his job—but there’s nothing routine about caring for the most dangerous animals in the world.

Branham’s been called a “snake whisperer,” but he insists that it’s about observation, not some telepathic connection. Each day, Branham and his employees observe their 400+ reptiles and amphibians to identify their moods and physical needs. “Just because something is venomous doesn’t mean it will hunt you down and bite you,” Branham said. “You have to read an animal’s body language.” As proof of Branham’s skill in observation, he has no dramatic bite stories, a 30-year record of which he is proud.

Branham’s earliest nature experiences occurred in France, where his father was stationed with the Air Force. His neighborhood backed up to a forest which still had bomb craters from the war. “Of course, they told me to stay out of there,” Branham said, “but those craters would accumulate water, and amphibians would go there to reproduce. Guess where I was every day?”

His childhood observations would eventually lead to his ground-breaking success as the first Herpetologist in the world to breed black tree monitors and to successfully hatch Gila monsters. Following this breakthrough in the 1990s, National Geographic filmed an entire episode about Branham.

Branham is also a successful trainer. At home, he trains horses; at work, he’s trained sea lions, elephants, an anaconda, and he once trained nine alligators to move to their separate locations on cue. “As part of a misspent youth, I trained dogs for the police department. By “trained,” I mean I was the guy in the suit that got bit.” Branham laughed.

During Branham’s youth, he bred and traded snakes as a hobby. His self-taught knowledge gave him expert status at a time when herpetology was still in the “dark ages.”

“I like unlocking mysteries—and there were lots of mysteries back then,” Branham said. “Herpetologists had no communication with each other until the 1990s. The internet allowed us to exchange information, so there was a learning boom.”

One of Branham’s most dramatic moments occurred in the 1980s when a king cobra needed medical attention. The use of shift boxes and snake tubes hadn’t been invented yet, so capturing the snake by hand was the only known option. Branham and a trusted co-worker devised a plan to remove the cobra from its habitat, which had two 2’x2’ft access doors.

“I called my wife and said, ‘If I’m not home for dinner, I won’t be home.’ Then, we sneak-attacked the snake. Without warning, we each threw open a door and jumped inside with our shields. I grabbed the head and he held the body, but I was squatted down and I had to step out onto a ladder to get out. I couldn’t find it with my foot, so I grabbed the door frame with one hand to get my balance.”

“When I took one hand off that snake’s head, his eyes went straight to my knee. He started stretching his mouth open with all his might. I was holding on, shaking like crazy to keep him back–but he was winning, so I grabbed him back with my second hand. My boss reached through and placed my foot on the ladder, and we exited. That brief moment of struggling for position with a cobra—now that was scary.”

Not your typical work story! Being a Herpetologist has provided Branham a lifetime of interesting experiences. He’s directly responsible for many of the industry’s improved methods for managing reptiles, especially venomous ones–but for Branham, it’s all a result of simply admiring and observing animals.

To learn more go to www.okczoo.org