IT’S ALL IN THE HIPS 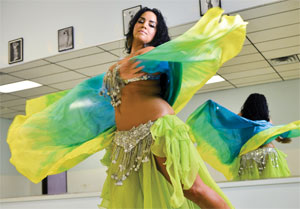 It’s a Tuesday night, and women are undulating to the snaky and mournful sounds of ouds, the reedy flutelike whistle of the double mijwiz and the staccato heartbeat of the doumbek drums.

Lamees Amar leads the intermediate class of belly dance students at the AALIM Dance Academy, Oklahoma’s only nonprofit professional belly dancing school. She looks like a veiled dancer, with skin the color of creamed coffee, hair that spills down her back in black spirals and hips that women around the world would envy.

At night, she is a part of Oklahoma City and Edmond’s alluring belly dance world, a world of learning to move snakelike and performing in restaurants full of the smell of spice and hookah. By day, she is Edmond resident Evelyn Shropshire. “I saw a belly dance show at the State Fair nine years ago, and I received a free lesson coupon,” said Shropshire. “I initially started it as a fun and physical activity for me to do with my 7-year-old daughter. I, of course, fell in love with it and never quit.”

Now, not only does she perform in restaurants, hookah bars and for birthday parties throughout the state, she also teaches other women the ancient art form. From shimmying hips to slow and oozy hip circles to full-body undulations, more women in central oklahoma are attracted to a dance that was created by women for women.

The AALIM Dance Academy Inc. is operated and owned by Soraya Al Musri, also known as Diane Chope, of Oklahoma City. She has operated belly dance studios for 30 years, and AALIM first opened its doors in Edmond in 1997, Al Musri said. In fact, after moving from St. Louis and Wichita, where she also operated belly dance studios, her first three studios in Oklahoma were in Edmond.

“I began teaching in Wichita in 1983 and I moved to Edmond in 1998. The first studio was at Santa Fe and 15th, and then at Broadway and 33rd, and then at 15th and Kelly,” Al Musri said. “Edmond ladies responded favorably enough that we had to keep changing to find bigger space. We had over 50 students, so eventually moved to 23rd and Meridian, and expanded to 250 students within one year.”

The growing popularity of the AALIM Dance Academy was due, Al Musri said, to the fact that all women can learn the art and benefit from it. “It is great exercise and a fun activity to engage in and share with family and friends,” she said. “The benefits include fitness, self- esteem, gratification of accomplishment in performing and continuing to be part of a great art form.”

Shropshire said the fitness and health benefits of the ancient dance were part of the reason she still dances, but that belly dancing gave her so much more. “Physically, it has improved my core muscles, my coordination and my posture. In other ways, it has made me feel beautiful, graceful and feminine,” she said. “It has been a social outlet. I have met so many wonderful strong women whom I love to be around. And naturally, with so many wonderful women, it has been a source of emotional support during tough times, and always an outlet for the stress that life can bring. It is also a creative, artistic outlet that I never even knew I needed.”

For centuries, women have danced to the heartbeat of their soul. Many dancers learn various theories regarding the origins of the dance — that it descended from early Egypt, that it comes from religious dances from ancient temple priestesses or that it was part of traditional birthing practices. One other theory is that the rom (gypsy) migrated out of India and spread the dance form to the rest of the world.

However it began, belly dancing is now a part of the Western world, too. It took hold in America in the early 1900s and women have been falling in love with the sensual art ever since. “The thing I like best about belly dance is that I can lose myself in it. I can do it alone, without a costume, without an audience, without a mirror and I love it just the same as when I put on the glittery costume, the jewelry, the make-up and wow an audience,” Shropshire said. “I can’t imagine my life without it. I love the women, I love the dance, I love the music and you’re never done learning and improving.”

That passion for the dance keeps Shropshire busy in the belly dance world. Besides teaching weekly classes, she’s also a popular performer at places like Goporum Indian Restaurant, Sinbad’s Mediterranean restaurant and Moe’s Hookah Bar in Norman. “Lamees is a very popular and sought-after performer and currently performs regularly at six different restaurant and clubs in the area,” said Al Musri. “She is very knowledgeable and has studied several dance genres which amplifies her performance and teaching qualifications. She is an accredited teacher at AALIM, as are all the AALIM teachers.”

For more information about AALIM Dance Academy or to learn how to belly dance, call 844-0304 or go to www.aalimdanceworld.com. 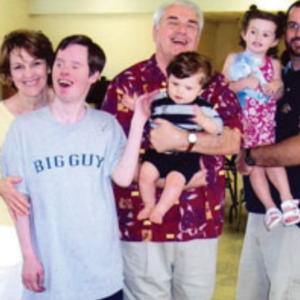 by Louise Tucker Jones
Today, I am celebrating my husband! Hard to believe that a year has passed since I lost the love of my life to pancreatic cancer. I still miss Carl desperately, but today I want you to see the man you never knew through my eyes and my heart. It was our first Christmas together. Being...
Read More  >