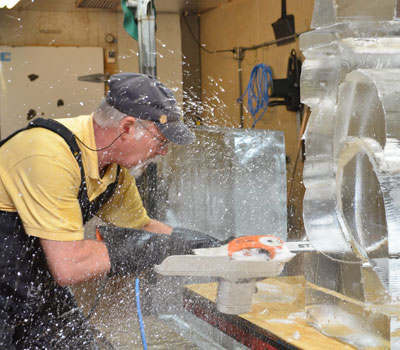 “What do you see when you look in here?” asks chef Ken Burkemper as he stares into a large metal freezer full of water so clear it could have come straight from a spring. The obvious answer is “clear water,” but Burkemper laughs. “That’s what everyone says. I like to joke with them. I tell them I’ll give them $100 if they can touch the bottom.”

With that, the master ice sculptor and owner of Ideas in Ice reaches one hand into the freezing water. It stops halfway down. “That’s ice, see,” he boasts, demonstrating that when ice is made for commercial sculpting purposes, it freezes from the bottom up. There are no ice bubbles, no white streaks, nothing that gives away the fact that half of that freezer is a solid chunk of ice.

For 25 years, Ideas in Ice and its founder have been deep-freezing 300-pound blocks of ice and creating sculptures ranging from wedding hearts and doves to elaborate recreations of the Eiffel Tower, airplanes and everything in between. With clients ranging from brides-to-be to restaurant owners to universities, Burkemper is known for being a master of ice, a cold-sculpting ninja.

Yet, the master never dreamed ice dreams. He dreamt of food. “For me, ice sculpting was part of my culinary training; that’s where I picked it up,” he explains. After training as a Culinary Institute of America apprentice in Kansas City, Burkemper became a regional chef for Gilbert and Robinson and then as the executive chef for Oklahoma City Golf and Country Club. “That’s where I did a lot of food art,” he said.

After opening Down Under Deli in 1989 in Oklahoma City, Burkemper found himself taking on ice sculpting jobs on the side. For 14 years, both the deli and the ice sculpting businesses were booming, and the chef had to decide which business to focus on. “I decided to sell the restaurant and grow this business,” he says.

Nowadays, Ideas in Ice stays relentlessly busy. Every month and holiday bring a new batch of ice ideas. “We do seasonal stuff, corporate logos for corporate parties, baby showers, anniversaries, weddings – you name it,” Burkemper says. “We do a ton of stuff up in Edmond with the colleges and the Boulevard Wedding Chapel.”

Each sculpture in ice starts as a solid 300-pound block of frozen water. Kept at 15 degrees, the ice has to “temper” before a chainsaw cuts into it. Tempering is allowing the ice to warm up and become stable. If it’s hit while in a hard frozen state, the ice will shatter like glass. Burkemper then moves on to other basic hand tools that shave or chip layers of ice off in sprays of snow. Over the years he’s created templates for many of the popular and standard carvings, but he also creates custom pieces of work. With his experience, he can whip out two large ice turkeys in an hour. “It takes me 25 years and 45 minutes to do a sculpture,” he says. “That means I’ve got that 25 years of experience that allows me to sculpt in 45 minutes.”

And this hard work has paid off. He has been honored in ice sculpting competitions and is Oklahoma’s only National Ice Carving Association certified ice sculptor. “We still enjoy what we are doing,” he says. “We get to be a part of people’s best days.” To learn more, call Ideas in Ice at
495-4423 or visit www.ideasinice.com. 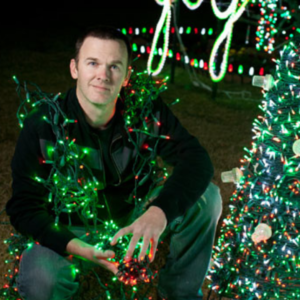 by Krystal Harlow
Name: Brad Stone – IT Sales, Photographer, Musician, Husband, Father and Christmas Light Enthusiast What made you start doing this incredible light show? We have always lit our house in some way but added automation, music, and video last year for the first time....
Read More  >