I Want a Hippopotamus for Christmas

Gayla Peevey never dreamed that her once-famous song, “I Want a Hippopotamus for Christmas,” would experience a boost in popularity sixty years after its recording. Now a new generation, the grandchildren of the original audience, has rediscovered the song, and Gayla is surprised to find herself in the role of celebrity once again.

“I can’t believe the song has been resurrected and is getting more popular every year,” said Gayla (Peevey) Henderson. “I was off living an ordinary life for years and didn’t hear anything about it until about five years ago. Then I started getting media calls from Australia, Ireland and all over the world.” 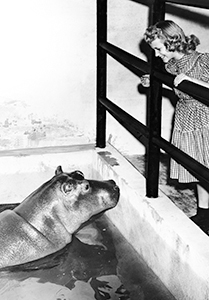 As a child, Gayla was often mistaken for Shirley Temple because of her blonde curls, but it was her unique sound that made her famous. Gayla was a 10-year-old girl living in Oklahoma City when Columbia Records noticed her voice and stage presence on a local television show. They offered her a recording contract in 1953, and her first album landed her a spot on the Ed Sullivan Show. The hippo song shot to the top of the Christmas charts, selling over half a million copies.

At the time, only one other Christmas song, “I Saw Mommy Kissing Santa Clause,” had done so well. It was sung by Jimmy Boyd, another one of Columbia’s handpicked child singers. Gayla and Jimmy performed several songs together and continued their friendship into adulthood.

Unlike Jimmy, Gayla was a one-hit-wonder. Gayla attributes that partly to the fact that the next few songs she recorded “weren’t very good songs” and that her parents lacked the marketing training to further her career. When fans began stalking the house, her parents decided to uproot the family and move to California to live a “normal” life. Gayla raised a family with Cliff, her husband of fifty years, attended church socials and rarely gave her former celebrity life a thought.

Now, new and nostalgic fans are coming back into Gayla’s life. This time, she feels more prepared to face the flurry of publicity that occurs each winter. As a career, she had a creative knack for writing commercial jingles and eventually ran her own advertising agency for 15 years. She also developed a popular website iwantahippopotamusforchristmas.net to document her childhood story.

In December 1953, the Oklahoma City Zoo approached the Peevey family with the idea of granting Gayla’s musical wish—a hippo for Christmas. Zoo Director Julian Frazier felt confident that Oklahoma children would donate their pennies to purchase young Mathilda, a hippo from the Bronx Zoo. By Christmas Eve, Oklahomans had raised the required $3500, so Gayla was at the airport to greet her new present and officially donate Mathilda to the zoo.

“Mathilda was just a baby, so she wasn’t that big,” Gayla remembered. “As a kid, I didn’t grasp the enormity of it all or the major promotions that were going on. Cameras followed me everywhere, and I was getting bags of fan mail—but for me, it was just fun.” 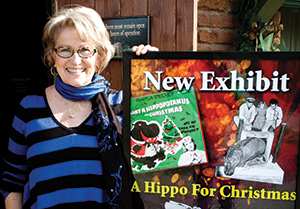 Now it’s fun again! Three years ago, the Oklahoma City Zoo hosted Gayla as their guest of honor to celebrate her significant role in heralding the zoo’s first hippo. Gayla feared that no one would show up, so she was surprised to be treated like a celebrity by a crowd of adoring fans. She led a hippo sing-along, which was so popular that it is now an annual event at the zoo. “It’s surreal to step back into that performing role, because I’ve been a normal person all these years,” Gayla said.

Although she claims normality, few people can boast of a hit song, or the vast hippo collection that has begun to spill out of her house and onto the lawn. Not everyone has a stream with a stone hippo in the backyard. Though she didn’t start the collection, family, friends and fans keep giving her items, so she doesn’t mind finding places to put them.

“It’s rejuvenating to know that people still love the song and remember that I was part of Oklahoma’s history. It’s been a wild ride,” Gayla said. “Looking back, I can honestly say that if you’re going to have a hit song, make it a Christmas song because it comes back every year!”

This year, join the hippo sing-along at the OKC Zoo where Gayla will be joining the crowd via Skype at noon on Saturday, December 7th! 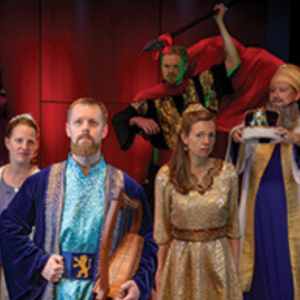 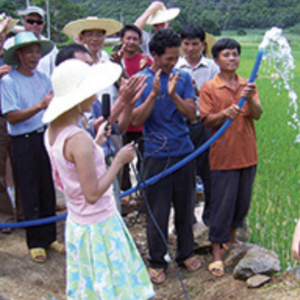