Hounds of the Heartland 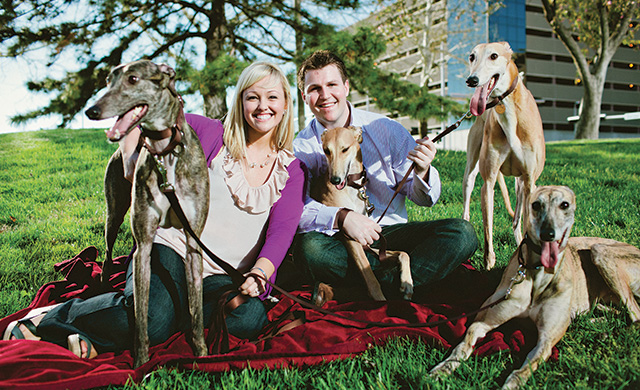 Animals can be just as much a
part of the family as children are, and nobody understands this more than
Edmond resident Emily Adler. She is on the board of directors for Hounds of the
Heartland (HOH), an Oklahoma-based organization that seeks good homes for
retired racing greyhounds. Founded in 2000 by a group of greyhound enthusiasts,
HOH sits under the umbrella of Greyhound Pets of America which has various
chapters around the country.

Adler came upon the group while
researching pet options.  She wanted to
adopt a second dog into her family and after learning more about greyhounds,
she decided that the breed would be the perfect match. After applying for
adoption through HOH, she was matched with Cami, a beautiful brindle female. To
learn more about her new family member Adler read the books suggested by Hounds
of the Heartland and she started going to the weekend question-and-answer
sessions that the HOH regularly hosts. “The show-and-tell events were a great
way to meet the other volunteers and learn more about the breed and how
everything works,” Adler said. “The book about greyhounds was helpful, but I
learned almost everything I know from just listening to Q&A sessions from
other volunteers.”

Fellow Edmond resident Jami
Vrbenec agrees. She and her husband had decided to look into getting a second
dog and were originally planning on spending $1,000 or more on a registered
miniature Schnauzer puppy. But, Vrbenec says, “I’ve always thought greyhounds
were such a beautiful, elegant breed, so we decided to pursue them as an
option.  [While] attending a couple of
Hounds of the Heartland show-and-tells, we were able to actually spend time
with the dogs in person, and see how they interacted with our two young
children.”

One of the goals of HOH is to
dispel various myths surrounding greyhounds. “People commonly assume greyhounds
need a ton of exercise and a huge yard to run around in, and that’s totally not
true,” Adler explains. “In fact, greyhounds make wonderful apartment pets as
long as the owner is committed to walking them short distances on a leash a few
times a day.”  She adds, “Another
misconception is that greyhounds are abused on the track and that really
couldn’t be further from the truth. Racing greyhounds may not be raised in the
typical pet environment but they are the healthiest dogs you can find.”

Aside from that, Adler says
there are many reasons greyhounds make great pets.  “The greyhound is a clean dog. Due to their
thin sleek hair, they shed very little and have little to no body odor.” She
adds, “They are raised with hundreds of other dogs so they are generally very
good with other dogs and especially with humans, as they are
well-socialized.  Most of them are
crate-trained when they come to us, therefore they are very easy to
housetrain.” 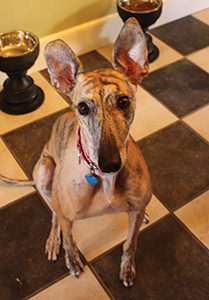 The story ended happily for the
Vrbenec family. “We adopted Stella in August and absolutely fell in love with
her. Wanting Stella to have a greyhound friend, we just adopted Gina a week
ago. Both greyhounds love our kids, and get along very well with our mini
schnauzer,” she says.

It’s easy to tell that Adler’s
passion lies with getting these dogs adopted. There are hundreds of dogs
waiting for homes, but Hounds of the Heartland can only foster six to eight at
a time. What that means, she explains, is that the more dogs HOH can adopt out,
the less time other dogs have to wait for a home.

Typically, the dogs are from 18 months
to 6 years old by the time they are retired. Occasionally, Hounds of the
Heartland gets a younger or older dog, but they are the exceptions, not the
rule. A greyhound’s life expectancy is 12 to 15 years, which, Adler points out,
is a long life for a large dog.

When asked if there’s anything
vital a new greyhound owner should be aware of, she cautions, “The most
important thing to know about owning a greyhound is that it is a sight-hound,
which means they can see clearly up to a half-mile away. They will chase on
instinct, no matter how much you train them, so under no circumstance should
you ever allow a greyhound to be off-leash unless in a fully fenced-in area.”

Adler suggests that “If anyone
is interested in adopting a greyhound, the first step is to read one of our
suggested books: Retired Racing Greyhounds for Dummies by Lee Livingood, or Adopting
the Racing Greyhound by Cynthia Branagan.” Once convinced that a greyhound is
the right breed, an application is available online at greyhoundpetsok.org. HOH
will begin the process of finding the right dog for the new owners. “We are a
very hands-on group and pour a lot of time and effort into placing dogs with
the right family.”

For more information about Hounds
of the Heartland, visit greyhoundpetsok.org.To report a lost or found
greyhound, call 405-613-3138.