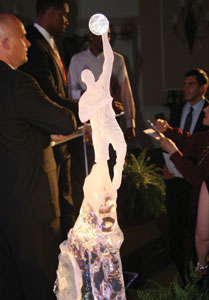 As Edmond sculptor Shan Gray first envisioned a national award to honor the late Tulsan Wayman Tisdale’s NCAA basketball legacy, he knew he wanted to try something truly special. Having already been successful in creating a national sports award in bronze, the Warren Spahn Award, Gray saw an opportunity to sculpt with an ageless quality through the clarity of its colorless medium.
Ohio State’s Jared Sullinger received the inaugural Wayman Tisdale Freshman of the Year Award last year in Oklahoma City. The sculpture was a daring departure from Gray’s normal work…one in which he is finally sharing the full reasoning behind.

“For my first foray into designing and sculpting a modern art award, I chose acrylic, sometimes called optical crystal, because it’s more pure than glass,” Gray said. “After studying many photos of Wayman, I was hoping to allow the shimmer of the acrylic to express the emotion of his smile.”

Gray has more time to appreciate the upcoming second annual Wayman Tisdale Award gala banquet that will be held April 16 at the National Cowboy & Western Heritage Museum in Oklahoma City. “I wanted to get through that first year, get the appraisal back and see how the sports world accepted the award before I disclosed why I was so adamant with the organizers — headed up by Scott Hill — that I be allowed to try this clear medium in this new endeavor,” Gray said. “As an Osage Indian myself, I saw the clear acrylic as a way to leave race out of the equation — to focus more on his smile, as it was what people saw all the time and it tells it all. I worked hard on that smile.”

Scott Hill, executive director of the Oklahoma City-based nonprofit Access Sports, approached Gray to sculpt the award that the U.S. Basketball Writers Association (USBWA) gives to the NCAA’s best freshman.
In 1983, Tisdale was the first college freshman ever named a consensus All-American, going on to be a three-time USBWA All-American and three-time Big Eight Player of the Year at the University of Oklahoma. A gold medal winning 1984 U.S. Olympic basketball team member, he played in the NBA for 12 seasons. He retired to Tulsa in 1997 to focus on his guitar-inspired jazz career and to support many charitable and humanitarian causes, including his foundation.  He was diagnosed with cancer in 2007 and had his right leg amputated above the knee in 2008. He died in May 2009.

The DuPont acrylic ended up costing Gray time and effort well beyond what he would have normally expended during a bronze casting process closer to home. Gray found an artisan near New York City with four decades of experience who also mastered a proprietary process in acrylic fabrication. Gray said he saw aspects within the artisan’s castings that could highlight his sculpture.

When an artist takes advantage of all that this palette holds, it can make the piece a unique and ethereal fine art acrylic sculpture, Gray said. This medium allows the artist to celebrate the manipulation of light through the acrylic’s prism and the interplay of the shadows throughout the light’s distribution in the sculpture.
“This artisan has experimented to create many original artistic aspects for this medium,” Gray said. “His gift to my project was the impact of splitting the design with images inside and out — an image is coming out, while a part remains inside. Also inside, suspended within the acrylic, it says ‘The Wayman Tisdale Award’ where the light gives it a dramatic effect.”

Because this fabrication process was all new to Gray, he said he might have spent too much time learning the ins and outs of acrylic. He made three trips to the artisan’s foundry, learning and watching the fabrication
process. Gray reminded the artisans of the precision needed in keeping the head at an upward tilt and looking inward by 52 degrees from center.

After coming to the attention of his fellow Edmond residents while sculpting and erecting the 19-foot-tall bronze Shannon Miller statue near the Edmond Library, Gray has continued to be well-received by the sports world. His Warren Spahn Award, given to the best left-handed pitcher in Major League Baseball each year, and three larger-than-life bronze statues have garnered him attention as a public artist.
Gray, 55, lives in southeast Edmond with his wife, Melanie. Their 20-year-old daughter, Evan, is in her junior year of year-round study at Dartmouth, playing college softball after an all-state softball pitching career at Santa Fe High School.

Gray began sculpting professionally in 1986 and describes his sculpting style as rooted in the classical tradition. The artist’s creations are almost equally divided between independent and commissioned pieces. He specializes in sculpting the human form, ranging from portrait busts and gallery sculptures to large-scale monuments. The Bronze Horse Foundry of Pawhuska has cast the majority of his pieces in bronze under the supervision of John Free Jr.

This year the USBWA has selected Kentucky forward Anthony Davis as the winner of the 2012 Wayman Tisdale Award. The banquet will also honor legendary Duke head coach Mike Krzyzewski as the recipient of the Wayman Tisdale Humanitarian Award. Coach “K” is the winningest coach in college hoops.

Members of the Downtown Club of Oklahoma City will play host to this year’s event. Access Sports helps honor the award recipient and also funds prosthetic devices for the needy through the Wayman L. Tisdale Foundation and educational scholarships through the USBWA. Tickets and sponsorship information for the April 16 event are available at www.access-sports.net, or by contacting Scott Hill at 749-1515 or scott.hill@access-sports.net.