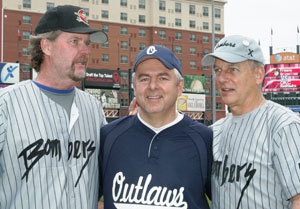 While his television acting career has reached stratospheric heights the past few years, Mark Harmon still brings his celebrity baseball team to Oklahoma to raise money for children’s charities in what has now become an exclusive appearance. Harmon and a baseball team of 14 famous friends will participate in a charity bowling event and admission-free baseball game the weekend of June 1 in Edmond.

Dr. Michael Wright, Edmond spine surgeon and an insider with the group from his days in California, invites the “Bombers” team to participate in a weekend of fun each year in Oklahoma, and they keep coming back.

“Mark (Harmon) and I had no idea what we were starting, but we were part owners in a minor league baseball team, the San Bernardino Spirit, at the time,” said Barry Axelrod, Harmon’s agent, former roommate and Bombers co-founder. Harmon worked with the club, which figured prominently in his 1988 film “Stealing Home.”

Harmon and Axelrod were asked by baseball league officials to put together a celebrity game as a fundraiser. “Mark and I called our buddies that first time and it was a moderate success,” said Axelrod. “We were then invited to other places, and 24 years later, it has turned into this.”

When Wright lived in San Bernardino, he and a group of doctors played against Harmon’s charity team, the Bombers. Wright then served as assistant professor of orthopedic surgery at Loma Linda University School of Medicine and as the team physician for the San Diego Padres. After moving to Oklahoma City in 1998 to join Oklahoma Sports Science and Orthopedics (OSSO), he would fly himself and several teammates back to California for competition.

“Michael asked if the Bombers would consider playing a game in Oklahoma City,” Axelrod said. “It took a few years to get this event off the ground, but Michael’s assistants worked hard to get it going.”

Harmon has told Wright that he will keep coming back as long as he is invited, and the team’s participation has become exclusive. After raising more than $1 million for the Children’s Center in Bethany during the first eight years, Oklahoma City is now the only event in which the Bombers participate.

“There were times we played in South Carolina, Alabama, Oklahoma City and San Bernardino, but because of Mark’s schedule with “NCIS” the last five or six years, he only gets eight weeks off each summer,” Axelrod said. “Mark tries to rest a little and have a family vacation, so it’s hard to find the dates to do more than one of these weekends a year.”

A successful sports agent who inspires loyalty from his clients, Axelrod has convinced a number of luminaries to play these baseball charity events. “We owe the success of this event to Michael Wright, the guys at OSSO and the people at the Children’s Center. It has been a great win-win partnership,” Axelrod said. “We get a group of guys together who have a lot of fun for some good causes.”

The Oklahoma Kidz Charities Foundation, an outgrowth of OSSO employees, selected the Indian Clinic and The Anna’s House Foundation for the event’s proceeds. The foundation is a nonprofit organization dedicated to supporting other Oklahoma nonprofits whose values reflect enriching the lives of children, scholastic leadership, academic excellence and mentoring.

The weekend of June 1 and 2 kicks off with Stars and Strikes Bowling Night at AMF Boulevard Lanes at 3501 S. Boulevard in Edmond. Sponsored bowling teams organize well in advance of the June 1 evening on the lanes. The two-session bowling event also features live and silent auctions of many autographed sports and Hollywood-related items. Celebrities, including Harmon, often bowl on a team, mingle with the crowd, and sign autographs. The live auction usually features high bids on an exclusive walk-on part on “NCIS,” which Harmon donates each year, including travel expenses to Hollywood.

ESPN broadcaster Rick Sutcliff has donated four tickets to the World Series the past several years — often drawing some of the highest bids of the evening. Other bid items include those from recreation, health and beauty, art and culture, dining and entertainment and travel.

This year, at 3 p.m. on June 2, University of Central Oklahoma’s Wendell Simmons Field is the site for the charity baseball game. Gates open at 1:30 p.m. at the far north end of campus. Harmon often signs autographs before and after the five-inning game near his team’s dugout.

Harmon plays special agent Jethro Gibbs on the CBS series “NCIS,” finishing the past three seasons with the highest average Nielsen rating. Harmon is no stranger to competitive athletics, leading the UCLA Bruins as starting quarterback in 1972 and 1973.

“We’ve been very fortunate to have Mark Harmon and his friends help make this event a huge success so millions of dollars could be raised for several worthwhile charities right here in Oklahoma City over the past 12 years,” Michael Wright said in April. “We’ve enjoyed having this event as much as Mark and his friends have enjoyed participating and hope to continue for many years to come.”

Edmond residents attending the free charity baseball game should arrive as early as 1:30 p.m. Seating will be first-come, first-served, for this rare free glimpse of one of the most famous television actors of the past decade.