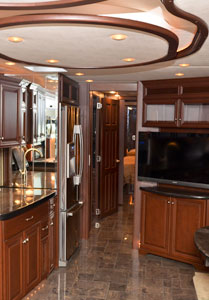 Unlike the laughable recreational vehicles made popular by such movies as Chevy Chase’s “National Lampoon’s Christmas Vacation” and “RV,” the luxury motor homes on Lee’s RV Superstore lot, 13111 N. Broadway Extension, are truly lavish homes on wheels. And then some.

Ginger-glazed cherry hardwood cabinetry, heated polished porcelain floors, Corian countertops and wall sconces are features most would be shocked to find in these top-of-the-line homes on wheels. But this list of high-end amenities only starts here. Also on that list would be four 40-inch LCD flat screen televisions with Blu-Ray players, Dolby surround sound, video game system hook-ups, and in-motion satellite viewing. Four zones of heat and air conditioning ensure that every area is comfortable for passengers.

The beautiful decorative ceiling boasts 56 different lights, most of which are recessed. Rows of channel lights line the kidney-shaped ceiling cloud, emphasizing the designer feature. The kitchen area might be small, but it’s filled with quality amenities equal to what would be found in a residential gourmet kitchen – a convection microwave, under mount Corian sink with a pull-out spray chrome faucet and a garbage disposal, a full-sized French-door style stainless steel refrigerator with an ice and water dispenser, glass cook top and even a hidden cabinet dishwasher drawer.

And although the interior is only about 400 square feet, the top-end motor homes have a full bath and a powder bath inside. The full bath has a separate toilet and sink space with a door for privacy, plus a glass shower with Corian walls and a teak fold-down seat, and another sink with ample storage and countertop space. All backsplash areas in the RV have designer glass tile accents to add that extra touch of class.

For sleeping, one of the soft leather seating areas in the main cabin encases a queen-sized pull-out bed, and the master bedroom contains a king-sized sleep number bed. The master closet is surprisingly large, with room for a stackable washer and dryer, a safe, plenty of clothes storage and even a built-in shoe rack. The entire master area is set apart with beautiful decorative sliding glass and wooden doors.

“Traveling in one of these motor homes really is like being at home. Once you’ve done (a long trip) in an RV, you won’t want to start a long trip any other way,” said Lee Litchfield, president and owner of Lee’s RV Superstore. Litchfield began with this company as a salesman in 1978. 18 months later, at age 22, he bought the company, which at that time was named Cagle and Eaton RV City. Then in May 1997, he opened the current location in Edmond along the Broadway Extension.

Litchfield knows from experience. His own family of four started with a tent trailer for camping trips. Then they upgraded to a fifth wheel – a motor home pulled behind a truck. But they got tired of not being able to utilize the motor home until they arrived at their destination.

“Our first real road trip was when my oldest was 16 and my youngest was 12,” Litchfield said. The two teenagers were not excited about making the two-week trek to and through California. But after driving in ultimate comfort and being able to see so much – they saw Yosemite National Park, Hollywood, Disneyland, the Golden Gate Bridge and the Grand Canyon twice – they loved it and that’s the only way they want to travel now, Litchfield said.

That’s why many customers buy motor homes, he said, because they have great memories of traveling that way as kids, and they want their own kids and grandkids to have the same experiences.

Even though the RVs weigh about 50,000 pounds, they have a unique steering system that makes controlling the vehicle easy with little effort.

“You can turn around a corner with one finger,” Litchfield said. “It’s a super power steering. When you go from driving the RV back to your car, it feels like (your car’s) power steering is out.”

The Comfort Drive System constantly re-calibrates for the wind and road angles, to keep the driver from needing to correct the steering for steady strong winds or the crowns built into most roads. Typically, drivers of cars keep to around six to eight hours of straight driving per day. With this driving system, you can easily handle 10 to 12 hours, Litchfield said.

“We drove to California a few years ago through a blizzard,” he said. “The wind was blowing about 45 or 50 miles per hour all the way across I-40. But we actually forgot all about the wind until we had to stop and get out, then it was like, ‘Whoa!’”

Typically the luxury RVs run between $200,000 and $700,000. They run on diesel, to keep fuel costs somewhat down, but even with the high fuel costs and low gas mileage, traveling by motor home is still economical when you factor in the opposing costs of hotels and restaurants, Litchfield said. In an RV, you don’t have to make as many stops, because you have restrooms onboard, and you can prepare your own meals when you want, while you are driving. You also get to sleep in your own bed, on your own sheets, with your own things around you. A huge benefit to RV travel, he said.

Litchfield also began his own small company, Custom Coach Manufacturing, to trick out custom motor homes for those clients who really want something unique. Custom Coach offers more than 60 different custom options, plus can trick out the RVs with nearly anything the client wants. Many of these clients are entertainers or large corporations.

Custom Coach customized Chesapeake Energy’s “Big Blue” – a motor coach with a dual-fuel system that runs on compressed natural gas and diesel. Big Blue was created basically as the ultimate tailgating party, Litchfield said. The interior has four bunk beds, each bunk with its own flip-down television with a DVD player. The exterior has four large LCD TVs under huge retractable awnings for big corporate presentations, or entertaining big client groups with watch parties.

“(We designed it) for champagne parties for a thousand clients,” Litchfield said. Big Blue has been all over the country – from Thunder games, to the Super Bowl, college bowl games, you name it, he said. When you have all the amenities of a luxury home on wheels, the sky is the limit.