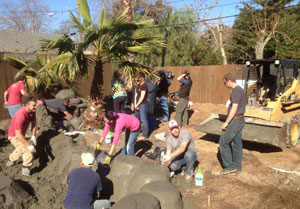 Donnie Price, owner of Stone Makers of Central Oklahoma, has seen his share of beautiful outdoor spaces. In fact, he’s made a few of them.

Price’s company uses a method in which a form of concrete is manipulated to replicate real stone. He’s created breathtaking pools, waterfalls, retention walls and fire pits, just to name a few. Stone Makers’ structures are stunning, built to last and even eco-friendly. Within a budget, they can design virtually anything. Their product allows them to create or re-create a surface that will stand the test of time and look gorgeous while doing so.

Now Stone Makers will get its spot on television on the DIY Network series “Turf War.” Airing every Friday at 8 p.m., “Turf War” features two neighbors with less-than-desirable outdoor spaces. With the help of professionals, a limited time frame and a theme, the neighbors split into teams and compete for the title of best outdoor space along with a $10,000 prize. Stone Makers will be featured in the June 8 episode.

Price was first approached to do the show when a dealer within their network, Brickwalls Construction of California, asked them to step in and help with a big project they were working on. Accompanying Price was fellow stone maker Jeff Keen. The two jetted off to Sacramento, California where within a matter of days, they would transform their homeowners’ backyard into an “Island Paradise.”

Though the Stone Makers product has previously been featured on the show, Price admits the experience of being on television was new to him. He had to get used to cameras following him around while he worked. He jokes that when laying cement, you can’t necessarily redo it if the camera crew needs to get a second shot.

At their initial viewing of their project, Price’s reaction to the homeowners’ yard was one of shock. “It was just demolished. It was overgrown and in disarray.” With a crew of talented professionals, Price’s team started in demolition: tearing things up and cleaning them out. “We had one tree guy who was amazing to watch. He was like a mix between a monkey and Edward Scissorhands,” he laughs.

With just two days to complete the entire project, the crew spent a good three hours creating a blank canvas in which to create their couple’s dream backyard.

Of course, on “Turf War,” even the homeowners get their turn with a tool or two. The couple got their hands a bit dirty and helped lay cement right alongside their team. Price says the two were grateful from the start, offering pizza to the crew and throwing a party for them when the project was over.

After demolition, Price’s group worked hard to give their homeowners something unforgettable. Think tikis and a tropical oasis and you’ll get the idea. In Price’s words, the homeowners were “floored” when they saw the results.

“You can never really tell what’s going to click with people,” says Price. Noting how tirelessly the team “bled and sweat” to create a unique water feature, he expected it to be the focal point in the mind of the woman. However, when he asked her what her favorite part was, she replied, “the steps.” Though a bit surprised by her response, Price admits how amazingly their cement product can use already-existing surfaces and make them look brand new, as they did with those steps leading into the house.

In actuality, every structure Stone Makers creates has been recycled from a pre-existing one. “It’s a very green process,” reveals Price. “This awesome water feature is somebody’s old driveway or somebody’s old sidewalk.”

And for those thinking that perhaps this product isn’t quite as sturdy as actual stone, Price says that it is actually two to three times more stable. So these homeowners won’t need another backyard redo anytime soon. Nor would they want to. The couple later thanked Price and his crew for bringing paradise to their backyard. They would probably agree that Price’s work on the show lived up to his work motto: “Exceed expectations, every time.”

Though the winners will not be revealed until the episode airs, Price reveals a tidbit you may or may not get to see on the show. In a side bet between the two teams, a member of the losing team gets the initials of the winner shaved into his head.

Be sure to tune in to see the blood, sweat and remarkable landscaping on DIY Network’s “Turf War” on Friday, June 8, at 8 p.m. and an encore at 11 p.m. Find Stone Makers of Central Oklahoma on Facebook for information on attending a watch party complete with door prizes the night the episode airs. For more information about Stone Makers’ products, go to www.stonemakersokc.com. 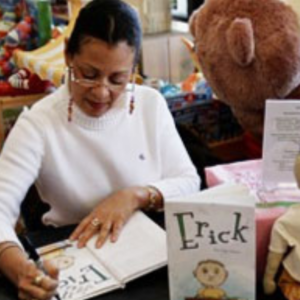 by Lindsay Whelchel
It was more than 22 years ago when Edmond resident Rita Gray-Martin encountered a young boy who was very angry. As a teacher, she wanted to convey to the boy that it was OK not to understand sometimes and that he was loved. To illustrate this particular lesson she decided to write a book. Now,...
Read More  >