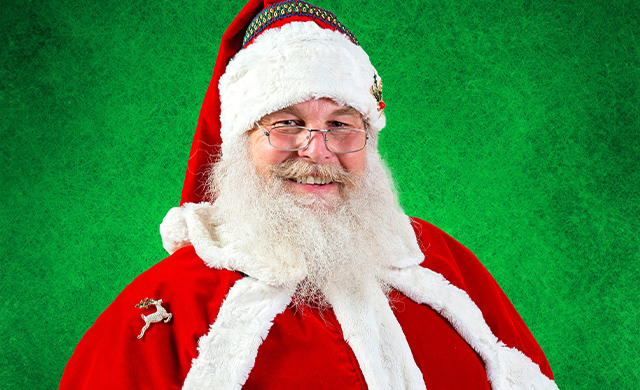 Who Is That Bearded Man?

How can you tell who the REAL Santa is? Is it the twinkling eyes? The “ho ho ho?” Or is it the beard? The men of the International Brotherhood of Real Bearded Santas know that to achieve the complete package—you have to start with the beard!

Santa Kirk Kahoe is aware of this first-hand, because children stare at him year-round, even though he’s wearing street clothes at the grocery store. The long, white beard is iconic. “Children look hard at me, and I know what they are thinking, so I smile at them and touch my finger to the side of my nose and tilt my head,” Santa Kahoe said. “Sometimes they get brave enough to ask me, ‘Are you Santa Claus?’ I ask them, ‘Are you being a good boy or girl?’ I always get a head nod.”

Santa Kahoe has worn a short, trimmed beard since he was a young man— but even back then, he knew someday, when his beard turned white, he was going to be Santa’s helper. A few years ago, that dream came to fruition when a friend, a Santa himself, needed a substitute. He said, “Your beard is the right color, but it’s not long enough. If you grow it, you could fill some gigs for me.”

So Santa Kahoe grew his beard. He called upon his favorite seamstress, his mother, to make him a Santa suit. He selected an old-fashioned, long style coat, which he describes as Santa Meets King Arthur. Since he and his wife dress up for medieval fairs, it was the natural choice. The outfit is completed with a homemade leather belt and an old skeleton key, which allows him to enter houses without chimneys.

“It takes me an hour to get ready. It’s very important that my beard is washed,” Santa Kahoe said. “It’s about eight inches long right now, and, let’s just say I have more hair care products for my beard than I do for my hair. I always add some peppermint oil so that I have that Christmas smell.”

The mission statement of the International Brotherhood is to “Put Christmas magic in the hearts of children of all ages.” Santa Kahoe’s first experience in his Christmas role was possibly more magical for him than for the children. He was invited to a party hosted by AMBUCS, an organization that helps children with disabilities. He remembers seeing three older children, siblings, look at him with skepticism—but after a moment, they all three rushed him and hugged him. “It almost made me cry.”

According to Santa Kahoe’s worldwide network of “real-bearded Santa buddies,” he knows the inevitable is coming. It’s just a matter of time until he gets a Christmas request he can’t fill. “Some child is going to want something that’s not a toy. It’ll be something heart-wrenching that only God can fix, like,‘Pleasemakemymomwell.’ Idon’tknowwhethertolookforwardto that or dread it.” No matter how that occurs, Santa Kahoe is glad to spread the Christmas magic. He’ll be busy this season, making appearances at parties and accepting childrens’ wish lists. He‘ll be smelling like peppermint and “ho ho ho-ing,” but as he and the brotherhood agree, one important thing makes Santa the most believable. It’s the beard.