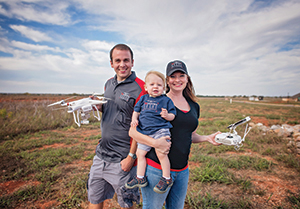 Aerial photography dates back to the mid-19th century, when enterprising photographers attached their cameras to kites and balloons in an attempt to capture the landscapes and cityscapes of Europe and the United States. Aerial photography played a pivotal role in both world wars, as both sides of the conflicts included them in reconnaissance efforts and in the preparation of battle plans. The profession flourished after the end of World War II as America enjoyed the economic boom of the post-war years, and is now used for a variety of professional functions including: cartography, topography, public utility planning and maintenance and others.

Oklahoma Drone Photography, led by the husband-and-wife team of Aaron and Alyssa Brackett, is based in Edmond and showcases industrial, commercial and residential properties. Using the stunning backdrop of the Oklahoma skyline as their canvas, the Bracketts combine artistic flourish and professionalism to yield magnificent results.

The growing popularity of drones for recreational and professional use caused the Federal Aviation Administration (FAA) to regulate the devices used for commercial reasons. Beginning September 2016, all commercial unmanned aerial veh